Find out what the #1 mistake that traders make is so that you never have to join them in it.

The ASX 200 looks at first glance quite comfortable close to highs investors won’t have seen for more than ten years.

Admittedly, the Sydney stock benchmark has failed to make progress so far above the 6266 point which marks those highs. That said it hasn’t fallen far since, despite the no-doubt tempting profits now on offer to investors who’ve been in for a while. It also doesn’t look terribly overbought, even at the current lofty altitudes. Its Relative Strength Index is flashing no warning signs. 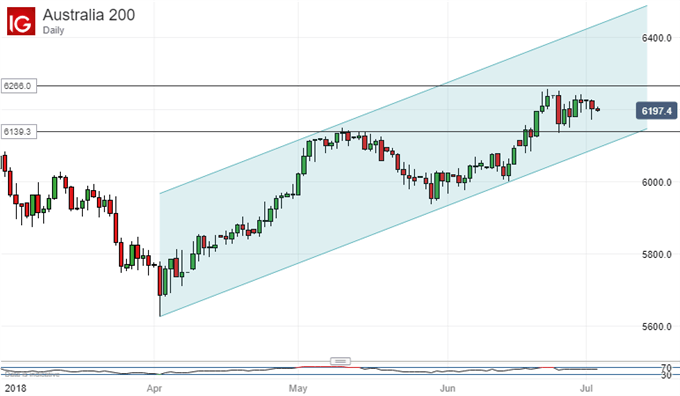 So, has the index got more to give?

Well, there seems to be a little pennant formation in the offing on the daily chart. This combination of lower highs and higher lows is generally seen as a ‘continuation pattern.’ That means that the previous status quo should be restored once it breaks. If so that would be good news for the bulls as it would clearly point to further gains. 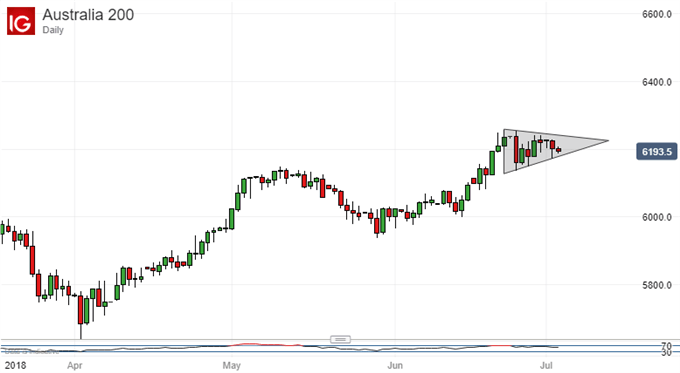 It might pay to be cautious though. The index is above the 6000 level, and that is a frontier it hasn’t crossed for very long in the past decade.

Moreover ,it’s probably worth noting that the index hasn’t been anywhere near the top of its uptrend channel since May and that, at 6433 or so, that top remains a very long way above the market. The channel base is a lot closer and comes in at 6076. This could be a sign of exhaustion, or, of course, it could simply mean that we now need a more relevant channel.

The best medium term plan now might be to watch that pennant and also to play cautiously for more upside as long as support at the current range base holds. That comes in at 6139.3.

Should that level break, it need to be catastrophic for the index by any means, but it probably would put focus on the downside and, specifically on retracement support. The first, 23.6% backtrack of the rise from the lows of early April to the peaks of late June comes in at 6109.7. That might be a level to watch if the pennant were to be invalidated and range support broken.