The ASX 200 has had a vigorous run up since the end of May, but it appears to be petering out before the previous significant peak has been surpassed.

That peak was the 6151 intraday high of May 10, which remains out of bullish reach so far, more than 100 points above the current market, a market which, in any case, seems to be retreating a little.

Still, in common with all other assets, the Sydney stock benchmark faces plenty of fundamental challenges this week. Interest rate decisions are coming from the Bank of Japan, the European Central Bank and of course from the US Federal Reserve. Added to all that is the summit meeting between Donald Trump and Kim Jong Un, taking place in Singapore at the time of writing.

It’s perhaps hardly surprising that markets should take a break until they’ve seen some or all of the above, and the ASX is probably no exception.

The index appears at any rate to have solid support at 5950.05. That’s the second, 38.2% Fibonacci retracement of the rise from April’s lows to the highs of May 10. It’s also more or less exactly where the index bounced recently, on May 29. That bounce took it back above the 23.6% retracement at 6027.1, where it remains. 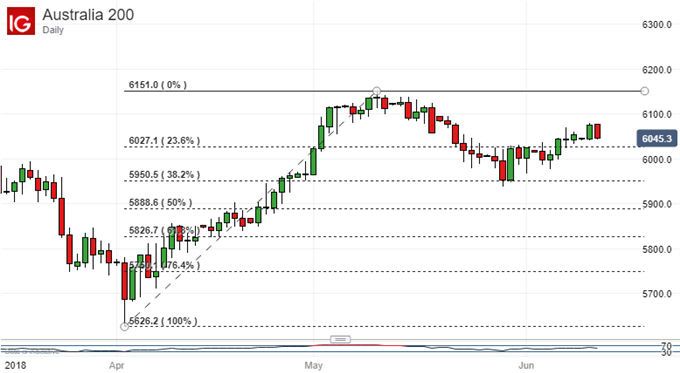 While that support looks solid, the moving averages could be sounding a note of caution. To be sure, the 20-, 50- and 100-day averages are in solid chronological order bellow the market. But the 20-day is within a whisker of crossing below the 50. While that need not be terrible news for the index, such a crossover is usually seen as quite bearish and may add some fuel to the thesis that its rise is indeed losing steam.

That said the index remains in a reasonably strong uptrend which still looks worth playing for now. If it endures beyond this week’s risk events then that in itself would be a positive sign. 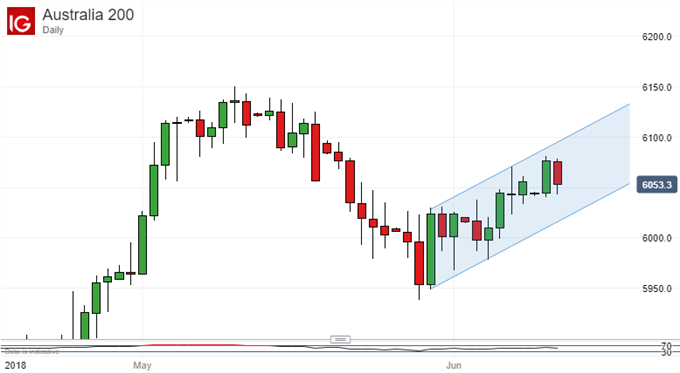 It might make sense to continue with it for the moment, if warily, supposing that support at 5950.5 remains solid.