The ASX 200 index remains in a mature uptrend, but one which is perhaps showing some signs of exhaustion even if outright reversal looks unlikely.

The Australian stock benchmark is currently towards the center of a rising channel which has been well respected since its inception back on April 3. Since then we have seen a long bounce from the preceding fall from this year’s peaks, which, while quite impressive, has shown no ability to regain them. It has also chimed very largely with a general global stock market revival, driven by hopes for US earnings which have largely been fulfilled.

As I have discussed before, the 6,000 level remains a very tough psychological barrier for this index, one whose approach understandably makes even many bulls quite nervous. The index can get there but, on past form, staying there is likely to remain a very big ask.

Unfortunately for those bulls the current uptrend channel bound is not only some way above the market, at 6022.9. It would also obviously require renewed comfort with the thin air above 6000 for a serious test. That does not look very likely anytime soon and, in any case, the channel’s upper limit hasn’t been tried since April 10. 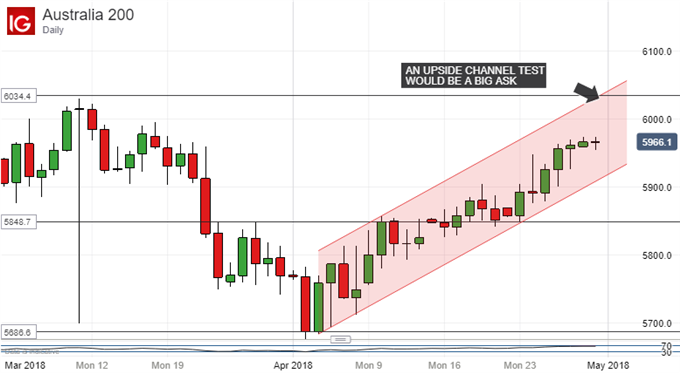 Moreover the index’s 50-day moving average is coming quite close to crossing below the 20-day. That would be quite a bearish medium-term signal and certainly bears keeping an eye on.

All up, it seems probable but not certain that the ASX is topping out around current levels a chart formation, which would mean that it has made a new lower high below this year’s top.

It might be best to continue playing that uptrend channel, but with a little more focus on its lower boundary as a likely target. Improved risk appetite from here could see the ASX above 6000 again, but extreme caution would probably be warranted in that instance.