The ASX 200 is flirting with a break of its previous range top but has yet to prove conclusively that it can thrive above that point.

The top comes in at 5851.1, which had previously capped trade since March 22. The index has been above it for a couple of trading days now, but only just. It is already testing the base of a nascent uptrend channel from April 2. That now comes in at 5823.4 and it is tempting to suggest that that level, at least, is going to have to hold if the bulls aren’t to seem exhausted. 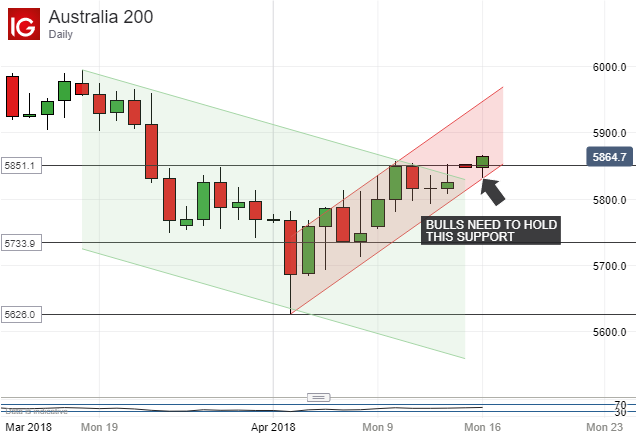 If they can consolidate above that line then a push back up to the previous peak of 5999.7 could be on the cards, but this index just can’t seem to get comfortable above the 6,000 level and there’s little reason to suppose that a current foray to that rarified altitude would last very long.

Looking to the downside, there is clearly strong support at 5826.0, which is where the index bounced back on April 2. Probably not coincidentally, this is also the lower boundary of the narrow trading band, which constrained ASX trade for much of 2017. That can probably be expected to hold if tested. 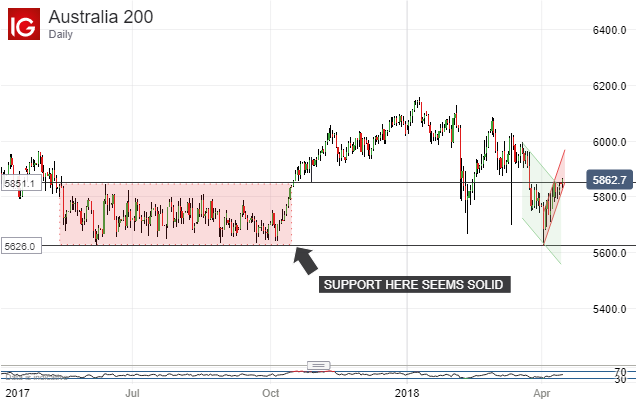 Fundamentally speaking, a strong US corporate earnings season is now hoped for. If delivered that may underpin global developed-market equity to some extent with the ASX probably no exception. Assuming no more gloomy headlines out of Syria it is hard to see a broad stock selloff while those hopes endure.

Watch the ASX closely for the next couple of days. If it can consolidate above its previous range then a push higher is likely, with 6,000 in the bulls’ sights again. But,bear in mind just how thin the index finds the air above that point.