The ASX 200 index seems to have validated its current trading range with a failure to crack the upside.

Tuesday’s peak of 5851.2 matched the range top, that peak having been seen previously at the end of March. 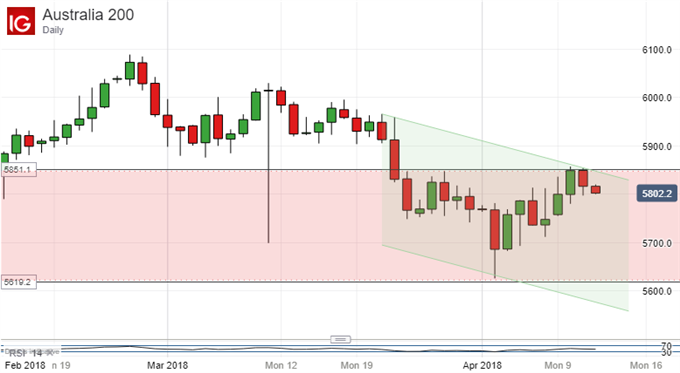 Having failed to top that point, retreats should find initial support in a band between 5733 and 5766.9. This range has constrained trade on a daily-closing basis since April 3. However, should it break ,then the lows of April 2 will come into play, and they are really all that will then stand between the Sydney sotock benchmark and its broader range low which comes in at 5819.2.

For now, that level looks safe enough even though the bears seem to have regained a little momentum. Much of this is likely due to diminished global risk appetite in any case. Worries about Western military intervention in Syria have joined fears for Sino-US trade on investors’ panic list. Of course. neither issue bears intrinsically on ASX valuations and snap-back in risk appetite could see the range top challenged again.

However, as this week fades out the path of least resistance still looks firmly downward.

It’s notable that the ASX’s failure at its range top also keeps it well within the overall downtrend channel which has pertained since March 21, and which it itself merely an extension of the long, gradual fall from early January’s high.

It’s probably best for now to simply play the limits implied by the range and channel in place, keeping one eye on the headlines. The ASX seems to be once again effectively trading the narrow ‘super range’ which kept it in check for much of the mid-part of 2017.

It will probably need a serious challenge to break it either way.