The ASX 200’s next couple of trading days could prove very instructive.

The Sydney stock benchmark bounced quite convincingly at the start of last week. It has since edged higher in accordance with a broad revival in risk appetite as the prospect of nuclear talks between North Korea and the United States overrides at least for the present worries about increased global protectionism.

However, that bounce seems to be running out of pep before it gets to the sort of levels which would suggest a meaningful consolidation. Late February’s peaks in the 60867 area remain the bulls’ first target and, so far, they aren’t showing any sign of the sort of vigor needed to get there. 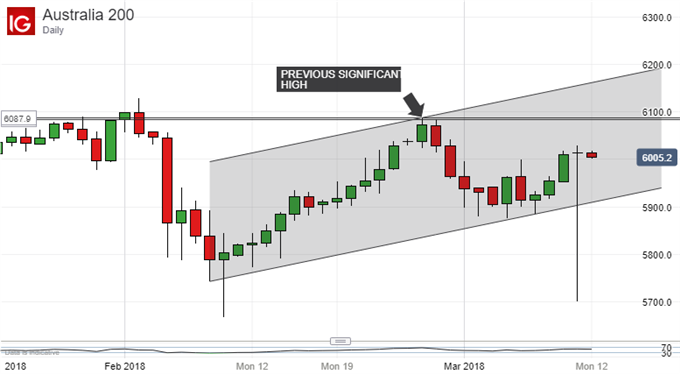 The acid test for this index remains as it has long been the 6,000 level. At face value what we are seeing here looks like yet another failure at that important point. So far so predictable. 6000 is both a milestone and a millstone which has effectively capped the market since 2008 and above which the ASX has never looked truly comfortable in its 18-year history.

With that in mind it’s hardly surprising that momentum should fade whenever that 6000 point nears. Sellers will be primed and even committed buyers will know it. They don’t call these things ‘psychological resistances’ for nothing.

It’s very likely that the next couple of days’ closes will bring another loss of nerve. If they do, then the index could face further falls, initially perhaps down to the lows of early March in the 5899 region. Below that, then early February’s 5777 will come into unwelcome focus for bulls.

However, it’s probably still worth noting that the index has been comparatively close to, or above the 6000 level for quite a long time now.

Indeed, it’s been within a couple of hundred points for most of the time since mid-November, 2017. Whatever else the approach of 6000 has meant this time, it certainly hasn’t meant the widespread profit taking which has accompanied it in the past. 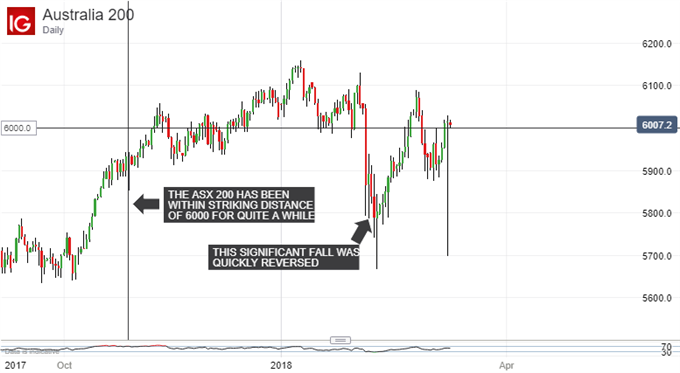 It’s absolutely not certain that the ASX is building a more solid base from which perhaps to attempt in time a more resolute foray above 6000. But neither is in entirely implausible either.

To be clear, that level is tough for the index and it probably makes sense to play for further falls should it give way once more on a daily or weekly closing basis. But it probably also makes sense to keep a close eye on how far these falls go.

The index certainly gives the impression of some underlying resilience here.