Trade all the major Asia Pacific economic data live and interactive at the DailyFX Webinars. Join me on Wednesday for live coverage of Australia’s GDP data release.

The ASX 200 is making heavy weather at present with the latest upward foray stopping just short of its previous significant peak.

The highs seen at the end of February in the 6088 region failed to hold in quite short order. The index has retreated more than 100 points since, abandoning the psychologically crucial 6000 mark yet again in the process.

Those highs in turn barred the way up to January’s peak of 6158, which was a summit not previously scaled for ten years. 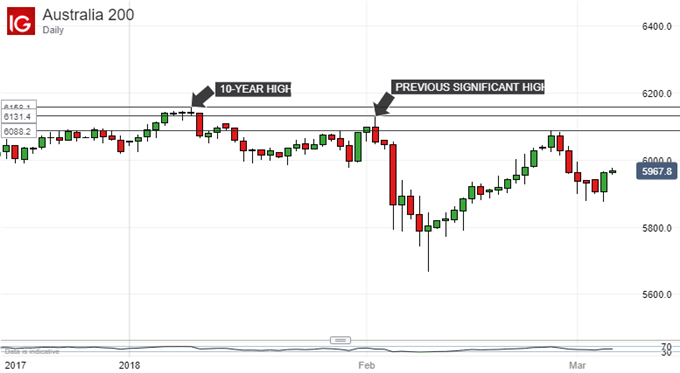 So what next? Well, the index certainly seems to be caught in a long meander lower, one that doesn’t seem likely to break conclusively unless it can show more comfort above that 6,000 point than it has for more than a decade. This doesn’t seem likely in the near-future, and various domestic risk events still loom this week. The Reserve Bank of Australia kept interest rates on hold at record lows Tuesday and stuck to old worries about stickily-low inflation and high consumer debt. However, still to come are Reserve Bank of Australia Governor Lowe’s speech in Sydney on Wednesday and the release of official growth data on the same day.

Both could cause some knee-jerk reaction either way for AUD/USD and, perhaps, for the ASX. However, it seems unlikely that either will be sufficient to conclusively break the current bias, which is clearly if modestly to the downside.

With that in mind keep an eye this week on Fibonacci retracements of the recent rise from the lows of February 9 to the last important high made on February 27. The first retracement gave way on February 28 when the 5988.88 level gave way. However, the second, 38.2% retracement broadly held at 5927.3 and, indeed, provided platform for the bounce we have seen this week.

Should it give way in turn, however, then the 50% retracement at 5877.6, and the 76.4% retracement at 57666.4 will come into downside focus. These seem likely to be short-term levels to watch once this week’s events have been dealt with. Bullish momentum won’t be regained at all unless that previous, 6088 peak can be regained and consolidated.

It’s probably worth pointing out that, while the ASX is currently languishing, it’s very broad, long-term monthly chart uptrend remains very much in play. That goes all the way back to the immediate post-financial-crisis days of 2009.

However, that uptrend is now clashing against all the psychological baggage brought about by an approach to 6000- a region at which the index has not looked truly comfortable for much longer than even than the ten years which have elapsed since its last visit.

It’s probably gloomily notable (if you’re a bull) that the index hasn’t spent much time attacking the top of that range since 2015. 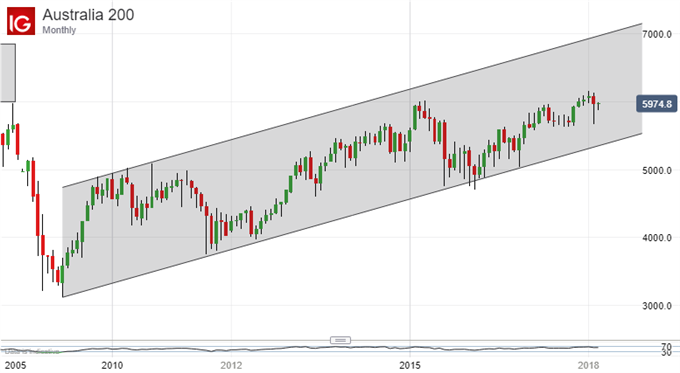 Whether you’re new to trading or an old hand DailyFX has plenty of resources to help you. There’s our trading sentiment indicator which shows you live how IG clients are positioned right now. We also offer trading guides, with one specifically aimed at those new to foreign exchange markets. There’s also a Bitcoin guide. Be sure to make the most of them all. They were written by our seasoned trading experts. Best of all, each one of them is free.