Get trading tips and join us to trade the major economic data live and interactive at the DailyFX Webinars. We’d love to have you along.

Riding a wave of general risk appetite which has lifted global equity into 2018, the ASX 200 has risen to highs not seen for ten years or so.

So far so good but we’re now into territory in which the index has only spent nine months since 2008. And even the last three months of that period were spent in what proved to be a long fall which took the index down to its ten-year lows.

That said there seems little cause for immediate alarm, despite current altitude. On the most basic level the index doesn’t look obviously overbought. Its Relative Strength Index is creeping up, to be sure, but it’s not yet flashing warning signals. Equally surely the Aussie benchmark is above its 20-, 50- and 100-day moving averages but not to any dramatic extent, especially in the case of the first two. They’re also arrayed in chronological order with none of the obvious crossovers which might flag a sentiment shift.

Moreover the uptrend channel from October 27 on the daily chart which I thought looked especially valid in my last technical look at the ASX still endures. October 27 was an interesting daily session in which the index saw some pretty wild intraday fluctuations but ended quite close to its starting level despite them. Such days can be indicative of momentary market indecision which shortly resolves itself. In this case the market decided that the bulls should win out.

In any case, the channel started then still bounds the market and still suggests that the index is heading higher. It suggests gradual gains, but they may be reassuring too, as anyone who has recently looked at a cryptocurrency chart might well feel.

Its notable though that the range hasn’t had a serious test since early December, when it survived a downside foray. It could then be time to look for more valid, up-to-date clues. We may find them in the newer uptrend channel shown below. As you can see it has been in place since that last test of the old channel, when the index bounced on December 6. 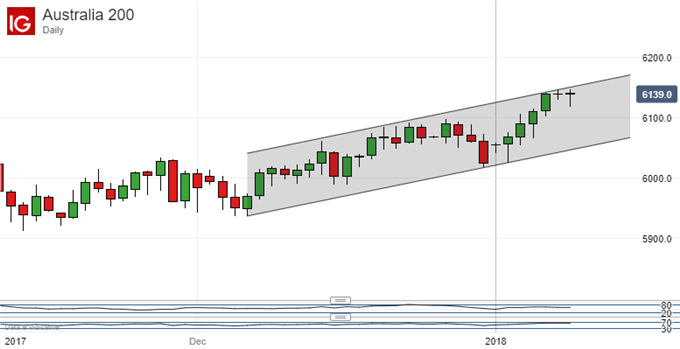 This band has just seen an upside test falter, if not yet conclusively fail. It suggests that support in the 6049 region will be where the index could bounce but, in any case, the survival or otherwise of this channel looks like a useful short-term indicator.