Trade all the major Asian economic data live and interactive at the DailyFX Webinars. Join us to share your take, or to pull ours apart! We’d love to have you along.

The ASX 200 has staged what could be an encouraging breakout. Well, it’s encouraging as long as you are not short.

Regular readers will know that I’ve been keeping an eye on a possible pennant formation on the daily chart for a couple of weeks now. The formation has received reasonable validation in the weeks since, with both support and resistance holding up.

The pennant is traditionally seen as a consolidative pattern, with the status quo ante likely to resume once it has played out. In this case there’s tentative reason for bullish hope. The downtrend which formed the pennant’s upper edge was broken on December 12 with a break of 6016.3. Sure enough the index has since remained reasonably comfortable above the 6000 line. 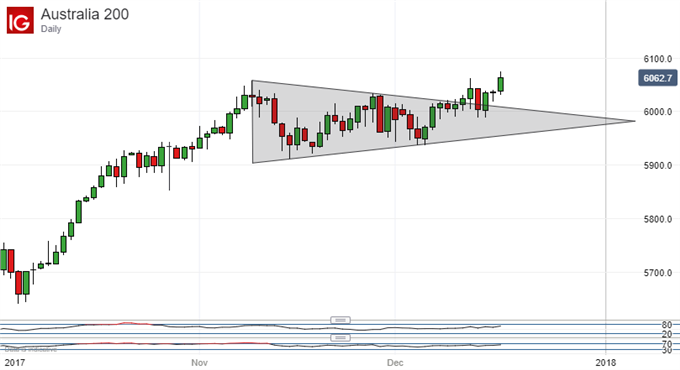 Indeed, the uptrend in place from the lows of October 6 seems to have fired again after taking a modest rest between mid-November and the start of this month- the consolidation period covered by that pennant. But some caution is probably still warranted. 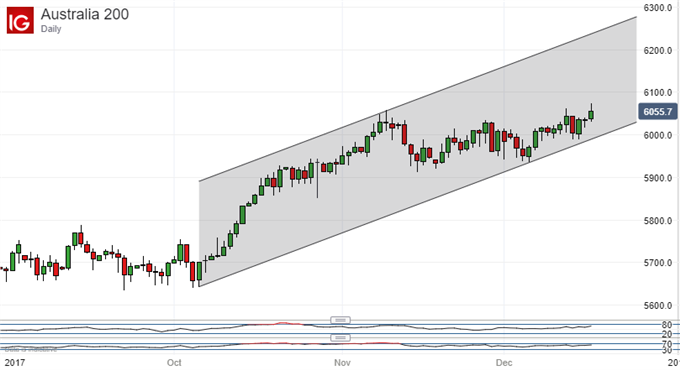 As I have noted before the 6000 level looms extremely large in the ASX’s recent psychology. It spent a few weeks above that line at the end of 2007, but since then has only managed a brief flirtation. There’s been no obvious rush to book profits above the line, which is encouraging. All the same you need quite a long memory to have made much being bullish at these levels. 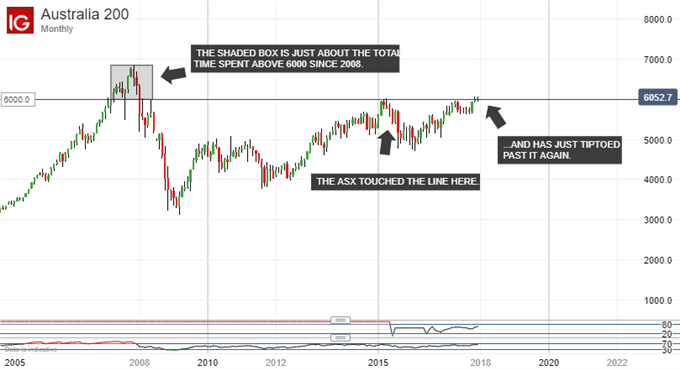 The ASX may well be gearing itself up for a big finish to 2017. A close above 6,000 would certainly be considered just that. But some caution on the long-term future of this level is surely warranted once the new year gets under way.

That’s not to say of course that we have to see an immedidiate collapse. Another look at that monthly chart above provides a glimpse of the quite notable uptrend still in place from the lows of 2009. But even a solid crossing of the 6000 line such as that we saw in 2007 will probably have a degree of hesitation about it. The holiday period will sap both liquidity and, probably, investor appetite for heroics.

With that in mind, note that the rise from October 4’s lows to current levels has Fibonacci retracement levels at 5972.5 (23.6% retracement) and 5909 (38.2% retracement). They might come under scrutiny should the index see any near-term rethink.