Get trading hints and join us for all the crucial economic data at the DailyFX Webinars. We would love to have you along.

There’s more than a touch of the Rorschach Test about the ASX 200’s daily chart right now, with the nature of what’s seen probably as dependent on the nature of the viewer as it is on any objective reality.

Some will take a look and conclude that they’re seeing a classic “double top” formation. That’s a perfectly supportable view on current evidence. The sharp climb since early October stalled once just above 6000. Now it seems to be doing so again. This could be bad news for bulls as the formation suggests that buyers are losing interest and that the next move will be down. 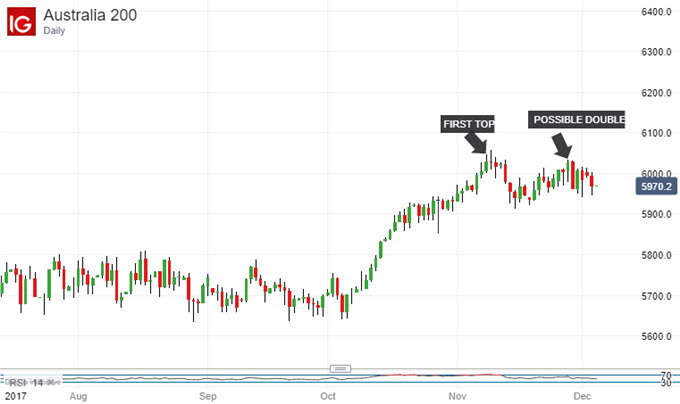 But here’s where the Rorschach element comes in. You can look at the same chart and see a quite different formation unfolding, arguably with just as much evidence. This is the “pennant” I talked about last week. The only difference wrought by the intervening seven days’ trading is that the flag’s upward boundary now looks more valid than it used to. 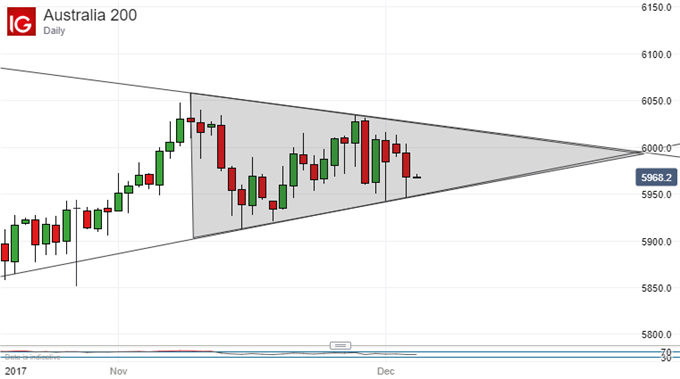 Now as I am sure you’ve noticed, one of these patterns just has to be invalid. The pennant is a ‘consolidation’ formation which means that, once it plays out, the status quo ante should be restored. In this case that suggests a further push higher into the realms above 6,000.

On the other hand, the double top, if validated, will mean that the entirety of the rise from October’s lows would come into increasing question.

So which scenario is really in play? Well, unhappily, things like momentum indicators, to which we might look for clues, are giving little away. The index looks neither strongly overbought nor yet oversold at current levels. This relative calm may speak to comfort at current levels, of course, but by the same token it offers us no clue as to which chart formation we may be dealing with. The moving averages are likewise orderly, with no bullish or bearish crossovers evident.

Nevertheless, at least one of these patterns just must be a mirage.

At this point therefore the uncommitted may be very well advised to wait and see which it is. Discretion is not likely to be a terribly costly decision as the denouement should be upon us within days. But this doesn’t look like the best time to back one or the other if you haven’t already made a call.