New to all this financial market trading? The free DailyFX guide is right here and it is all yours.

The ASX 200 has had a fabulous run higher but has arguably long needed a little pause for reflection.

Could it now be getting one? Very probably.

November 7’s push above the psychologically notable 6,000 level took the index into highs not seen for ten-years. This up-move came in concert with gains for global indexes and after this year’s long parade of record Wall Street highs. However, the push also came at the tail end of a febrile, month-long run up which had seen the index become quite severely overbought.

It is now testing the lower boundary of a short-term uptrend channel which has been just about in place since October 20. I say “just about” because the channel has already been penetrated to the downside once, on October 27. That day saw an odd trading session in which the ASX closed about where it opened despite trading a wide range. It’s possible that the index should really have begun to consolidate that day and that the push higher since has lacked much of the bullish conviction which preceded it. 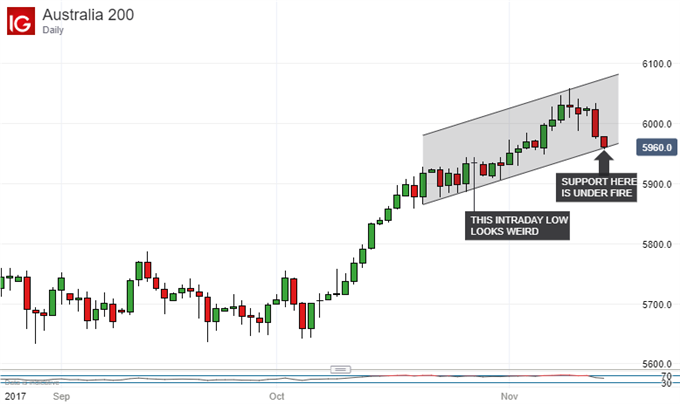 That’s not to say of course that anything more sinister need be under way, or that further, sharper falls need necessarily be feared. At current levels the ASX is within a whisker of the first, 23.6% Fibonacci retracement of its climb from October 4.

It’s reasonable to suppose that a much-needed consolidation is in place which will find support between here and the second retracement level. That comes in at 5899.0. 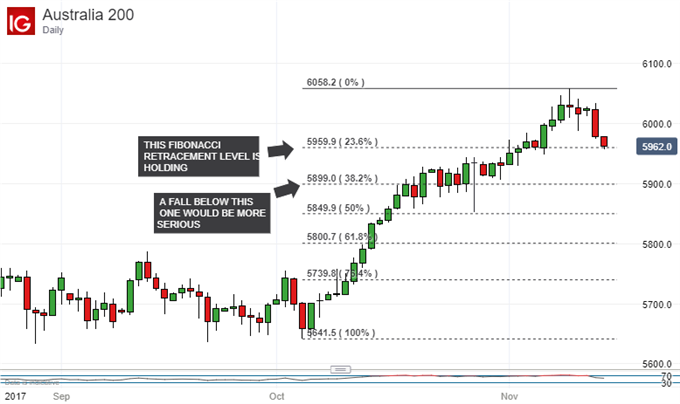 If the index slides below that level, then the bulls may find themselves with work to do if the entirety of that climb is not to come under question. A lot of near-term support would by then have given way.

Those bulls have got a a task on their hands anyway. They need to recapture that 6,000 level and make it a platform for further gains. Another failure to do will raise the risk of a bearish, “double-top” formation but, as things stand, consolidation and a further push higher looks like the most likely base case.

Right now the index needs to close above the 5952 level on a daily basis to keep its short-term uptrend on the rails. Watch that level carefully as Tuesday’s trading winds down.