The year’s final quarter is well under way, where will major currencies be at the end? Check out the DailyFX Technical and Fundamental forecasts.

The ASX 200 has gone from Bruce Banner to Incredible Hulk.

Confined to a mild-mannered, 160-point range for much of 2017, the index went berserk in October and finally caught the risk-on tailwind which had lifted Wall Street, Europe and the Nikkei.

That old range has been smashed to the upside, just as some market watchers were wondering whether it might endure all year. Not a chance, as it turned out.

The ASX has powered on up. On Tuesday it got back above the psychologically-important 6,000 point for the first time since the financial crisis took it below there all the way back in 2008.

What’s more it’s still sitting comfortably in the uptrend channel which has endured since the decisive turn higher seen on October 6. 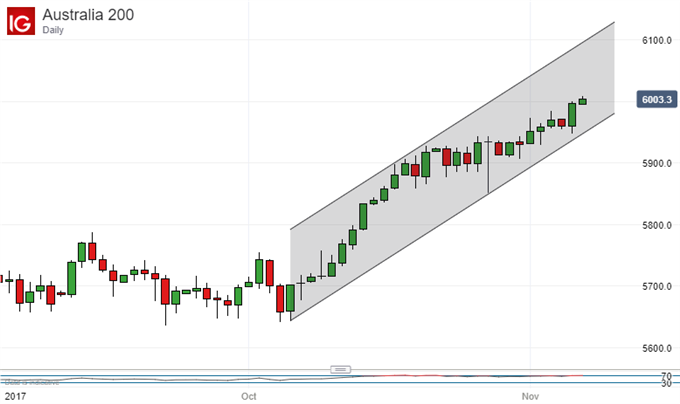 Naturally enough after a breakneck run higher the Sydney stock benchmark looks as though it could do with some consolidation. The Relative Strength Index stands at a frankly overheated 74 (anything above 70 usually suggests that overbuying is prevalent).

Fibonacci retracement of the rise from October 4 to date would suggest that support should come in at 5922.2 (23.6% retracement) and 5868.9 (38.2% retracement). Sure enough, the index would seem to have recent props there and it makes sense to suggest that reversals might be contained by this region. 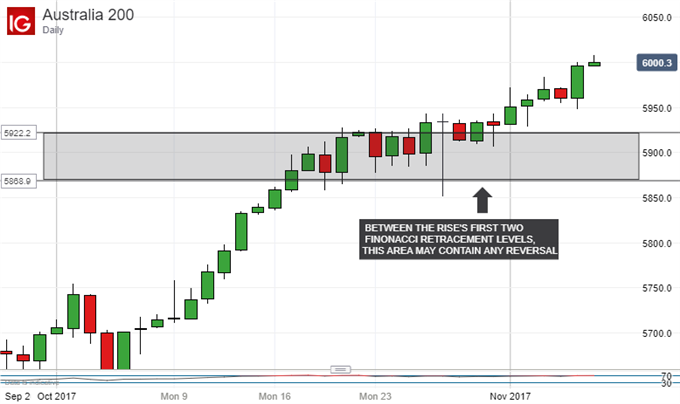 Despite overbuying the moving averages suggest that the index has yet more to give. Recent bullish crossovers of the 20-day average over the 50 and the 50-day over the 100 still very much in place.

But a word of warning about that upside channel might be in order. Its downside is only bounded by a single intraday low – October 27’s. That session’s wide range makes the fact that the ASX closed out just about where it opened. In short, the day’s action looks more than a little spurious and the upward channel, while impressive, probably needs some more downside validation.

After such a breakneck charge higher it’s tempting to assume that the slide, when it comes could be equally swift. However, despite a paucity of recent evidence about the ASX’s behaviour at this altitude, it’s probably worth at least pointing out that, the last time it was up here, it managed a relatively long stay. The index broke above 6,000 in March 2007 and stayed above that line until January 2008.