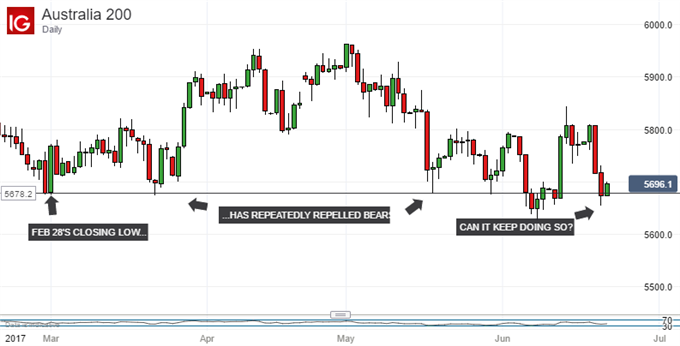 Keep your ASX 200 trading strategy in great shape with the DailyFX Trading Guide.

I’ve written before on these pages about the almost miraculous powers of February 28’s closing low on the ASX 200.

That level- 5675.30- has been the area at which the bears have been stopped just about ever since. Even when it did briefly give way, between June 7 and 10, there was no appetite to push matters far. The latest indication of that level’s power came on Wednesday of this week, when the ASX once again closed just about there, only to bounce into Thursday’s, current session.

In fact, the index remains effectively stuck in the tightening embrace of a downtrend channel in place since the highs of May 1 and that apparently crucial level of technical support. For the moment, it shows no sign of being able to spend any meaningful time outside those boundaries. But the distance between the two is narrowing and sort of crunch must be coming.

There could be reason for the bulls to hope that this contest may end, for now at least, with a push higher. At a relaxed 40 or so, the ASX Relative Strength Index suggests that the index is closer to oversold levels than overbought. And, significantly, the index is also below its 20-,50- and 100-day moving averages at current levels, too.

However, the short-term, 20-day moving average crossed below the 100-day at the end of May, while the 50-day crossed below it earlier this week. Both of these could well be bearish signs.

If the ASX can’t bounce more convincingly at that February 28 low than it has so far, then a more serious test of it could be on the cards. If it can’t repel the bears one more time, a more serious downside test is in the offing.