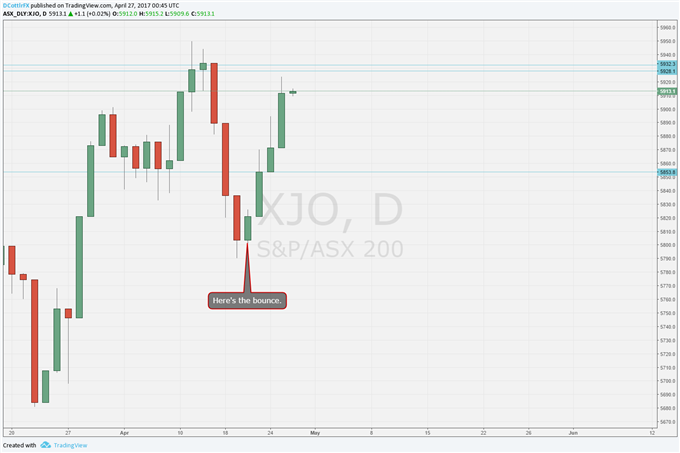 What will drive trends for the ASX 200 and other global equity indexes through mid-year? See our forecast to find out!

About a week ago the index bounced. Three days of falls took it down to the 5802 level before bulls stepped back in.

Here is that bounce:

So what? Well if we take a step back we can see that the bounce came in at an interesting point. It was just about bang on the lower bound of a rising channel which has held since mid-November 2016. That’s quite significant. 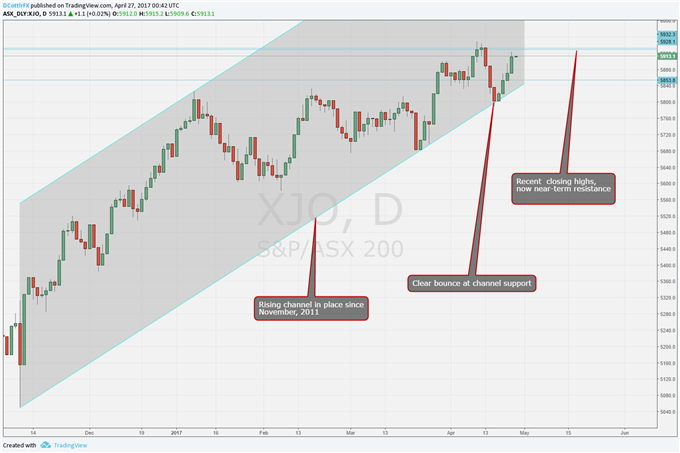 The Australian equity benchmark has since risen for four straight sessions and, at the time of writing – Thursday’s Asia Pacific morning – looks set for a fifth. These gains have almost wiped out the losses from the falls which preceded them.

And, for as long as this channel remains unbroken, then ASX bulls can look forward to an assault on the 6000 level. It’s now fewer than 100 points distant after all.

The bad news for them is that a successful one will be fraught. The index has not managed to consolidate above that level for very long since 2007. The charge upward in that year took it up to all-time record highs.

But its last flight into the rarefied atmosphere around 6000 was more recent and much shorter. Indeed it only lasted three months in early 2015 before asphyxia set in. The long, ensuing struggle for breath took the index all the way down to the 2016 lows of 4707.

So, the problem now is not that the ASX can’t reach 6000. It probably can. The problem will be investors’ memories of what happened the last time it did. They might make consolidation above that level a big ask with plenty of players probably all-too ready to take profit up there.