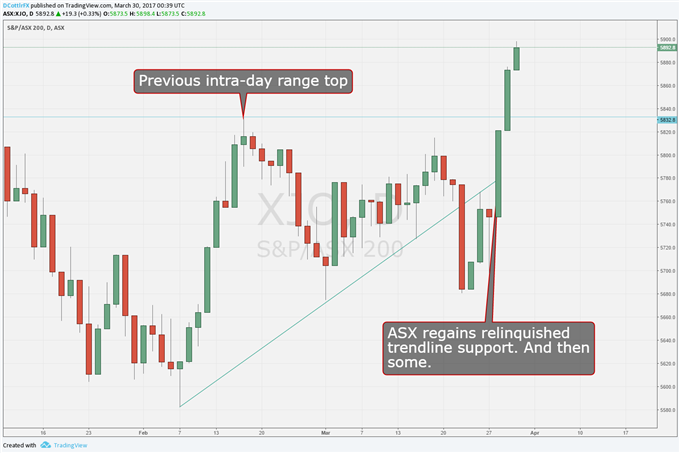 Just a few sessions ago it was skulking below trendline support, having tried and failed to crack the year’s peaks for a third time. But look at it now.

From the one-month low of 5681 hit on March 22 the index has surged more than 3%. With all the verdant green on the chart, the ASX even managed a daily close above its previous intra-day range high for the year of 5832. That peak had endured since mid-February but the index charged well above it on Tuesday and remains there.

Indeed, it’s now at its highest levels since April 2015.

Should the ASX manage to consolidate this admittedly very sharp rise, then investors will no doubt dare to dream about the psychologically important 6,000 point. But hitting that’s a tricky ask. The Aussie index last got tantalizingly close back in February 2015 before the bulls eventually gave up after four valiant attempts.

To stray from technical analysis just for a moment, the index also looks a bit pricey. It’s reportedly trading on 16.1 times forward earnings. And that’s about 6% above the five-year average. Admittedly investors have paid more in the recent past, but not often. Valuations have also been revised upward quite substantially, especially in the raw-material sector, but that good news is of course in the price and won’t necessarily be repeated.

More ominously a move to 6,000 would see investors paying above 17 times earnings, and that’s not a level they’ve ever been happy with for long. So, while sustained momentum could get the index back to “starting with a six,” it may not linger at those rarified heights without some better fundamental news.

Would you like to know more about financial market trading? The DailyFX Trading Guide is all yours.