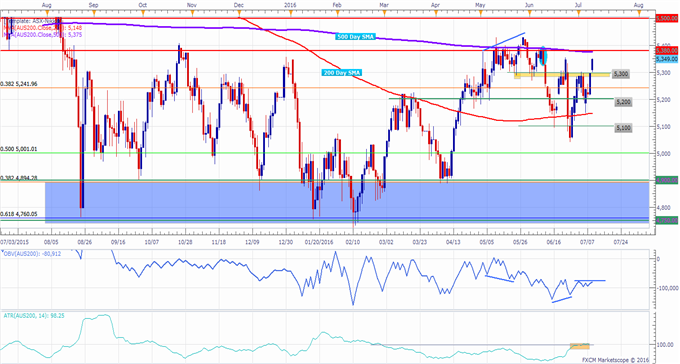 The ASX 200 is trading higher after breaking prior resistance at 5,300 to mark what appears to be another attempt to test its long term range levels.

The index has been trading for the past months in a well-defined range between the 5,380 resistance and the 4,750 support, which coincided with the 0.618 Fib level of the long term up trend leg from 2012.

At this stage, the index is facing a confluence of resistance levels that proved influential in the past; the 5,380-5431 range top coincides with the 500-day SMA.

Price might need to see a clear break and a hold above those levels to indicate that the bulls are really back in control, which could then potentially imply that the long term uptrend may be resuming.

In the meantime, the OBV indicates a slight divergence on the break above 5,300.

A move lower might put the focus on the 5,300 level again, which may act as support. If the index moves below the level, it might need to find a clear break below 5,200 and the 200 SMA before possible further support at the 5,100 level.

The ASX has seen volatility pick up after the “Brexit” decision, as ATR readings remain elevated. This could potentially assist breakout attempts.