AUD/USD has gone nowhere thus far this year, trading right where it was during the first week of January. But this doesn’t mean there isn’t a general tone still in place, as the trend off the March 2020 low remains intact even if momentum is lacking.

At times AUD has appeared poised to roll over, but found support before a down-move could gain any traction. This has created a series of levels and lines that are providing guides of increasing importance. The first comes by way of a trend-line dating back to early November.

Currently price is sitting just above this line with multiple touches occurring in the past six weeks or so. With each touch it grows in importance. In confluence with the trend-line is horizontal support dating to late February, and has acted as a meaningful level on numerous occasions as well. Much of the recent sideways chop has been along the ~7700 level.

Giving the broader trend higher the benefit of the doubt as well as a generally strong tone for risk and weak one for the dollar, AUD/USD appears poised to rally at some point. The 7800s have been problematic and could continue to be so, but something has to give eventually.

From a tactical standpoint, as long as support is holding then the worst AUD can do at this time is continue to trade sideways. Support is making for a good line-in-the-sand that longs can use to set stops and assess risk.

As far as would-be shorts are concerned, perhaps AUD is putting in a top, but as long as support continues to hold then price will remain buoyed. If support breaks with a solid daily close below 7675, then that could change and momentum may pick up to the downside. 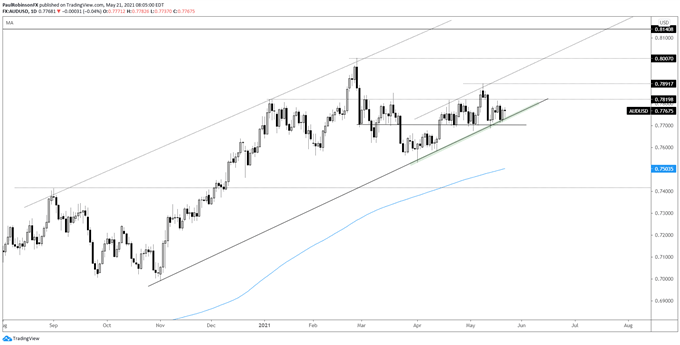