The Australian Dollar’s 33% surge from the March doldrums may prove to be the start of a prolonged period of strength against its US Dollar counterpart, as the break above long-term trend resistance hints a cyclical upturn is a foot.

The chart above highlights the cyclical nature seen in AUD/USD rates over the past 24 years, with the currency pair largely adhering to what appears to be an 8-year rotation. It has set significant bottoms in early 2001, late 2008 and 2016.

Recent price action is strikingly similar to that seen early in the bullish cycle ignited in September 2001 and could be indicative of further upside for AUD/USD, as price successfully breaks above the downtrend extending from the 2014 high (0.9505) and key resistance at the 61.8% Fibonacci (0.7207).

To that end, the trade-sensitive currency could be poised to substantially extend its recent 32% surge against its haven-associated counterpart, with cycle analysis suggesting AUD/USD may rise as much as 60% from current levels to eventually peak in late 2025.

As noted previously, AUD/USD appears to be gearing up to continue its climb towards the 78.6% Fibonacci (0.7573) after bouncing off Ascending Channel support and closing back above the 21-day moving average (0.7276).

That being said, a series of Doji and Hammer candles at the 2019 high (0.7295) hint at fading bullish momentum and could encourage would-be sellers if price slips back below the 21-DMA (0.7276), with a daily close below the September 17 swing-low (0.7254) needed to invalidate bullish potential and bring the psychologically pivotal 0.70 level into play.

However, with the MACD indicator continuing to track above its neutral midpoint and hidden bullish divergence seen on the RSI, the path of least resistance seems skewed to the topside.

Therefore, a daily close back above the September 16 swing-high (0.7342) would probably carve a path to retest the monthly high (0.7413), with a break above possibly signalling the resumption of the primary uptrend and bringing the 78.6% Fibonacci (0.7573) into focus. 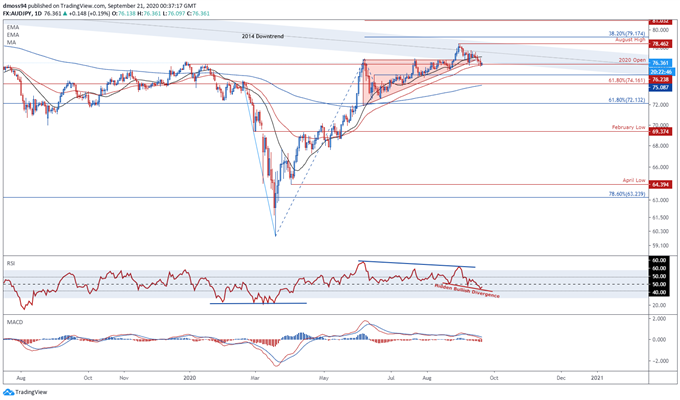 Bullish RSI divergence is indicative of swelling positive momentum and could ultimately lead to a retest of the August high (78.26), if buyers can overcome resistance at the 21-DMA (77.05).

A daily close above psychological resistance at the 77.00 level probably signals the resumption of the 6-month uptrend from the lows of March and could result in price pushing to test the 38.2% Fibonacci (79.17).

AUD/CHF rates look to be eyeing a push to fresh yearly highs despite failing to break above the September 2015 open (0.6717) and 2012 downtrend, as price remains constructively perched above the 21-, 50- and 200-day moving averages.

Moreover, with the RSI and MACD indicators tracking above their neutral midpoints and price carving out an elongated Bull Pennant just shy of key resistance, a topside surge to test the 61.8% Fibonacci (0.6862) looks in the offing.

A daily close above the September high (0.6713) is needed to validate the bullish continuation pattern and could see price climb 5% from current levels, with the implied measured move (0.7036) suggesting AUD/CHF rates could jump above the 0.70 mark for the first time since May 2019.