Australian Dollar bears have been battered over the last 3-months with the recent spike in the Aussie – driven largely by to investor risk appetite seeping back into the market – pushing spot AUD/USD higher by 4% since its October swing low. A plunge in currency volatility and rise in relative attractiveness of the carry trade have also helped facilitate the rise in spot AUD/USD.

Though AUD/USD prices now face an intimidating zone of confluent resistance that could possibly send the Australian Dollar pivoting back lower. The 200-day simple moving average illustrates the Australian Dollar’s long-term downtrend etched out since January last year, which is a critical technical level that may very well hinder further upside in the Aussie – just as it did this past July. 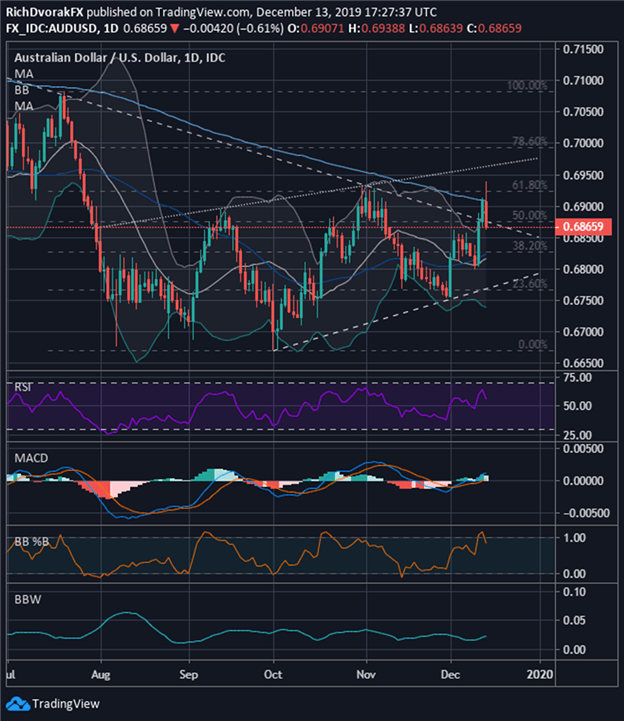 AUD/USD has peaked its head above the downward-sloping trendline extended from July 19 and November 05 intraday highs, however, and there has been a healthy rise in its relative strength index.

Though the 0.6925 price level – an area of technical resistance highlighted by the 61.8% Fibonacci retracement of its July to October bearish leg – has so far proved to be a daunting obstacle that spot AUD/USD has yet to overcome. Correspondingly, the Australian Dollar’s lack of follow-through on its recent topside breakout is a bit discouraging.

Yet, the Australian Dollar still has potential to keep rising with US-China trade deal cheerfulness likely to provide the Aussie with a positive tailwind. Likewise, there are several high-impact data releases and event risk scheduled on the economic calendar for next week which could provide fundamental catalysts for the next big move in spot AUD/USD. 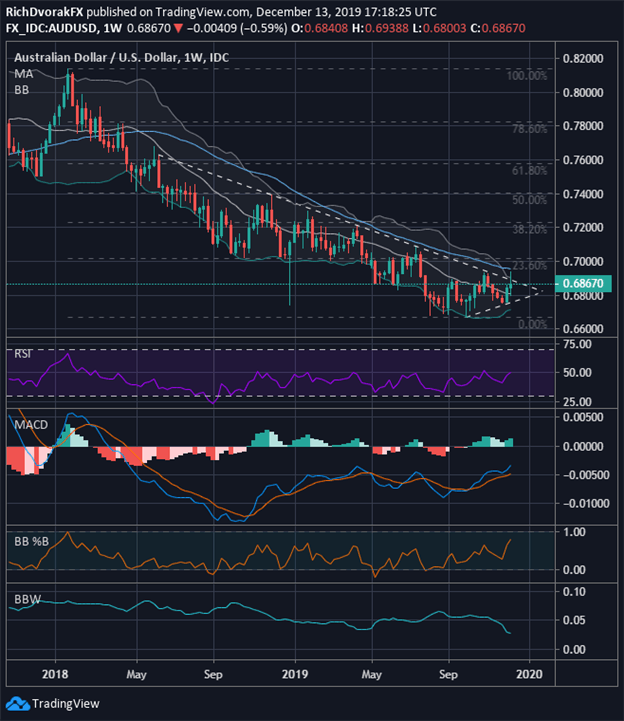 Turning to a weekly AUD/USD chart helps drown out some of the noise observed on a shorter time frame. The bottoming attempt by the Australian Dollar around the 0.6800 handle has likely contributed to the recent Bollinger Band squeeze – typically a precursor to a spike in volatility.

Although spot AUD/USD prices are currently riding the upper channel of its Bollinger Band, there are signs that the Bollinger Band width may be expanding which could enable a prolonged rally in the Australian Dollar.

That said, Aussie bulls could look to the psychologically-significant 0.7000 level as a possible upside target. On the other hand, spot AUD/USD remains at risk of reversing back lower until confirmation of a breakout higher is povided. Thus, the Aussie could still slide back toward the 0.6800 level before year-to-date lows come back into focus.