The Australian Dollar suffered a precipitous decline in July and August as trade war fears, a dovish RBA and a deteriorating global growth outlook worked to weigh on the Aussie Dollar’s prospects. Concurrently, the US Dollar (via the DXY Dollar Basket) drove higher. The diverging currency valuations saw AUDUSD drop nearly 6% from its July 19 peak to its August 7 trough. After bleeding lower throughout August, the Australian Dollar has staged an admirable recovery rally – climbing more than 2.5% versus USD in September thus far – bolstered by thawing US-China trade tensions.

That said, AUDUSD now nears technical resistance. Coupled with an uncertain fundamental backdrop, the technical price barriers could cause the rally to fizzle out. Currently trading near a horizontal level that marks various lows in May, AUDUSD has already exhibited some indecision despite the level’s limited technical merit. Therefore, subsequent resistance around 0.6909 – the pair’s July low – and the confluence of resistance around 0.7000, could look to offer more convincing rebukes.

As for support, the Australian Dollar may look to the 2016 low around 0.6828 before seeking subsequent assistance at the August and September lows slightly beneath 0.6700. Thus, given the bounty of resistance overhead and the slope of the recent rally, the Australian Dollar could experience a brief reversal to consolidate recent gains or extend the broader downtrend in earnest. Further, IG Client Sentiment Data reveals that retail traders are net-long which offers a bearish contrarian bias. 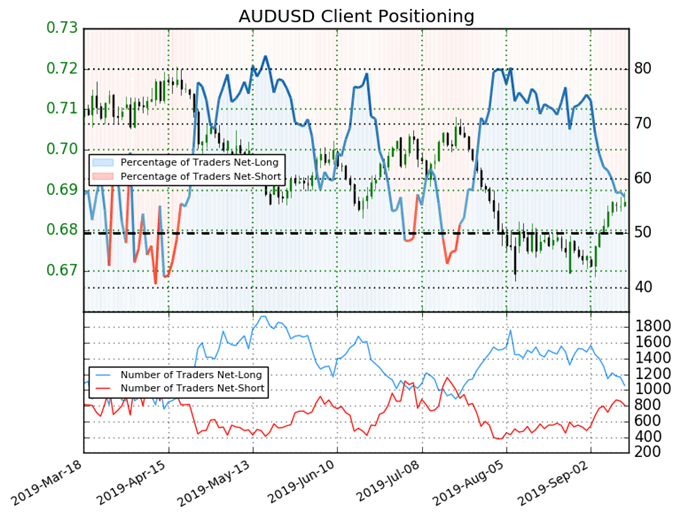 We typically take a contrarian view to crowd sentiment, and the fact traders are net-long suggests AUDUSD prices may continue to fall. Yettraders are less net-long than yesterday and compared with last week which undercuts the bearish bias as traders with long-exposure become less certain in their position. Consequently, IGCS data could suggest AUDUSD is at turning point. For further commentary on the pair and client sentiment data, sign up for my weekly sentiment walkthrough webinar or follow me on Twitter @PeterHanksFX.