The Australian Dollar continues to climb with the sentiment-linked currency extending its recent string of gains to 6 consecutive days. Since sliding to an 11-year low, Australian Dollar price action has perked up owing largely to the recent flood of upbeat market sentiment sparked by US-China trade war optimism. From a fundamental perspective, there is little on the docket in terms of event risk when looking at the Australian Dollar’s forex economic calendar. Consequently, it may prove beneficial turning to the charts for clues on where AUD currency pairs might head next. 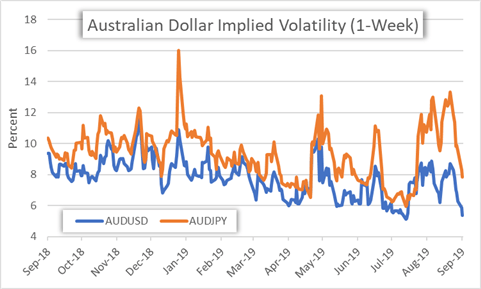 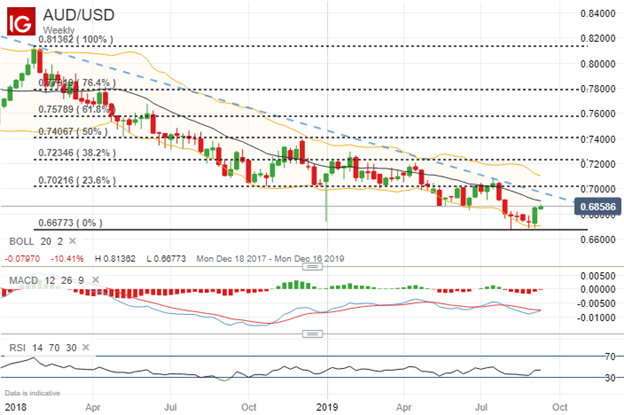 A triple bottom support zone appears around the year-to-date low printed by spot AUDUSD and speaks to the overall degree of buoyancy the Australian Dollar possesses near the 0.6700 handle. The sharp jump in AUDUSD off its recent bottom has helped the RSI escape drifting into oversold territory while also pushing the MACD toward zero, which suggests that an uptrend could be under development. If bullish price momentum continues, AUDUSD could climb onward toward the 7.0000 level. Then again, the 20-SMA and confluence close to the 0.6850 price area presents technical resistance that could spot AUDUSD swooning. 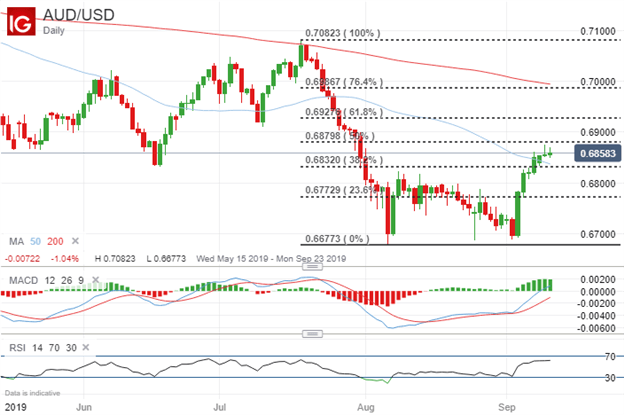 The sharp ascent recorded by spot AUDUSD since its recent low becomes more apparent when looking at the daily chart. Upward momentum could be waning, however, as the steep climb runs out of steam hinted at by the long upper-wicks as well as the wilting RSI and MACD indicators. Similarly, the Australian Dollar could very well be anchored to its downward-sloping 50-DMA, which could keep a lid on further upside as spot prices revert lower to its recent historical average. Also, the mid-point retracement of AUDUSD’s bearish leg from July 18 to August 6 may also pose as a headwind for Aussie bulls. 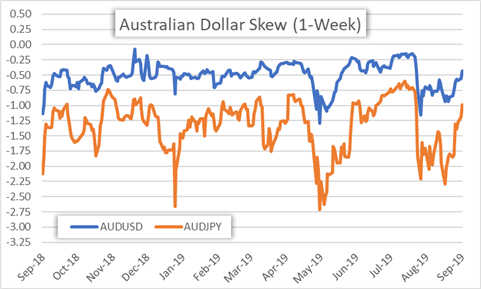 Looking at Australian Dollar risk reversals, however, we find that currency option traders are increasingly demanding more upside protection with 1-week skew readings rising for AUDUSD from -0.84 to -0.43 and for AUDJPY from -1.85 to -0.99. The change in risk reversals indicates the growing bullish bias among Australian Dollar currency traders seeing that a reading above zero suggests the demand for call option premium outweighs that of put options. 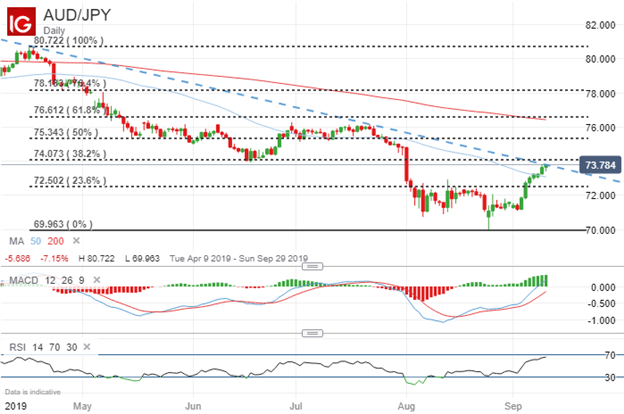 Nevertheless, it bears watching the technical backdrop forming on spot AUDJPY closely. In fact, we drew attention to Australian Dollar trend resistance yesterday as it could serve as a major obstacle for AUD bulls going forward. Spot AUDJPY is currently on the cusp of the major bearish trendline extended from its swing highs on April 16 and July 22. If the test of downtrend resistance holds, we may see Australian Dollar selling pressure resurface as upside prospects wane. Also, resistance stemming from technical confluence around the 74.000 handle is highlighted by the 38.2% Fibonacci retracement of the currency pair’s year-to-date trading range speaks to the headwinds faced by Australian Dollar bulls.