AUD/USD Technical Analysis: Ready for a Bounce to Channel Top?

We just released our 3Q forecasts for assets like equities. Read about how the sentiment-linked Australian Dollar could be impacted by them in the DailyFX Trading Guides page

The Australian Dollar has made remarkable progress to the downside during most of the second half of 2018 against its US counterpart. Along the way, it broke below a long-term ascending trend line going back to 2016, hinting that more declines were about to come. Indeed, that was the case and we are now testing lows set in May 2017 on the weekly chart below. A push under can further resume AUD/USD’s descent. 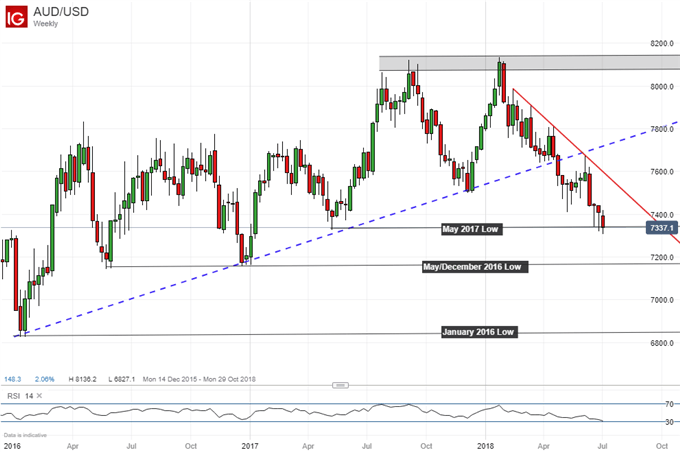 Looking at the daily chart shows a rather interesting development on the May 2017 low around 0.7340. First, the pair seems to be confined in a descending channel. Given that the lower line has held again, AUD/USD may rise ahead to retest the resistance line of it. Interestingly, the pair paused its decline on Monday right on the 50% midpoint of the Fibonacci retracement.

Australian Dollar bears should note that positive RSI divergence has emerged, showing that momentum to the downside is ebbing. While this does not guarantee that a turn higher may come, it should warrant some caution ahead. The pair may rise to the upper line of the channel but a break above it with confirmation may see AUD/USD continue pushing higher, perhaps eventually reaching the 2018 descending trend line.

On the other hand, a break below support via a daily close below 0.7340 exposes the 61.8% Fibonacci retracement at 0.7229. If the pair can get below that, the next target seems to by the May/December 2016 low around 0.7166. There may be some heightened volatility in the Australian Dollar given that July’s RBA rate decision is due later today. 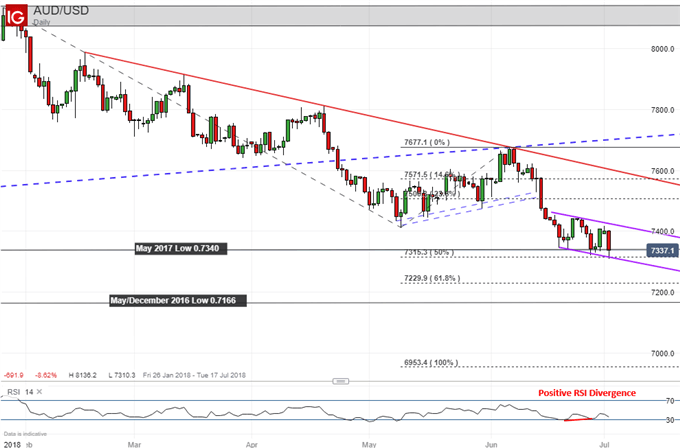