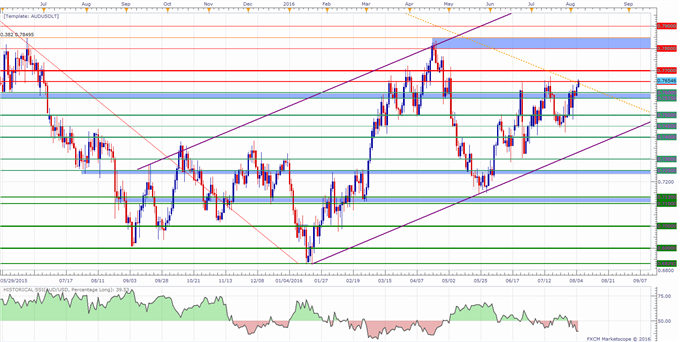 AUD/USD Technical Analysis: 0.7650 May Break on US NFPs

- AUD/USD found support below the 0.7500 figure after the RBA rate decision

- Further upside conviction might need to see a daily close above resistance at 0.7650

- US NFPs may prove to be volatile for the pair, technical picture could change after the outcome

The AUD/USD is trading higher after finding support below the 0.7500 level following the RBA rate decision (as we previewed here) in which the central bank opted to cut the cash rate.

The pair has bounced higher and now trades around resistance at the 0.7650 area, which coincides with a long term potential trend line resistance from 2013.

A daily close above this level could expose the 0.77 handle initially followed by what seems to be a significant area of resistance around the April highs, 0.7800 and the 0.382 Fib of the last monthly leg lower from July 2014.

A hold below the 0.7650 level might put focus initially on the 0.76 handle for possible support, followed by the round 00s and 50s that seem to be significant for the pair as of late, with the 0.75 level of specific interest after the pair found support there on the RBA.

US NFPs are on tap today, and volatility seems likely to pick up. This may imply that the pair could see a surge higher after the figures hit the wires or form a sharp reversal from current resistance levels.

Meanwhile, the DailyFX Speculative Sentiment Index (SSI) is showing that about 39.5% of traders are long the AUD/USD at the time of writing. The SSI is mainly used as a contrarian indicator, implying further strength ahead.