The Elliott Wave pattern for USDJPY favors a complex wave that began in December 2016 and is nearing completion. We are observing a channel line near 105 and the 78.6% Fibonacci retracement near 103 as potential reversal points.

We have been bearish USDJPY since January 4 awaiting a break of 111.98. On a subsequent sell off, we argued the pattern might see a continuation of the trend below the Sept 2017 low of 107.31.

Now that USDJPY has broken to new lows, what is next? The higher probability Elliott Wave pattern we are following is that USD/JPY is in a complex ‘B’ wave that likely holds above 103. Therefore, the majority of the trend may be behind us and the next higher probability trade may be to wait for a bottoming process to take place. 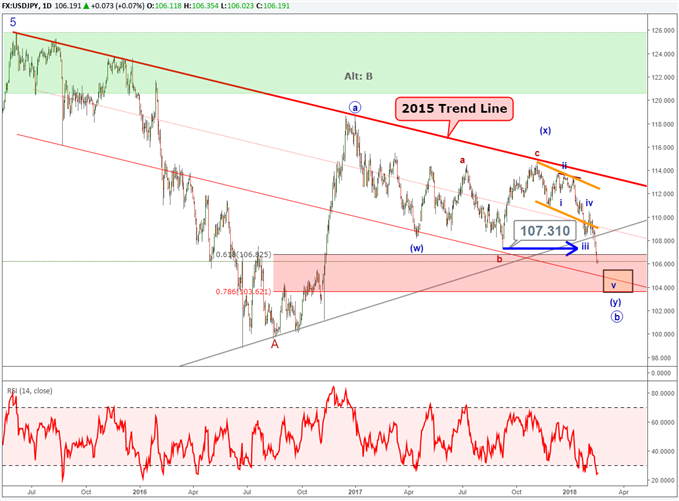 It appears the complex ‘b’ wave is the middle wave of a bullish zigzag. If this is the case, a bullish ‘c’ wave may begin above 103 to retest the December 2016 high near 118. 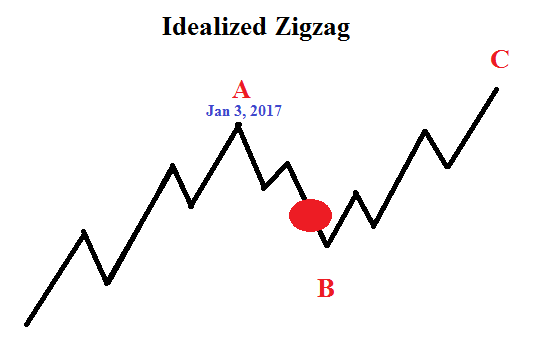 We are monitoring other alternative counts as well. Though we believe it is lower probability, we are prepared to consider the December 2016 high as a larger degree ‘B’ wave (grey label on the chart above). We believe this is lower probability because it implies a motive ‘C’ wave to new lows below 100.

The challenge with this alternative count is that motive waves need to unfold as diagonals or impulse waves. The move since December 2016 does not structurally fit into either in clean fashion. Therefore, we do not think it is higher probability, but if a correction sustains itself below 103, we will reconsider this alternate count.

USD/JPY Sentiment is Bearish for Prices

IG Client Sentiment shows the number of traders have been shifting net long over the past couple of weeks. This bearish signal implies additional losses in the near term. This sentiment picture lines up with the Elliott Wave forecast above. View how live traders are positioned with our IG client sentiment tool.

As a result, we consider this downward correction in USDJPY to be temporary and leading to a bullish wave beginning from above 103.