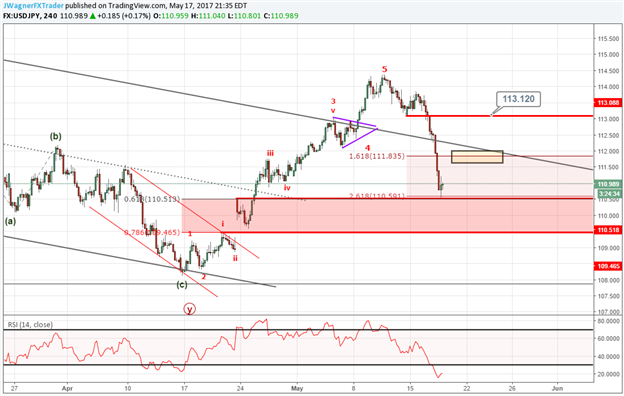 Today, USD/JPY finished down nearly 230 pips making it the largest one day sell off since July 2016. My colleague hinted that we might be on the verge of a market upheaval. In times of market duress, JPY strength (and USD/JPY weakness) has been a safe haven play and today USDJPY has lived up to that reputation.

Looking into the Elliott Wave picture the pattern that stands out the most to me is the five wave impulse that began on April 16, 2017 and finished on May 10, 2017.

Since we have a five wave impulse to start a new trend, we can imply a couple things on the current pattern.

First, the April 16, 2017 low of 108.13 likely holds as the current uptrend appears incomplete. Though this sell off has been sharp and aggressive, we will keep an eye out to see if the selling pressure abates. As a result, we will look for a partial retracement of the uptrend and seek out symptoms of a reversal higher. Today’s price action carried to the 61.8% retracement level of the prior uptrend. This price level also coincides with the April 23 high of 110.52. Perhaps a shorter term bottom was found.

In this same price zone is another wave relationship so we may see a bounce to 111.84 over the coming days. If this bounce occurs, the price action near 111.84 will tip the hand as to whether the near term sell off is over and the resumption of the uptrend proceeds or if the downtrend will continue lower.

Read the recent Dow Jones article and how today’s largest sell off since September fits into the overall Elliott Wave picture.