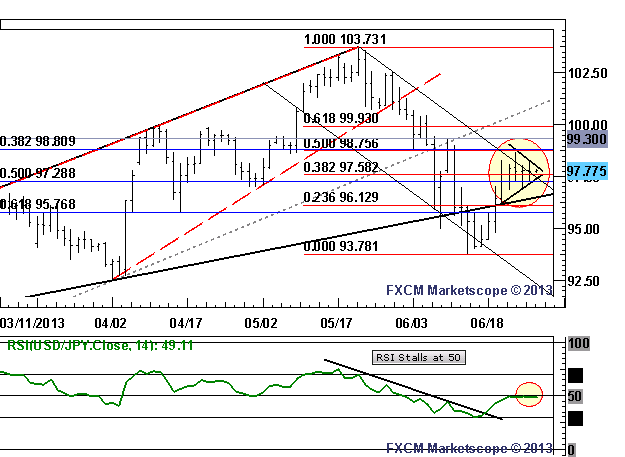 FOREX Analysis: Big picture: “The beginning of June yielded the start of a Bearish Broadening Wedge (off of the February 25 and April 4 lows), but near-term bullish momentum has signaled a false breakout now that the USDJPY rests above the wedge’s support, at ¥96.75/7.00 today. Although the USDJPY broke the RSI downtrend last week, near-term divergence has formed as the rally has seen RSI take out prior swing highs without the same occurring in price, as the pair has failed to achieve the 50% Fib retracement from the May high to the June low – the same occurred after the first major June low was set on June 7 (price rallied to 99.28, 50% at 99.35; now price has rallied to 98.70, 50% at 98.76 [blue line]). The 98.70 high this week also comes in below 98.80 (38.2% Fib February low to May high [red line]).”

FOREX Trading Strategy: No change: “With US Treasury yields screaming higher, a widening UST-JGB yield spread should be supportive of further gains in the pair. However, with the rebound from last week’s low to high resembling that of the rebound from June 7 to June 10, a fractal may be in play here hinting at further downside pressure. A break of 98.70/80 necessarily points to 99.25/35 (post-May NFP swing high). Lower, 96.15/20 (23.6% Fib May high to June low [red line]) and 95.75/80 (61.8% Fib February low to May high [blue line]) are support. A near-term bullish bias is warranted as long as price holds 96.65/80; a medium-term bearish bias is warranted as long as price holds 99.25/35.” A Symmetrical Triangle has now emerged after several days of consolidation; the aforementioned bull/bear demarcations are still appropriate.