It appears the current Elliott Wave count for crude oil is wave (c) of circle ‘y’. With circle wave ‘y’ being a zigzag pattern, that means wave (c) is a terminal wave. Therefore, when this current wave finalizes, a large reversal may be at hand. The two day price chart shows some overhead supply and resistance forming near 77.31 and 80.

Back in June 2012, crude oil prices were supported at 77.31. This level has subsequently broken and therefore, 77.31 may act like resistance moving forward.

Many times alternating waves are equal in length or have a Fibonacci relationship with one another. Circle wave ‘y’ would be 61.8% the length of circle wave ‘w’ near 80. If crude oil prices do increase further, we will monitor the 80 level as a potential reversal zone.

There is a cluster of support near 65 so this will be the key level for maintaining a bullish bias. If crude oil prices do reverse and break down below 65, then we will strongly consider the top is in for crude oil leading to a multi-week correction. 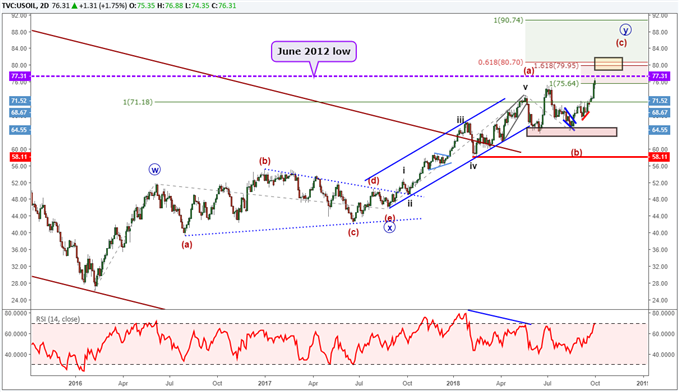 After wave ‘Y’ prints, a deep retracement typically occurs. It could be another ‘X’ wave or a deep correction that retraces the entire two-year uptrend. Either way, the odds are high that a deep correction occurs once the final sub waves of ‘y’ are in place.

Natural Gas prices have increased from previously forecasted longer term pivot levels. At this point in the Elliott Wave chart, we are uncertain how much further Natural Gas can rise as we have competing bearish and bullish patterns at play.

The bearish Elliot wave pattern we are following is that of a large complex correction that began from the 2016 price high (left side of the chart above). As the name states, this pattern is complex and may turn lower from levels just above current prices. At 3.28, wave (y) is equal in length to wave (w) so it may be a near term pivot level. Around 3.40, the blue resistance line crosses so it may provide resistance to natural gas prices too. The challenge with this wave count is the visual structure. The form of the waves are not an ideal shape of a (w)-(x)-(y) pattern.

If this wave pattern were correct, a dip back to 2.80 and possibly 2.53 would be considered normal.

We can also identify an unfolding bullish impulse wave that may drive Natural Gas towards higher levels (right side of chart above). Here, the shape of the pattern looks more ‘normal’, as the current Elliott wave count would be wave (iii) of circle ‘3’. However, the sub waves of circle ‘1’ are not the cleanest and incorporate doubt into this outlook. In the bullish pattern, dips would prove temporary and would be buying opportunities. So long as Natural gas prices remain above 2.97, bullish outcomes ought to be respected for a retest of the 3.90 high.

If you are not sure if Elliott Wave is for you, consider reading some materials with some commentary on the habits that make successful traders.