GBP/USD Hanging Over the Edge of a Cliff

In our last report from September (I’m sorry it has been soooo long), we noted that even though Bank of England is on a path to hike rates, the technical picture for GBP/USD was not as rosy. At that time, we suggested that Cable was in a terminal wave at three different degrees of trend and that a bearish reversal may be looming overhead.

It turns out the high for major wave (4) was registered the day before the previous report and we are recording the major wave as a complex W-X-Y (zigzag-triangle-zigzag) correction higher. As a result of major wave (4) being set, GBP/USD has begun to sell off in major wave (5). As previously noted, major wave (5) has a high probability chance of retesting 1.19 while holding below the September high of 1.3658.

See our GBP quarterly forecast anticipating a correction down to 1.19. 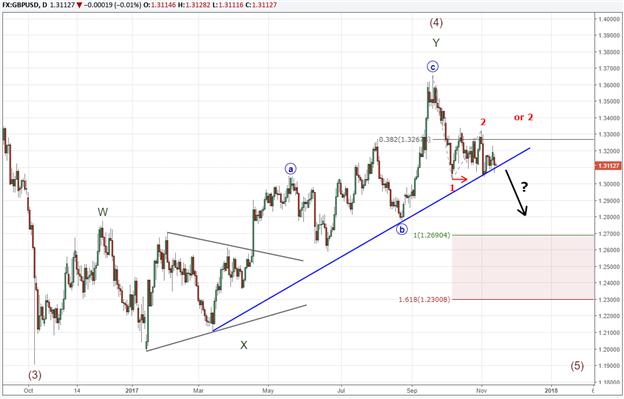 From a technical perspective, Cable is hanging on to the edge of a cliff (the blue trend line) noted above and we believe this trend line will eventually fail leading to more losses.

From an Elliott Wave perspective, GBP/USD may be consolidating in a sideways second wave before beginning a third wave plunge. It is possible prices may bump higher to test the range high prior to embarking upon a third wave lower. Either way, the higher probability move is for GBPUSD to break the trend line that opens the door for a longer term retest of 1.19. 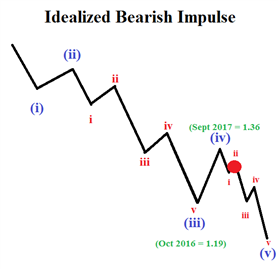 Sentiment is currently expressing a bearish signal at +1.2 and the bullish traders are growing. For those familiar with sentiment trading you will recognize that as a bearish signal for GBP/USD. Therefore, live trader positioning lines up with the Elliott Wave count and we prepare for a break lower in Cable.

Bottom line, when looking at the intraday chart above, we are anticipating a bearish break of the trend line that pushes towards 1.27 in the medium term. A bump up to 1.33 would be considered normal so don’t be alarmed if that occurs. So long as prices remain below 1.3658, we will maintain a bearish bias. 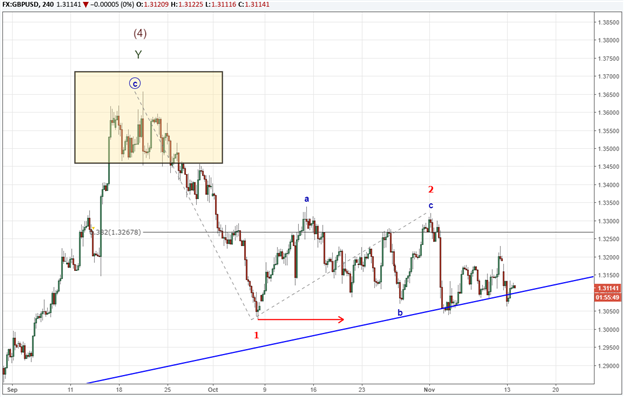 For further study on Elliott Wave patterns, watch these one hour long webinar recordings devoted to each topic. [registration required]

USD/CAD dives 200 pips, will it continue?

USD/JPY stalls but holds above support.