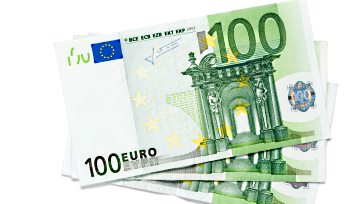 The Elliott Wave pricing model we have been following for EUR/USD indicates an incomplete pattern to the upside. Our previous report stated,“from a shorter term perspective, if the wave labeling is correct, then we anticipate a shallow correction back to the 1.16 handle.”

Now that prices dipped to 1.1662 on October 6, the fourth wave is maturing as expected. When this fourth wave terminates (if it has not already), we will look for a final ending wave higher to retest 1.20 and possibly 1.22.

Though EUR/USD has felt pressures from a Catalonian vote and a more hawkish Fed, the technicals are painting a picture of support to eventually emerge for the pair. The two main Elliott Wave models we are following show we are in a fourth wave. The models differ slightly on the shape, depth, and structure of the fourth wave and let us unpack those scenarios with more detail.

In the image below, the wave count on the left implies a fourth wave triangle. Under this scenario, EUR/USD is forecasted to rise modestly back towards and possibly close to 1.20 but would need to remain below 1.2092. During this modest rise, EUR/USD would also need to hold above 1.1662. This modest rise would make up the ‘d’ leg of the five wave triangle. 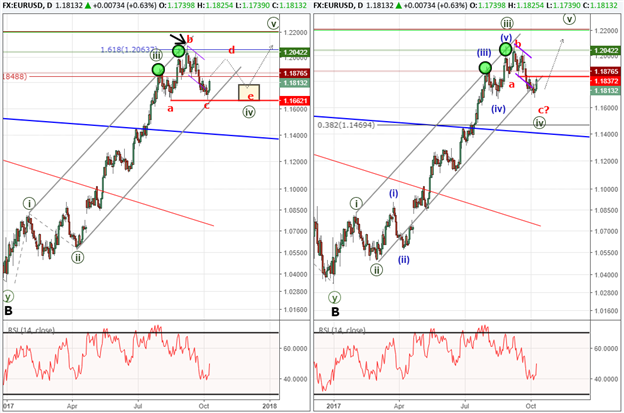 What is interesting about the triangle scenario is notice how the ‘b’ wave stopped and reversed near the 1.618 level of the ‘a’ wave. It is common for ‘b’ waves of triangles to overshoot like this and typically, that overshot distance is contained to less than 1.618. The overlapping nature of the waves since early August also suggest a larger correction.

The image on the right illustrates a fourth wave flat pattern. It is possible to count the flat pattern as finished, though ideally a retest and break of the 1.1662 low would help the structure appear more normal. A key level we are watching for this pattern is 1.1837. So long as EUR/USD remains below this price level, then the door is open for a deeper correction and the flat pattern remains viable.

Why do traders lose money? This could be why.

Unsure of the longer term direction of EUR and USD? Grab these quarterly forecasts.

Are you new to trading the FX market? This guide was created just for you.

How Much Further will Dow Jones Industrial Average Trend Continue?

Last Time This Happened in EURUSD was 1 Year Ago
Advertisement