Ethereum’s coin, Ether, has carved out a pattern pointing towards a large rally potential according to Elliott wave principle.

Eth/USD 2019 Forecast was for a strong rally

Ethereum initiated a strong rally from its bottom on December 14, 2018 taking the shape of an Elliott wave impulse pattern. This impulse was followed by a corrective set back from the June 2019 high of 364 to the September 2019 low of 152. This pattern is a 5-3 pattern and suggests more bullish price action for ether on the horizon.

Last November, we were anticipating a large gain in the cryptocurrency according to our Elliott wave analysis :

“…we can count the minimum waves in place to suggest a large rally may form nearby if it has not begun already. If the rally is successful in forming, Ethereum may rally to 225 and possibly higher levels.” 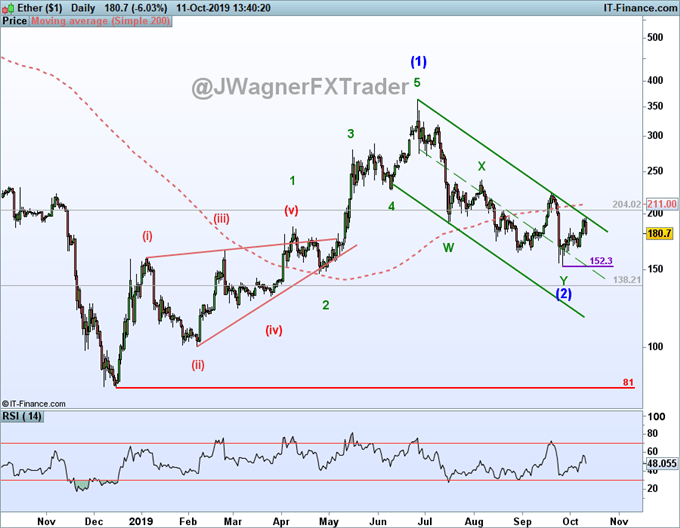 With the 5-3 pattern in place, we believe those waves represent a larger wave (1) and (2). As a result, if the rally continues to develop from the September 26 lows, then the cryptocurrency is rallying in a wave (3). Wave 3’s must make progress over the distance of wave 1. Therefore, the Ethereum forecast is for continued gains and new highs above 364.

As we are considering this to be a wave 3, even higher levels are forecasted possibly up to 600 and 1000.

The key level to the current forecast is the September 26 low of 150. A move below 150 does not negate this longer-term view, but simply delays it.

At the current price juncture, ether is struggling to rally above the channel carved by wave (2). A break above the green resistance trend line will increase the probability that the low is in place.

If ETH/USD is successful on rallying higher, we will consider moving the key level to the bullish forecast higher too.

Ralph Nelson Elliott discovered nearly 100 years ago that markets move in patterns of five and three waves. These patterns are then sewn together to create even larger patterns. As a result of these patterned movements, trend direction and key levels can be determined creating a market forecast. Learn more about Elliott Wave Theory with the beginners and advanced Elliott wave guides.

Discuss this market with Jeremy in his US Opening Bell webinar.