Dow Jones Industrial Average is trying to finish the week on a higher note as it is up fractionally since last Friday. The DJIA is drifting higher for the past week, momentum oscillators and Elliott Wave models are flashing yellow lights.

In our previous report we shared how a cluster of wave relationships and trend channels are converging near the current DJIA price level. DJIA appears to be respecting these levels as price has been unable to punch materially higher.

Oscillators, such as the Relative Strength Index (RSI) are diverging with previous DJIA price peaks indicating momentum is slowing and possibly at risk of a reversal.

Wave (v) is painting a compelling picture of at least a shorter term correction. When you connect wave (ii) and wave (iv) with a trend line and duplicate it to the top of wave (iii), many times wave (v) reaches the top of that channel. That is where DJIA is currently parked so the odds of a reversal or increasing.

In situations like these, traders look to tighten up risk levels or lighten exposure in the market in case of a correction. We feel like there are two compelling patterns to keep an eye on. One is a deep reversal and the second is a more shallow reversal to 20,371 to 21,600.

Bottom line, the current trend is still considered higher so we are not looking to position short. We are seeing yellow lights flashing so look to tighten risk and begin to identify bearish patterns if they print.

The DJIA trend is quite mature so have an exit plan ready before you enter. Read other traits we found of successful traders here.

EURUSD pattern looks to be attracted to 1.20.

DJIA doesn’t look like the only market with a big reversal nearby. GBPUSD approaches an important long term price zone too.

USDJPY Advance May Kick Off a New Uptrend

Elliott Wave Patterns: What is a Zigzag? (Educational)

Other Elliott Wave resources include one hour webinar recordings on the specific patterns:

How Much Further Will Dow Jones Industrial Average Trend Continue?

Dow Jones Industrial Average Flying with Wind Beneath Its Wings 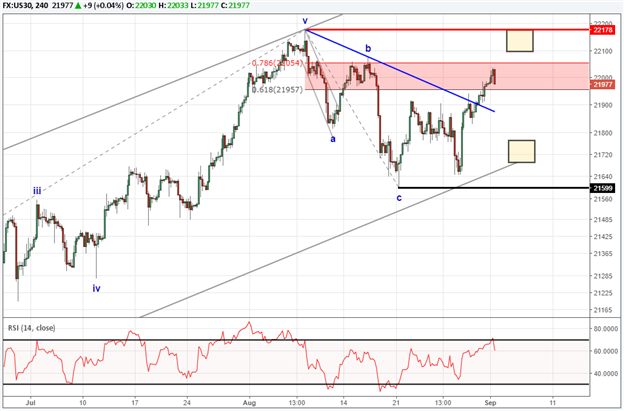