AUD/USD has been trading sideways for the past three weeks. Previously, we wrote how a longer term top could be in place for the pair. Today, we will zoom into a smaller time-frame chart to see if a bearish trend is unfolding.

Looking at a 2 hour chart, the Elliott Wave model we are following is suggesting lower prices so long as AUD/USD remains below .8066. We can count the downtrend beginning with a leading diagonal pattern followed by an a-b-c correction higher. I’m showing the correction higher began on August 10 and is taking the shape of an expanded flat correction. It appears the upward correction is over, but we will give it room to breathe and use the July 26 high of .8066 as the key level for the analysis.

Flat patterns are sideways patterns designed to eat up more time than price. Flat patterns are characteristic of a market with little power to dig a deep retracement. Therefore, if price begins to press the lower bounds of the recent price action near 78 cents, then that will build the case the current Elliott Wave counting is on course.

If prices are successful in breaking lower, then we will anticipate another 200+ pip sell off which could drive AUDUSD down .7750 or even lower levels.

IG Client Sentiment is running at -1.61 that is similar to the readings we saw last week. If this sentiment reading increases, then it would be symptomatic of a bearish turn in price that would line up with the Elliott Wave model. See how live traders are positioned in AUDUSD here.

Webinar recording on diagonal patterns, how to read and trade them.

Webinar recording on Flat patterns, how to read and trade them. 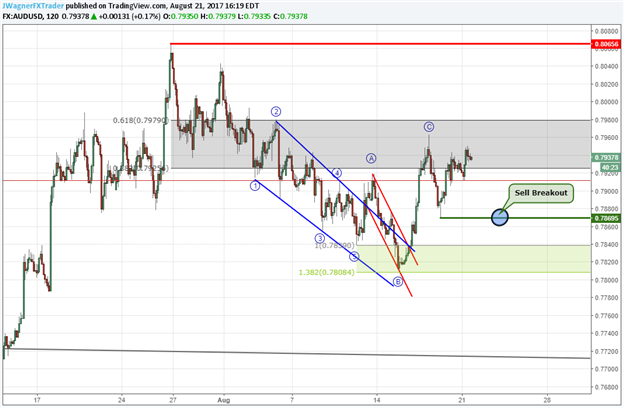 Can USDCHF rally while US and Korean tensions are high?

AUDUSD Elliott Wave Forecasts a Bounce Towards 76 to 78 Cents 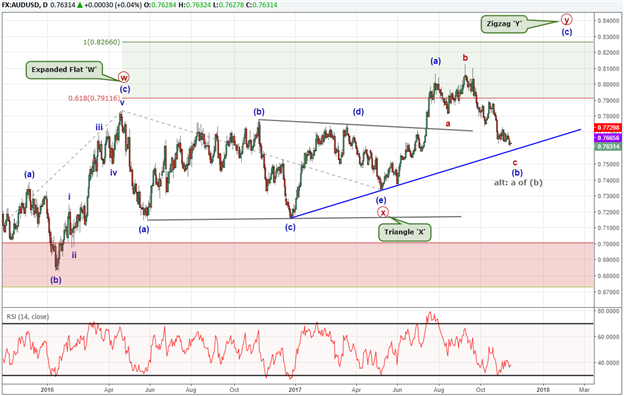 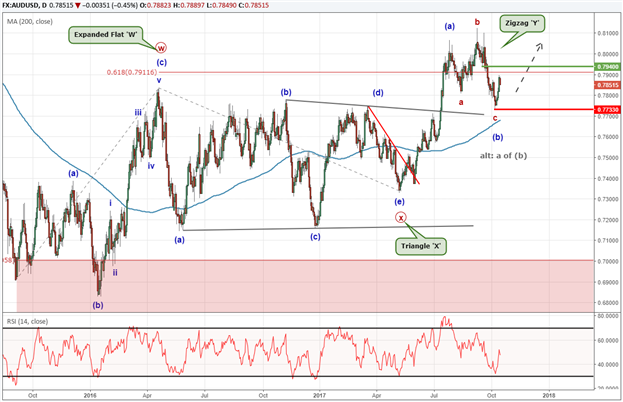