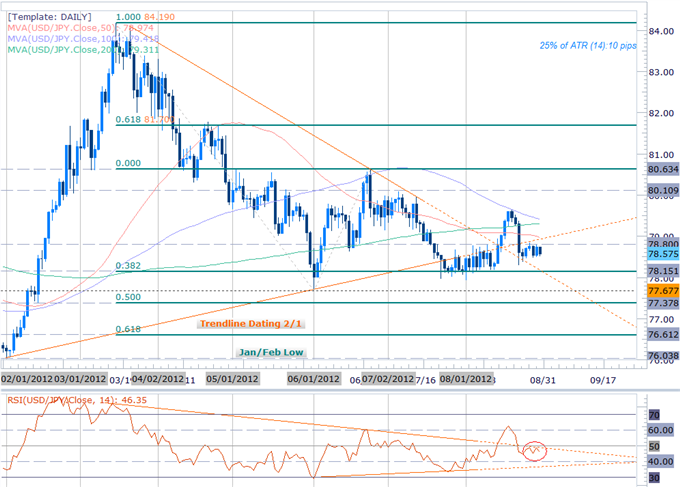 The Japanese yen is the strongest performer against the dollar with the USDJPY off by 0.18% on the session despite broader dollar strength. Risk-off flows are in full force ahead of tomorrow’s highly anticipated Jackson Hole Economic Policy Symposium where Federal Reserve Chairman Ben Bernanke is expected to touch upon the outlook for monetary policy. Consequently, haven flows have propped up the yen as positive real interest rates in Japan continue to increase the yen’s appeal as a store of wealth in times of uncertainty.

The low yielder is higher against all its major counterparts at noon in New York with the USDJPY holding below daily resistance at 78.80. We maintain a neutral bias on the pair heading into tomorrow’s major event risk while noting that a persistent risk-off environment may continue to limit topside advances in the near-term. Daily support rests with the 38.2% Fibonacci extension taken from the March and June highs at 78.15 with a break below the monthly low at 77.93 exposing subsequent floors at the 50% extension at 77.38 and the key 61.8% extension at 76.61. A break back above the 50-day moving average at the 79-handle eyes topside resistance targets at 200-day moving average at 79.30. Note that from a technical standpoint, the USDJPY does remain at risk for further declines with only a breach above the monthly highs invalidating that interpretation. 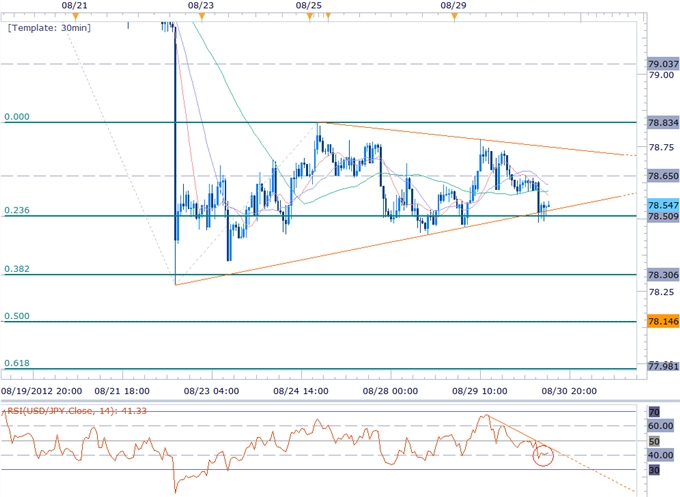 The hourly scalp chart shows the USDJPY continuing to consolidate into the apex of a wedge formation with interim support seen at the 23.6% Fibonacci extension taken from the August 18th an 26th crests at 78.50, 78.30, and the 50% extension at 78.15 (note the confluence with the 38.2% ext seen on the daily chart). Soft resistance is seen at 78.65 with a breach above trendline resistance eyeing topside targets at 78.83, the 79-handle and 79.20. 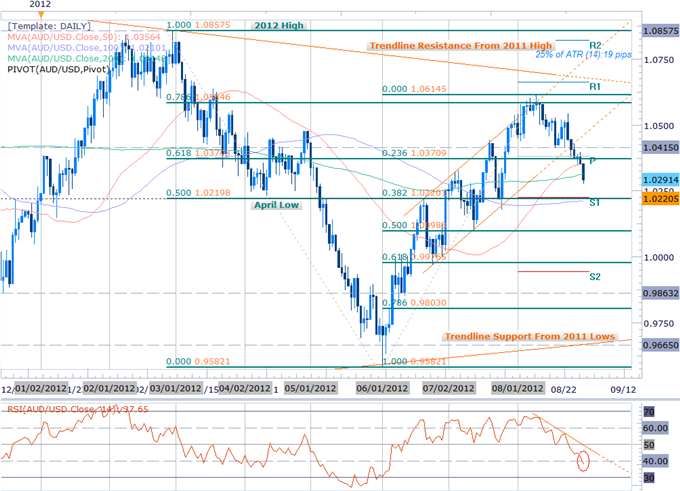 The Australian dollar is the weakest performer against the greenback with a decline of 0.62% on the session after moving more than 106% of its daily average true range. We have maintained our bearish bias on the AUDUSD since the start of the month with the break below our initial monthly objective at 1.0370 now eyeing our secondary objective at the 1.0220. This level is paramount for the aussie as it represents a three-way confluence of the 50% retracement taken form the late-February decline, the 38.2% retracement taken from the June ascent and the S1 monthly pivot. Today’s break below the 200-day moving average offers further conviction on our directional bias with an RSI close below the 40-level (first time since early June) suggesting that near-term momentum remains weighted to the downside. We maintain our bearish outlook on the aussie with only a breach above 1.0415 invalidating this particular setup. 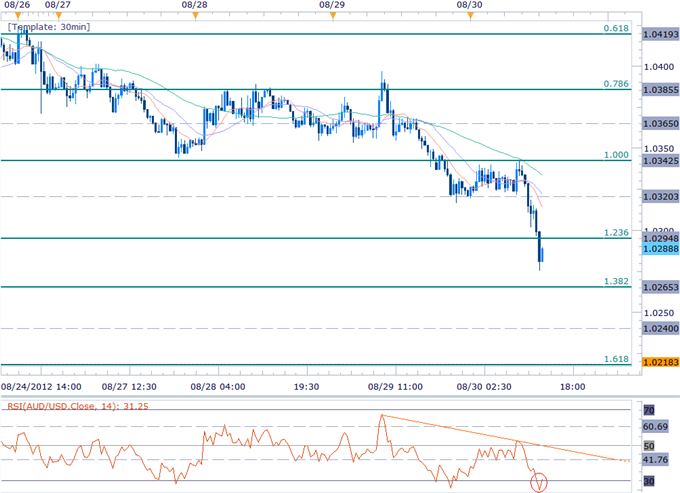 The 30min scalp chart shows the AUDUSD breaking below the 1.0320 support level before losing stream just ahead of the 138.2% Fibonacci extension taken from the August 9th and 22nd crests at 1.0265. A break below this mark eyes subsequent support targets at 1.0240 and the 161.8% extension at 1.0218 (note confluence with key support on the daily chart at 1.0220). Interim resistance stands at 1.0295 backed by 1.0320 and the 100% extension at 1.0342. Traders are advised to remain nimble and use caution ahead of Bernanke’s speech tomorrow with any remarks about further Fed easing likely to weigh on the dollar, putting topside pressure on the AUDUSD pair.

Join Michael on Tuesday morning for a Live Scalping Webinar on DailyFX at 1230 GMT (8:30ET)