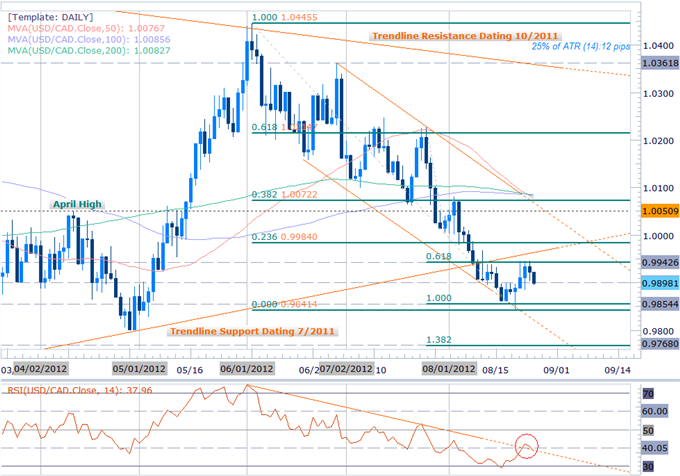 The Canadian dollar is the top performer against the greenback ahead of the European close with an advance of 0.27% despite broader strength in the dollar across the commodity bloc. The USDCAD has continued to push off key resistance tested on Friday at the 61.8% Fibonacci extension taken from the July 25th and August 2nd crests at 9943 with the pair now probing below the 99-handle. Daily support remains with the 100% extension at 9855 and is backed closely buy the August lows at 9841. We remain cautiously bearish the USDCAD below the 9943 threshold with only a breach above the 23.6% retracement taken from the June decline invalidating our directional bias. Note that daily RSI now looks to break back below former trendline resistance with such a scenario offering further conviction on our near-term outlook. 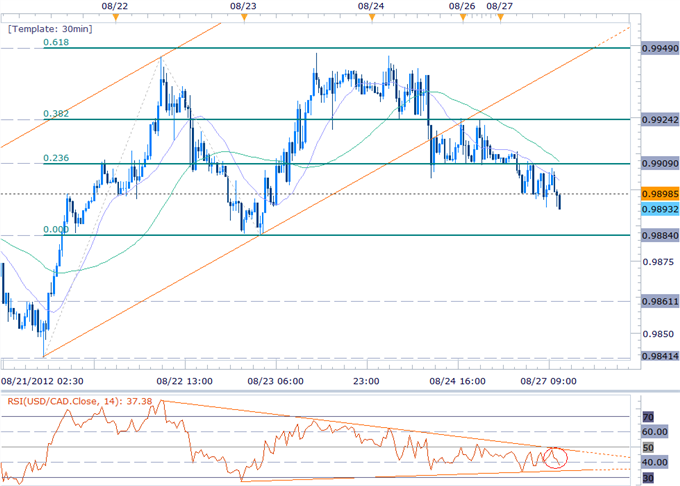 The 30min scalp charts show the USDCAD breaking below short-term channel support before compromising the 23.6% Fibonacci extension taken from the August 21st and 23rd troughs at 9909 in overnight trade. Interim support now rests with at 9884 with a break below this mark invalidating this particular scalp setup. Such a scenario eyes subsequent support targets at 9860, last week’s low at 9841 and 9820. A breach back above the 9909 mark eyes ceilings at the 38.2% extension at 9925, the 61.8% extension at 9950 and 9965. Note that with a daily average true range of just 48 pips, scalps in loonie are not recommended at this time until we see a break-out of the 9850-9940 range with a triangle formation in RSI likely to offer a clear trigger break. 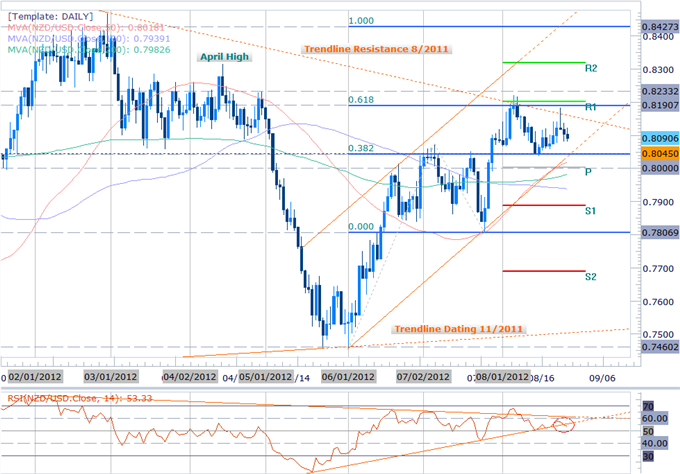 The New Zealand dollar is the weakest performer against the greenback with a decline of 0.22% on the session after moving nearly 85% of its daily average true range. The NZDUSD has continued to hold below long-standing trendline resistance dating back to the 2011 highs with our bias remaining weighted to the downside so long as the exchange rate continues to respect the 61.8% extension taken from the June and July lows at 8190. Critical support rests with at the confluence of the 38.2% extension and channel support at 8045 with a break below this mark exposing subsequent support targets at the monthly pivot at the 80-figure, the 100-day moving average at 7940 and the S1 monthly pivot at 7885. A breach above the R1 monthly pivot at the 82-handle invalidates our bias with a break above 8230 putting a bullish tone on the pair. Note that daily RSI is now probing below trendline support dating back to the May lows with a break close below this mark offering further conviction on our directional bias. 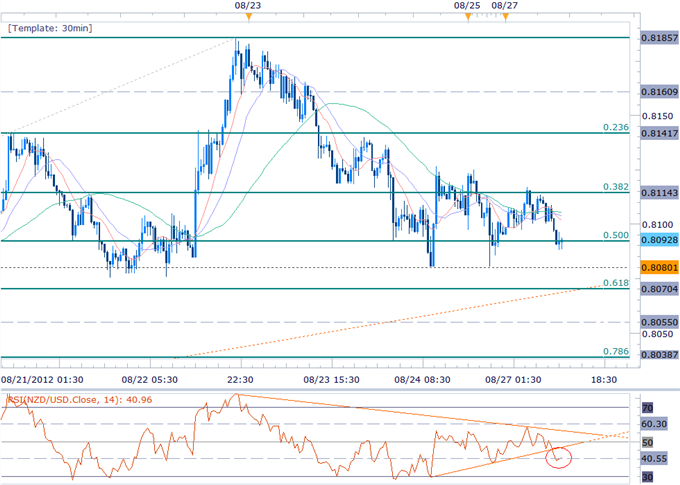 The 30min scalp chart shows the NZDUSD struggling to break below the 50% Fibonacci extension taken from the August 8th and 22nd crests at 8092 with a move below this level eyeing subsequent support targets at the 61.8% extension at 8070, 8055, and the 78.65 extension at 8039. Interim resistance stands with the 38.2% extension at 8115 backed by soft resistance at 8060 and the August 22nd high at 8186. Note that the 30min RSI has now broken below short-term trendline support with price action holding above the 8080 low, suggesting that the pair is likely to remain range bound in intra-day trade for the time being before resumption of the downtrend.