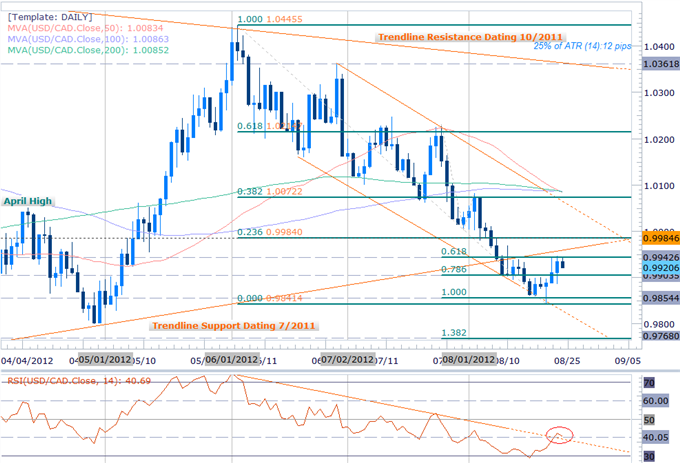 The Canadian dollar is the top performer against the greenback ahead of the European close with an advance of 0.06% despite broader strength in the dollar. The USDCAD was unable to clear the 61.8% Fibonacci extension taken from the July 25th and August 2nd crests at 9943 with the pair reversing off this mark in early US trade. Daily support now rests with the 78.6% extension at the figure and is backed by the 100% extension at 9855. The pair has continued to trade within the confines of a descending channel formation dating back to the late-June highs with a breach above interim resistance targeting the 23.6% Fibonacci retracement taken from the June decline at 9984. Note that daily RSI has now broken above trendline resistance dating back to the June highs with a rebound off that same trendline suggesting that a topside correction may already be underway. As such we remain neutral on the pair as we head into the weekend while noting that only a breach above 9984 would alleviate further downside pressure in the near-term. 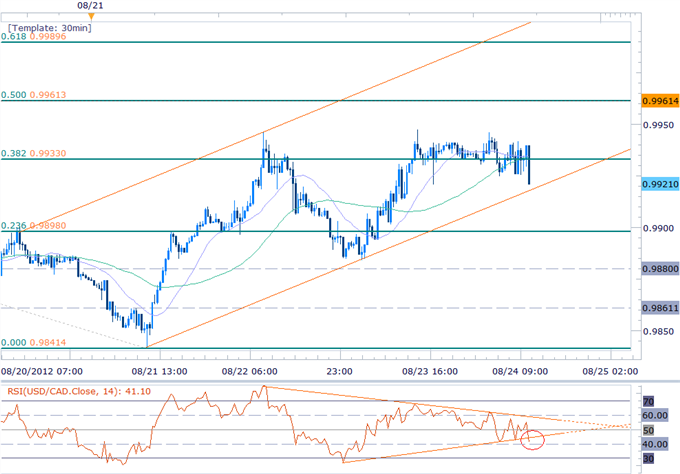 The 30min scalp charts show the USDCAD trading within the confines of a short-term ascending channel formation with the pair now looking to test channel support around 9920. Look for the break of channel support to be accompanied by a break below trendline support in RSI with such a scenario eyeing subsequent intra-day support targets at the 23.6% retracement taken from the August 2nd decline at the 99-handle, 9880, 9860, and the monthly low at 9841. Interim resistance stands at 9960 backed by the 61.8% retracement at 9990. 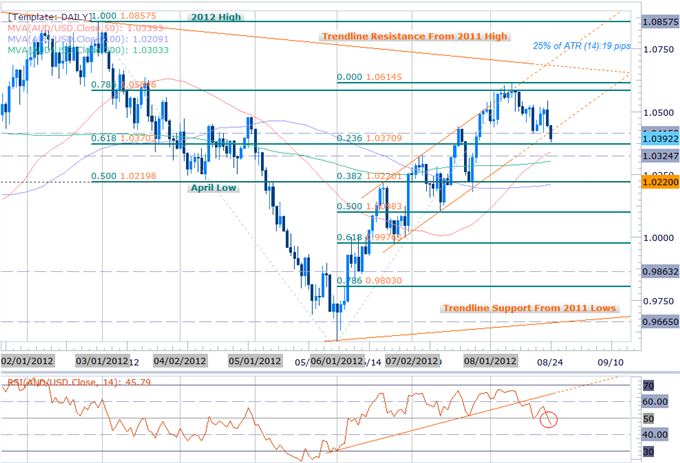 The Australian dollar is the weakest performer for a second consecutive session with a decline of 0.53% after moving 85% of its daily average true range. The aussie came within just seven pips of our monthly objective at the 23.6% Fibonacci retracement taken from the June ascent at 1.0370 before reversing course just ahead of the European close. We maintain our bearish bias on the AUDUSD so long as price action continues to respect the 78.6% retracement taken from the late-February decline at 1.0585, with only a breach above the monthly high at 1.0615 putting a bullish tone on the pair. Note that RSI has now broke below the 50-mark for the first time since June offering further conviction on our medium-term bearish bias. A break below interim support eyes subsequent targets at the 200-day moving average at the 1.03-handle and the 38.2% retracement at 10220. 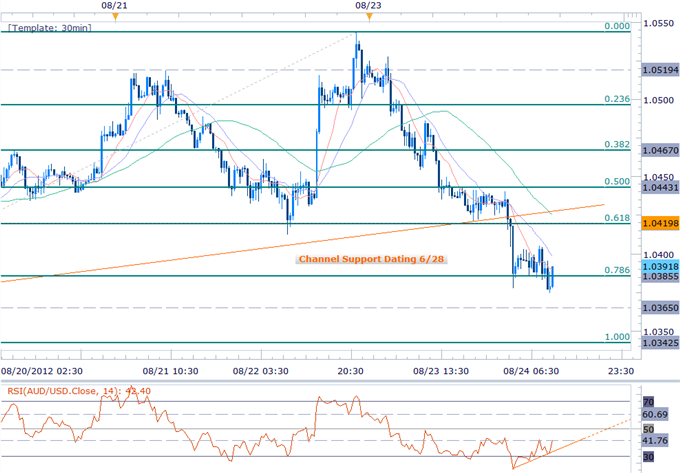 Join Michael on Monday morning for a Live Scalping Webinar on DailyFX at 1230 GMT (8:30ET)