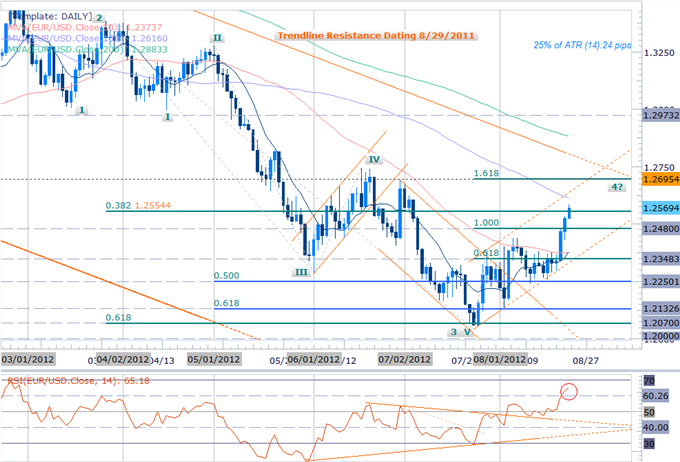 The euro is the strongest performer against a weaker greenback in late North American trade with an advance of 0.40% on the session as the greenback remains under pressure in the aftermath of yesterday’s FOMC minutes. The single currency has now mounted our secondary monthly target at the 38.2% Fibonacci retracement taken from the late-March decline at 1.2550. The EURUSD has continued to respect seasonality trends with precision with the monthly and weekly opening ranges offering clear conviction moves as pair remains within the confines of an ascending channel formation dating back to the July lows. We will hold a neutral stance here heading into the weekend noting key topside daily resistance at the near confluence of channel resistance and the 100-day moving average at 1.2615. Daily support rests with former resistance at the 100% Fibonacci extension taken from the July and August lows at 1.2480 and August 8th swing highs at 1.2440. Note that RSI is now at its highest level since February with a confirmed multi-day close above the 60-mark suggesting the pair remains in a relatively healthy up-trend in the near-term. Bottom line- continue to look higher so long as the 1.24-handle is respected. 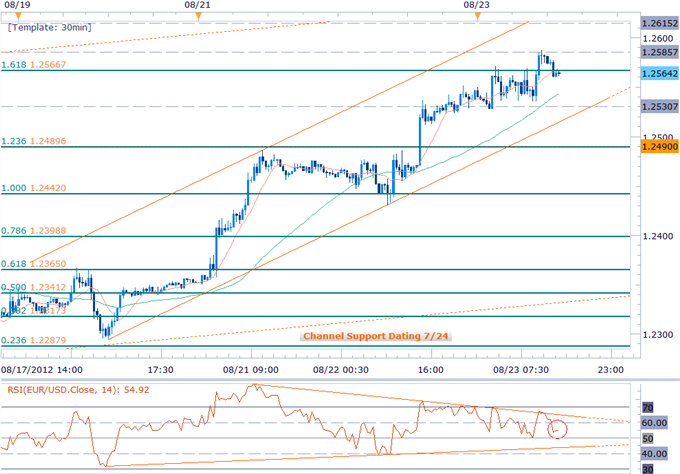 The 30min scalp charts show the EURUSD trading within the confines of a tight ascending channel formation dating back to the 20th with the pair struggling to maintain its position above the 161.8% Fibonacci level taken from the retracement off the August 5th decline at 1.2566. Note that RSI has continued to narrow into the apex of a triangle formation with a pending break-out likely to offer further conviction on an intra-day bias. Soft support now rests at 1.2530 backed by the 123.6% Fib at 1.2490 and the August 5th high at 1.2440. A breach above today’s highs eyes subsequent topside resistance targets at 1.2615 (100-day moving average) and 1.2645. 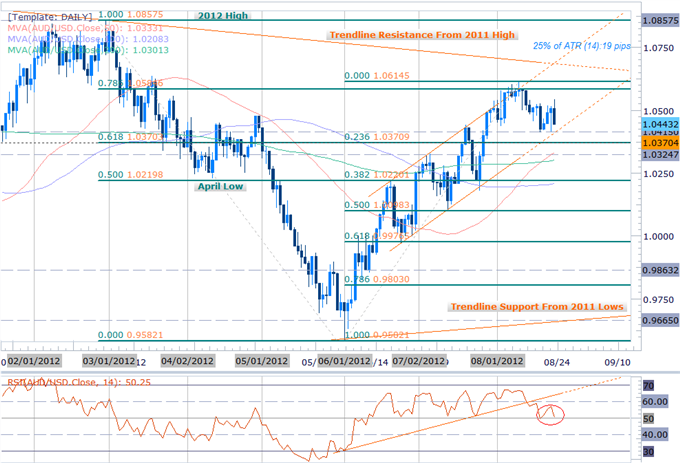 The Australian dollar is the weakest performer with a decline of 0.43% after moving more than 114% of its daily average true range. We maintain our bearish bias on the AUDUSD so long as price action continues to respect the 78.6% retracement taken from the late-February decline at 1.0585, with only a breach above the monthly high at 1.0615 putting a bullish tone on the pair. Interim support rests at the confluence of the monthly low and channel support at 1.0415 with our initial monthly objective eyed at the 23.6% retracement taken from the June advance at 1.0370. Note that daily RSI is now poised for a break below 50 mark for the first time since June, with such a scenario offering further conviction on our directional bias. 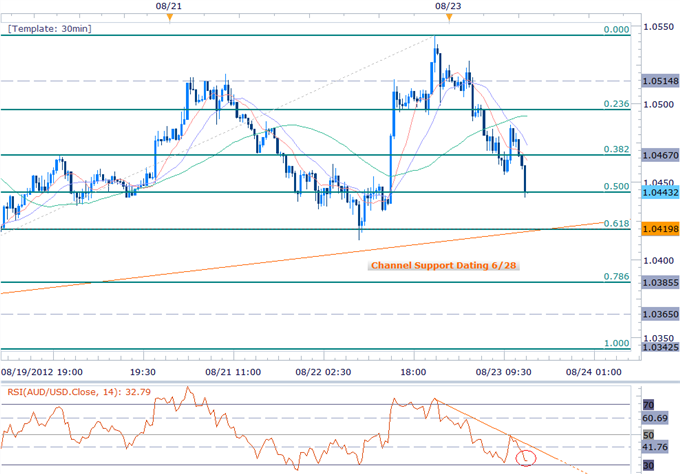