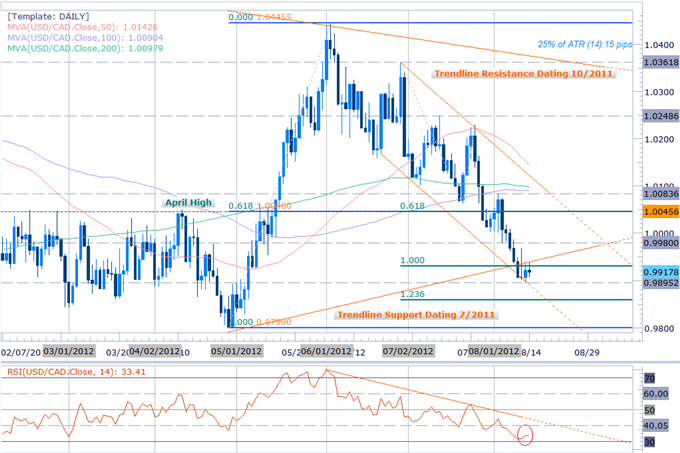 The Canadian dollar is the top performer against the greenback at the close of European trade with a fractional advance of 0.08%, despite broader dollar strength. A stronger-than-expected print on US retail sales ahead of the US open today fueled a rally in the greenback as recent domestic data continues to undermine calls for further Fed stimulus. With the historical ties between these two economies, improved US data also bodes well for Canada with the loonie advancing against all its major counter-parts in late New York trade.

The USDCAD continues to hold just below former long-standing trendline support dating back to the 2011 lows with key support seen holding at yesterday’s lows at 9895 and the 123.6% Fibonacci extension taken from the June 28th and July 25th crests at 9860. Note that daily RSI has now reached its lowest levels since early February with the oscillator now hovering just above the 30-oversold threshold. The relative strength index has not broken this level since March of 2010 (even then- no lower than 27) and suggests that the pair may trade higher in the days to come. A break back above former trendline support eyes initial resistance targets at 9980 backed by parity and the confluence of the 61.8% extension and the 61.8% retracement taken from the late April advance at 1.0045. Note that we remain neutral on the loonie here with a breach above RSI trendline resistance dating back to the June highs offering a trigger for long entries. The 30min scalp charts shows the USDCAD attempting to breach short-term channel resistance dating back to July 24th with the pair holding a range between the 78.6% and the 61.8% Fibonacci extensions taken from the July 24th and August 2nd crests at 9904 and 9940 respectively. A breach above interim resistance eyes topside targets at 9970 and the 38.2% extension just below parity. Note that RSI has remained above the 40-mark suggesting that the descent may lack proper conviction with a breach above trendline resistance offering long triggers. A break below the weekly low risks further dollar losses with such a scenario eyeing subsequent floors at 9880 and the 100% extension at 9855. 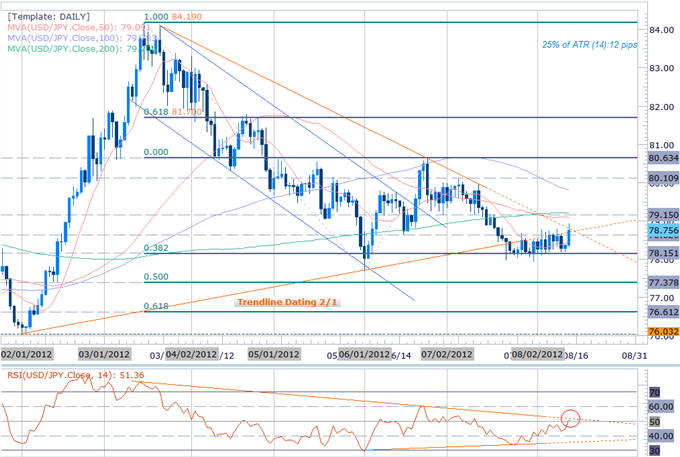 The Japanese yen is the weakest performer against the dollar with a decline of 0.59% on the session. The USDJPY pierced key trendline resistance dating back to the March 21st highs before settling just below around 78.75 with daily RSI holding just below a similarly referenced trendline. The move does not warrant action here in my opinion with the advance lacking proper conviction for a continued rally. A breach above interim resistance at 79.15 (200DMA at 79.20) with and RSI breach above the 60-thredhold offers further conviction on the advance with such a scenario eyeing targets at the July highs (80.10) and the June highs at 80.63. A daily close below the 38.2% Fibonacci extension taken from the March and June highs would put a bearish tone on the pair with subsequent floors seen at 77.40 and the 61.8% extension at 76.60. Bottom-line- until we clear this range, we will maintain our neutral stance on the yen. 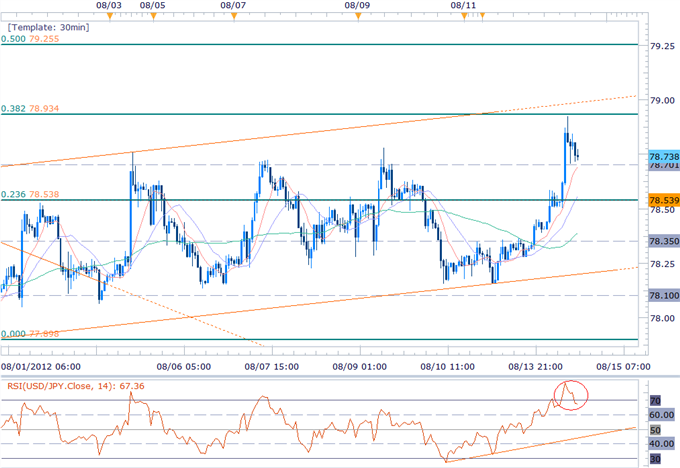