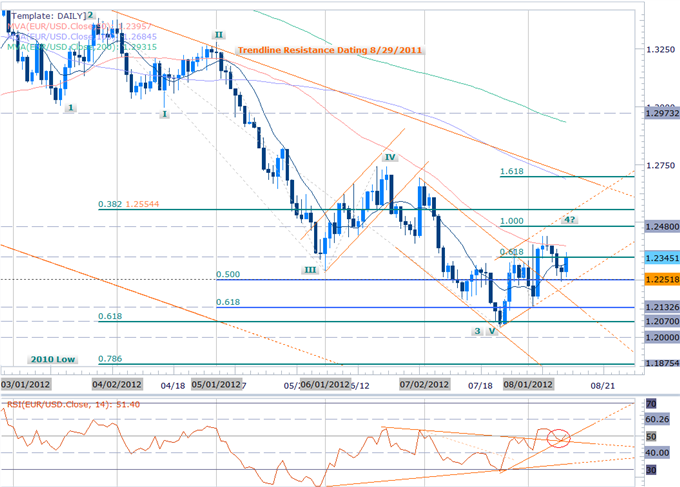 The euro is the strongest performing currency against the US dollar at the close of European trade with an advance of 0.47% on the session. On Friday, the EURUSD rebounded off daily support at the 50% Fibonacci extension taken from the May and June highs at 1.2250 with a rebound in the RSI off former trendline resistance now serving as support, offering further conviction on our near-term bullish bias. The single currency is not pressing resistance at the 61.8% Fibonacci extension taken from the July and August lows at 1.2350 with a breach above this mark eyeing subsequent topside targets at the monthly highs at 1.2440 and the 100% extension at 1.2480. As we noted last week, the euro remain constructive as it continues to trade within an ascending channel formation dating back to the July lows with only a move below 1.2250 invalidating our interim bias while a break below the monthly lows at 1.2132 would put us back on the short side. 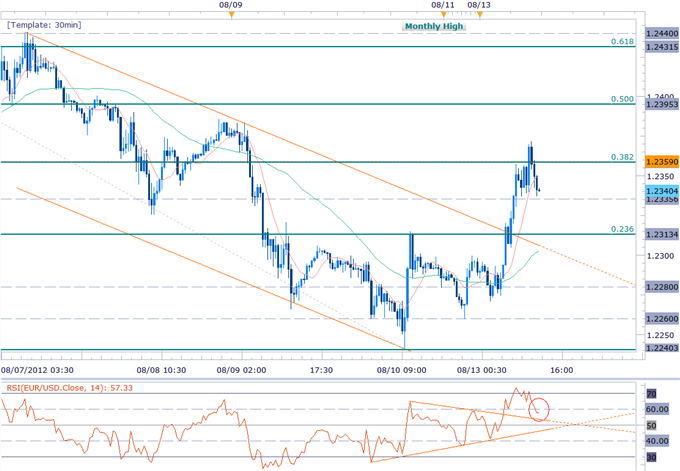 The 30min scalp charts shows the euro breaking above a short-term descending channel formation before losing stream just above the 38.2% Fibonacci extension taken from the August 2nd and 10th lows at 1.2360. The rejection above this mark suggests further advances in intra-day trade may remain limited with interim support targets seen at 1.2335, the 23.6% extension at 1.2313, and 1.2280. Only a break below the last week’s low at 1.2240 would invalidate this setup. A break of the highs eyes subsequent topside resistance targets at 1.2395 and the 61.8% extension at 1.3430. Note that a breach above the monthly high at 1.2440 offers further conviction on intra-day long scalps with such a scenario eyeing our objective at 1.2480 (the 100% extension noted on the daily chart). 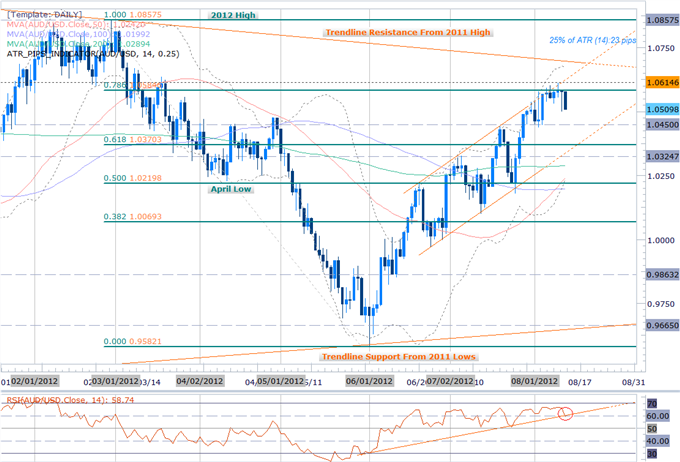 The Australian dollar is the weakest performer against the greenback with a decline of 0.62% on the session. As highlighted in last week’s Scalp Report, the AUDUSD remains poised for correction lower with the exchange rate continuing to respect Critical resistance at the 78.6% Fibonacci retracement taken from the late-February decline at 1.0585. This level remains paramount for the aussie (on a close basis) with a breach above the monthly high at 1.0615 invalidating our near-term bearish bias. Interim daily support rests at last week’s low at 1.0498 backed by 1.0450 and the 61.8% retracement at 1.0370. Note that daily RSI now looks poised for a trigger break below trendline support dating back to the June lows with such a scenario offering further conviction on our directional bias. 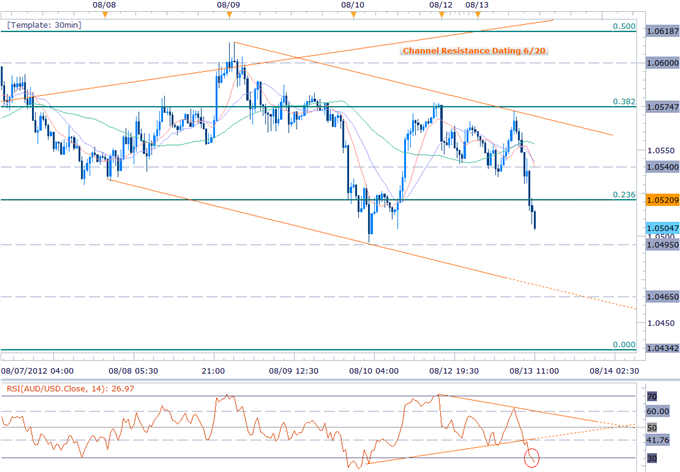