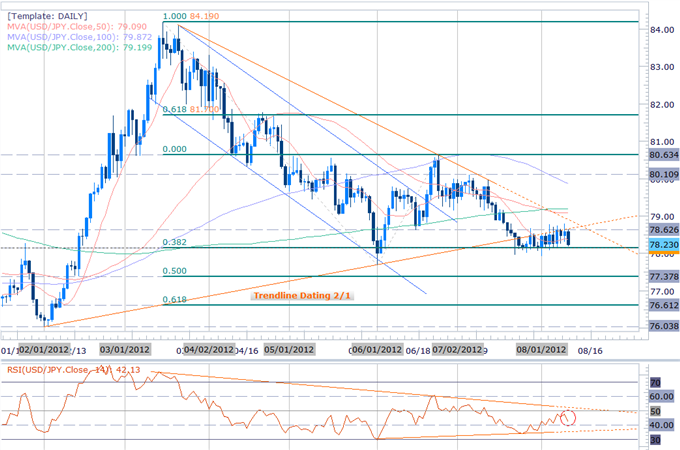 The Japanese yen is the top performer against the greenback in early US trade with an advance of 0.45% despite broader dollar strength. Markets are back on the defensive today as yields on European periphery debt, specifically Spain and Italy, climbed higher in the overnight session, fueling ongoing concerns regarding the deepening crisis that has gripped the region for nearly three years now. Equity markets have pared a large portion of the week’s advance with US stock indices off by 0.4-0.5% at the open of trade in New York.

The yen is stronger against all its major counterparts today as real positive interest rates in Japan continue to increase the appeal of the low yielder as a store of wealth. Risk aversion flows are likely to keep the yen well supported in intra-day trade, putting downward pressure on the USDJPY. The pair has remained in a tight range between the 78-handle and 78.60 with the exchange rate continuing to press former trendline support, now resistance, dating back to the February lows. Key daily support remains with the 38.2% Fibonacci extension taken from the March and June highs at 78.15 with a break below the monthly low at 77.90 exposing subsequent floors at 77.38 and the 61.8% extension at 76.60. A breach and close above trendline resistance dating back to the March highs at 78.80 alleviates further downside pressure in the near-term with such a scenario eyeing topside resistance targets at 79.20 (200-day moving average) and the July high at 80.10. Note that RSI has continued to consolidate into the apex of a wedge formation with a pending break-out likely to offer further conviction on a directional bias. 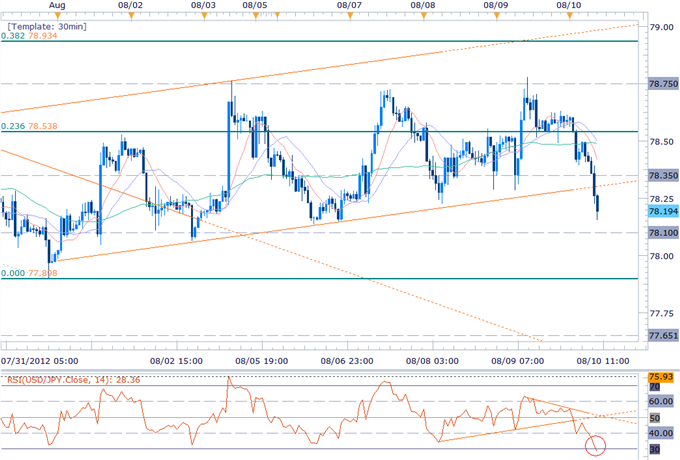 The hourly scalp chart shows the USDJPY breaking below short-term channel support today as haven flows stoked demand of the yen just ahead of the US open. Interim support targets are eyed at 78.10 backed by the monthly low at 78.90 and 77.65. It’s important to note that despite the early risk sell-off it’s unlikely the pair will break the recent range ahead of the weekend with rang-bound strategies still feasible as our broader bias remains neutral. Interim resistance now stands at 78.35, the 23.6% retracement taken from the June 24th decline at 78.54 and 78.75. 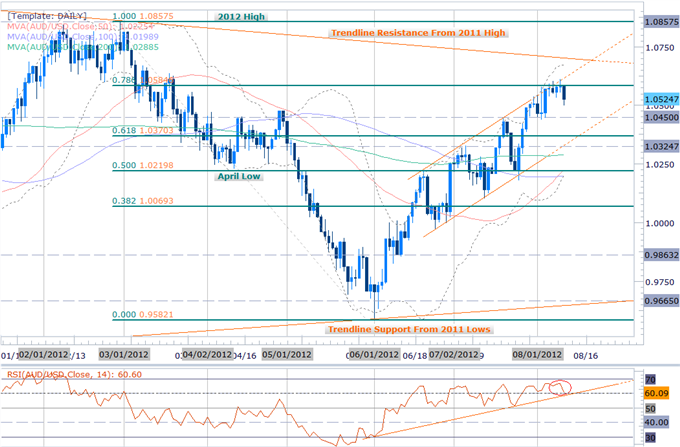 The Australian dollar is the weakest performer with a decline of 0.52% at the open of US trade. As highlighted in this week’s Scalp Report, the AUDUSD remains poised for correction lower with the exchange rate continuing to respect Critical resistance at the 78.6% Fibonacci retracement taken from the late-February decline at 1.0585. This level remains paramount for the aussie (on a close basis) with a breach above the 1.06-handle invalidating our near-term bearish bias. Interim daily support rests at 1.0450 and is backed by the 61.8% retracement at 1.0370. Note that daily RSI looks poised for a trigger break below trendline support dating back to the June lows with such a scenario offering further conviction on our directional bias. 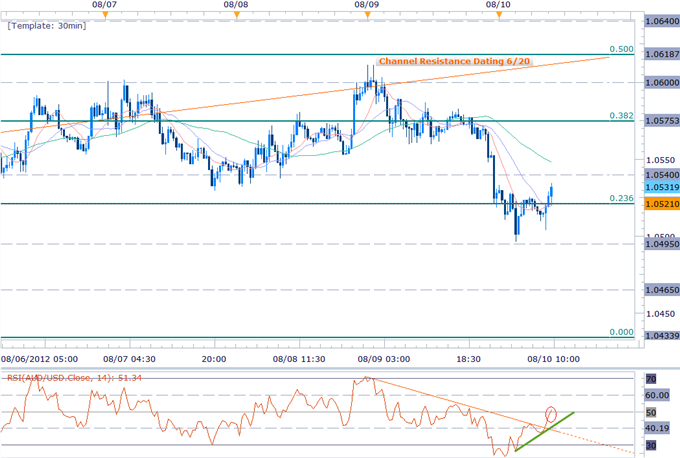 The 30min scalp chart shows the AUDUSD rebounding just pips ahead of our soft support target at 1.0495 before breaking back above the 23.6% Fibonacci extension taken from the July 24th and August 1st troughs at 1.0520. Note that a break above RSI trendline resistance suggests that the pair may yet see a more substantial correction higher before continuing its descent and as such, traders are advised to wait for a trigger break below short-term trendline support (green) before attempting subsequent short-scalps. Interim resistance levels are seen at 1.0540 backed by the 38.2% extension at 1.0575 and the 1.06-handle. A move back below interim support eyes subsequent targets at 1.0495, 1.0165 and the August low at 1.0435.

Join Michael on Monday morning for a Live Scalping Webinar on DailyFX at 1230 GMT (8:30ET)