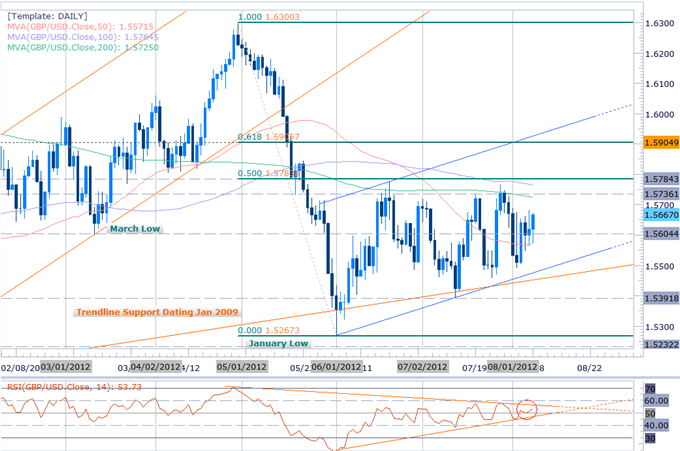 The British pound is the top performer against a weaker greenback at the close of European trade with an advance of 0.31% on the session. Although the Bank of England lowered its forecast for growth and inflation, remarks made by central bank Governor Mervyn King offered some support to the sterling after he cited that further rate cuts would be ‘counter-productive.’ The comments suggest that the Monetary Policy Committee may continue to endorse a wait-and-see approach as European policymakers increase efforts to address the deepening crisis that has gripped the region for nearly three years.

The GBPUSD has remained range-bound since early June with price action continuing to consolidate between the 200-day and 50-day moving averages at 1.5725 and 1.5570 respectively. While the broader bias on the pound remains unclear, a pending break-out in daily RSI is likely to offer further clarity as the oscillator flat-lines into the apex of a wedge formation. Until-then, expect further sideways price action with our short-term bias remaining neutral until such time when a conviction bias can be formulated. 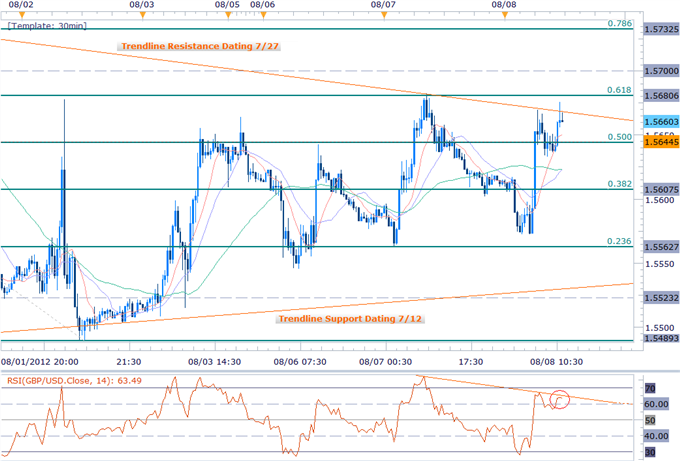 The hourly scalp chart shows the GBPUSD consolidating into the apex of a triangle formation dating back to the July 12th lows with the exchange rate now testing trendline resistance. A topside break eyes immediate resistance at the 61.8% Fibonacci extension taken from the July 25th and August 2nd troughs at 1.5680 backed by the 1.57-handle and the 78.6% extension at 1.5732. Interim support rests with the 50% extension at 1.5645 with subsequent floors seen at the 38.2% extension at 1.5607 and 1.5563. While our broader bias remains neutral here, intra-day scalps are still feasible with proper conviction RSI triggers. 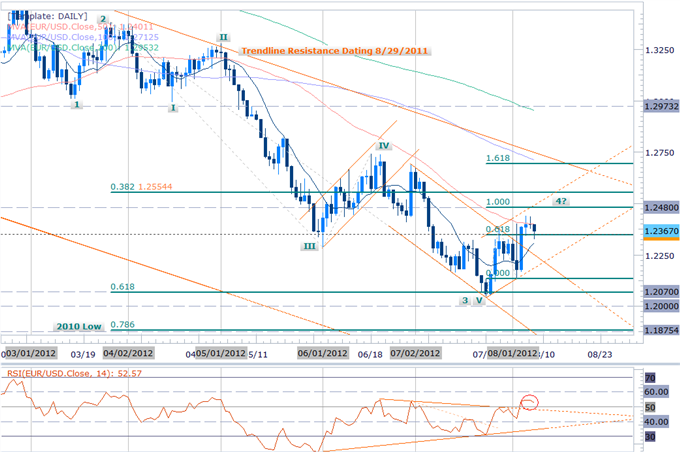 The euro is the weakest performer against the greenback with a decline of 0.25% on the session. The single currency is lower against all its major counterparts today amid reports that the ECB will hold off on the purchase of sovereign debt until the German Constitutional Court rules on the ESM (European Stability Mechanism) scheduled for September 12th. At the same time, rating agency Standard and Poor’s moved to lower Greece’s credit rating outlook to negative from stable, further exacerbating the euro sell-off. Still the pullback remains within the threshold to maintain our short-term bullish bias with topside daily resistance seen at the 100% Fibonacci extension taken from the July 24th and August 2nd troughs at 1.2480 backed by the 38.2% retracement taken from the late-March decline at 1.2550. Daily support remains with the 61.8% extension at 1.2350 backed by former channel resistance, now support, currently around 1.2250. Note that the daily RSI breach above trendline resistance now looks for a rebound off that same trendline to solidify the break and offer further conviction on our directional bias. 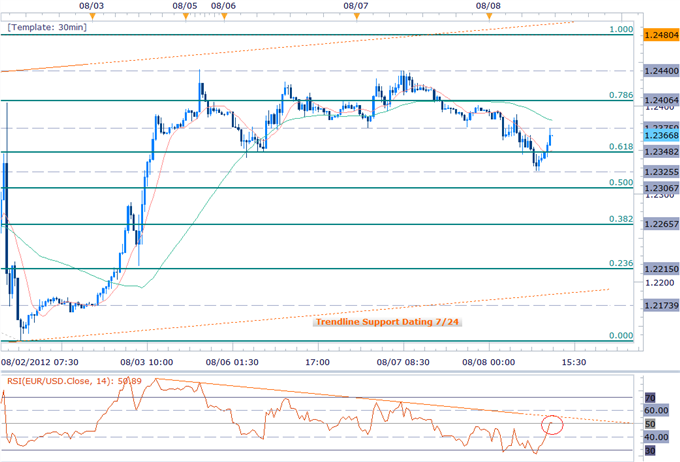