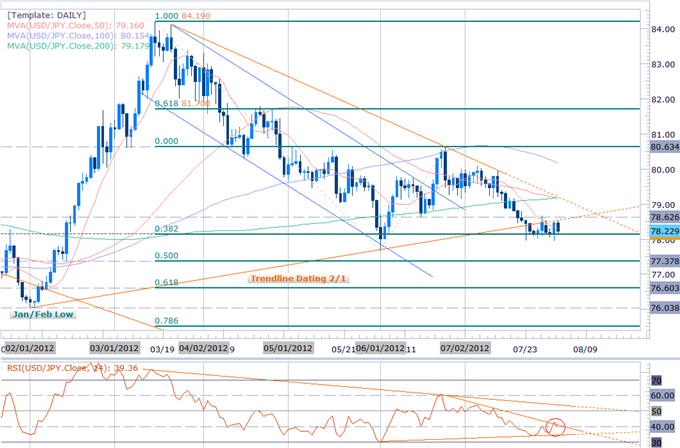 The Japanese yen is the strongest performer against the dollar at the close of European trade with an advance of 0.31% on the session. Markets are trading heavy today after the ECB failed to delivery further easing with President Mario Draghi spending much of the session back peddling remarks made last week where he pledged to do “whatever” was necessary to defend the euro. Investor expectations for today’s interest rate decision were immense with broader risk assets plummeting in the wake of Draghi’s press conference. By the close of trade in Europe, equity markets were off by 0.90-2.7% with Spain’s IBEX 35 off by a staggering 5.16% on the session. Risk aversion has continued to support the yen as positive real interest rates in Japan increase the yen’s appeal as a store of wealth in times of crisis.

The USDJPY continues to hold above critical daily support at the 38.2% Fibonacci extension taken from the March and June highs at 78.15 with the pair remaining within a tight range below daily resistance at 78.62 (June 15th swing low). We remain neutral on the yen ahead of tomorrow’s NFP print with a breach above interim resistance eyeing topside targets at the 4-way confluence of the June 29th swing low, channel resistance and the 50 & 200-day moving averages at 79.15. A move above this key level offers conviction on a bullish bias with such a scenario eyeing the 80-handle, and the June high at 80.63. A break below immediate support at 78.15 sees subsequent floors at the 50% extension at 77.38 and the key 61.8% extension at 76.60. 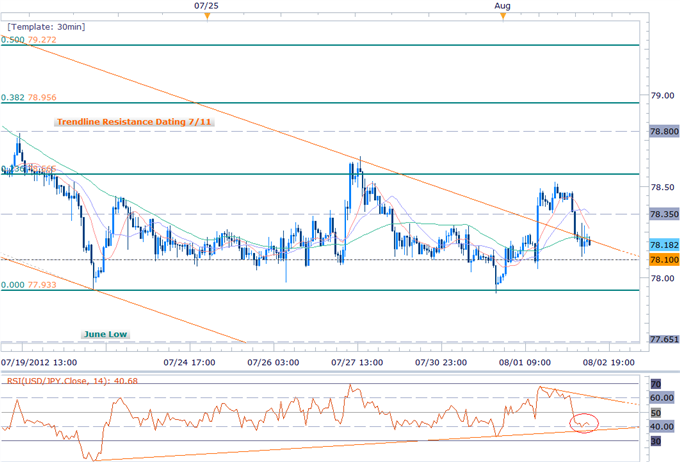 The hourly scalp chart shows the USDJPY continuing to hold between the July low at 77.93 and the 23.6% retracement taken from the June 24th decline at 78.55. Soft interim support is eyed at 78.10, 77.90 and the June low at 77.65. A breach above interim resistance at 78.35 targets the 78.55, 78.80, and the 38.2% retracement at 78.95. Note that with a daily average range (ATR) now just coming off lows not seen since January, scalps in the USDJPY are not recommended but rather should be used as reference for longer-horizon trade setups. 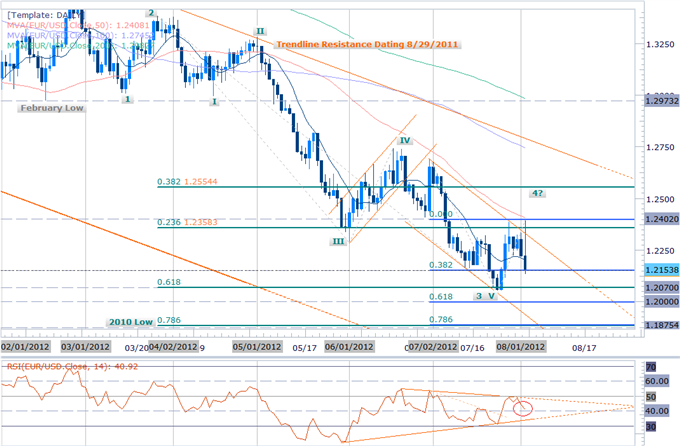 The euro is the weakest performer against the greenback with a decline of 0.61% on the session. The single currency is lower against all its major counterparts today in the aftermath of the ECB’s rate decision with the EURUSD now testing interim daily support at the 38.2% extension taken from the June 29th and today’s highs at 1.2150. Today’s range is the largest since November 9th as Draghi’s remarks fueled massive spikes amid thin market conditions ahead of key employment data from the US tomorrow. The EURUSD has continued to trade within the confines of a descending channel formation dating back to the June 29th high with our broader outlook remaining heavily weighted to the downside. That said, as we have noted multiple times this week, a correction higher before breaking the lows remains within the realm of possibilities after making a clean 5-wave decline from the June highs with a breach above the today’s highs looking to satisfy a 3-wave correction to 1.25 and the 38.2% retracement taken form the late March decline at 1.2550. A break below 1.2160 targets the broader 61.8% extension taken from the March and June highs at 1.2070 backed by the 1.20-handle, and the confluence of the 78.6% extensions at 1.1880. (Note that the 2010 low rests just lower at 1875). 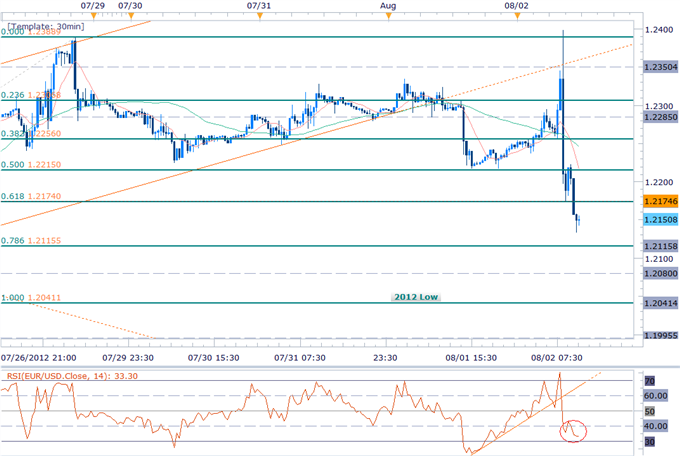