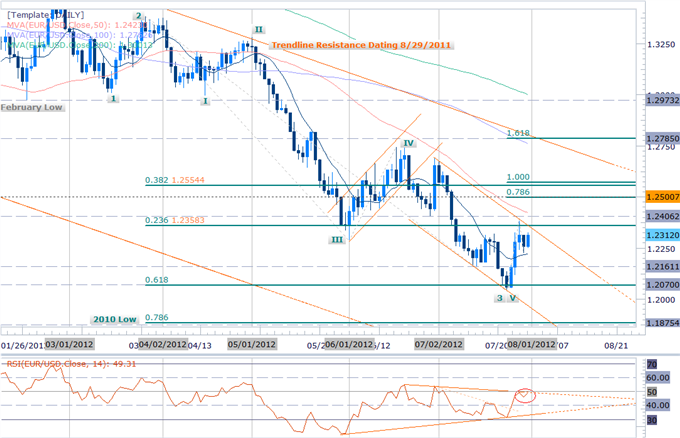 The euro is the strongest performing currency ahead of the US close with an advance of 0.42% on the session. The EURUSD has continued to trade within the confines of a descending channel formation dating back to the June 29th high with the pair holding a tight range today above the Sunday open low at 1.2225. As I noted in yesterday’s Winners/Losers report, the EURUSD has now made a “clean 5-wave decline from the June highs before encountering key Fibonacci support at the 61.8% extension taken form the March and June highs at 1.2070. The decline satisfies the 5th wave of a larger 5-wave decline off the February highs. Look for the pair to correct higher with a breach above the 23.6% retracement taken from the March to July decline at 1.2358 eyeing topside targets at the 1.24-handle, backed by the 38.2% retracement at 1.2550.” Note that this level lies close to the 100% extension taken from the July 24th and 30th lows with an RSI break above trendline resistance offering a trigger for long entries on the euro. Initial daily support now rests at 1.2250, 1.2161 (7/16 swing low), 1.2070 and the 1.20-figure.Note that the ECB rate decision is on tap for Thursday, with investor focus fixated on further central bank easing amid ongoing concerns regarding stability and sustainability of the euro area. 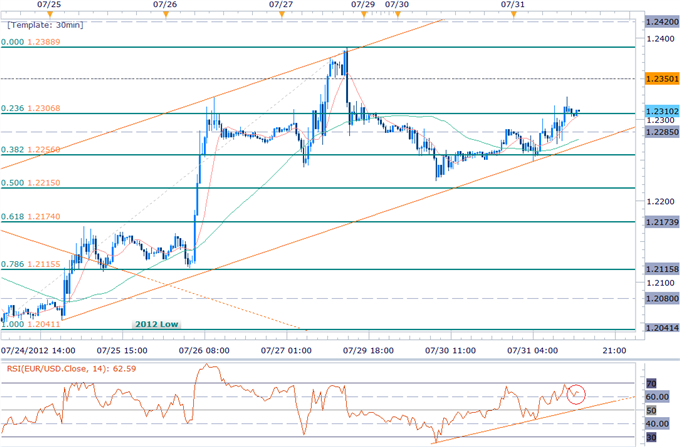 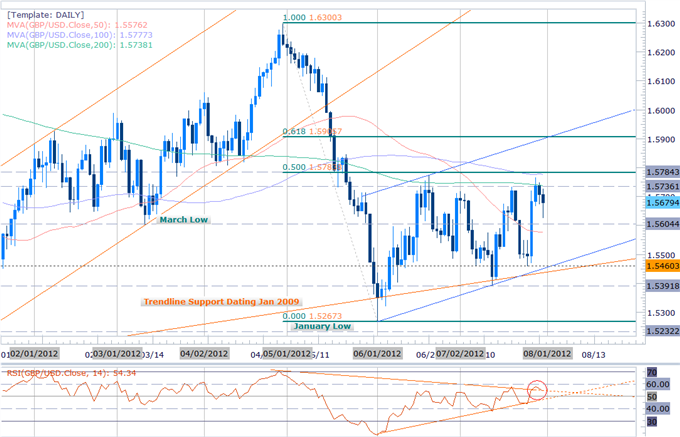 The British pound is the weakest performer on the session with a decline of 0.18% against the reserve currency after Moody’s Investor Services lowered its outlook for the UK economy. The rating agency cited that, “Should the U.K.’s growth potential weaken significantly, then this would create a significant challenge to the government’s debt-reduction efforts and would place downward pressure on the country’s rating.” Moody’s has the UK’s Aaa rating on “negative” outlook noting that the projection, “in part reflects concerns about the U.K.’s macroeconomic outlook for the next few years.”

Although the GBPUSD has move well off the lows in the New York session, the pair remains at risk ahead of the BoE interest rate decision on Thursday with the central bank widely expected to hold the benchmark interest rate at 0.50%. Interim daily resistance stands with the 200-day moving average at 1.5738 backed closely by the confluence of the 100-day moving average and the 50% retracement taken from the late April decline at 1.5780. Daily support rests at the former March lows 1.5604 backed by the 50-day moving average at 1.5575 and trendline support dating back to the June lows, currently around the 1.5460-mark. 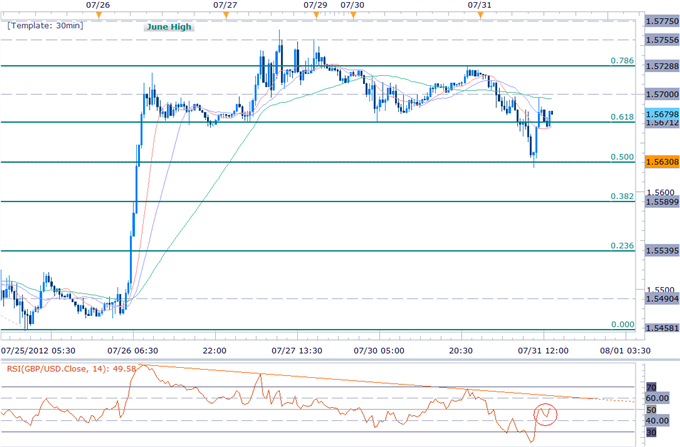 A look at the 30min scalp chart shows the GBPUSD trading just above the 61.8% Fibonacci extension taken from the July 12th and 25th troughs at 1.5670. A break back below this level eyes subsequent intra-day support targets at 1.5630, the 38.2% extension at 1.5590, and 1.5540. Interim resistance stands at the 1.57-figure, backed by 1.5730, 1.5755 and the June highs at 1.5775. Our broader outlook on the pound remains neutral at these levels and head of the BoE with opening ranges likely to offer further conviction on intra-day scalp biases.