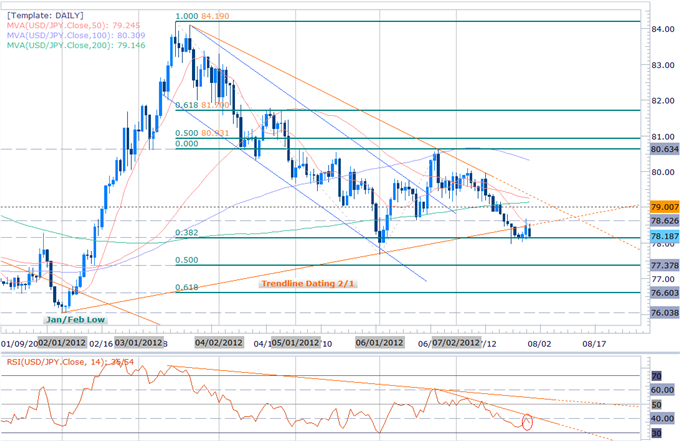 The Japanese yen is the strongest performer against a firmer dollar at the close of European trade with the USDJPY off by 0.35% on the session. US equity markets are under some pressure in early trade after the Dallas Fed manufacturing activity index grossly missed expectations with a print of -13.2, its worst reading since September 2011. The data comes on the heels of a dismal print on the Richmond Fed manufacturing index earlier in the month which posted its weakest read since April 2009, suggesting a substantial decline in domestic broader manufacturing activity. The yen has remained well supported early in the week with the low yielder advancing against all its major counterparts in US trade.

The daily charts shows the USDJPY holding above key daily support at the 38.2% Fibonacci extension taken from the March and June highs at 78.15. As we noted last week, “The three wave rally off the June 1st lows seems to be corrective in nature, suggesting that the broader trend on the pair remains weighted to the downside.” That said a break below 78.15 eyes daily support at the 77.40 backed by the key 61.78% extension at 76.60. A breach above 78.63 looks for a tag of the 200-day moving average at 79.15 backed closely by trendline resistance dating back to March 21st. Note that daily RSI remains below trendline resistance dating back to the June highs with a breach above this mark likely to alleviate further downside pressure in the near-term. 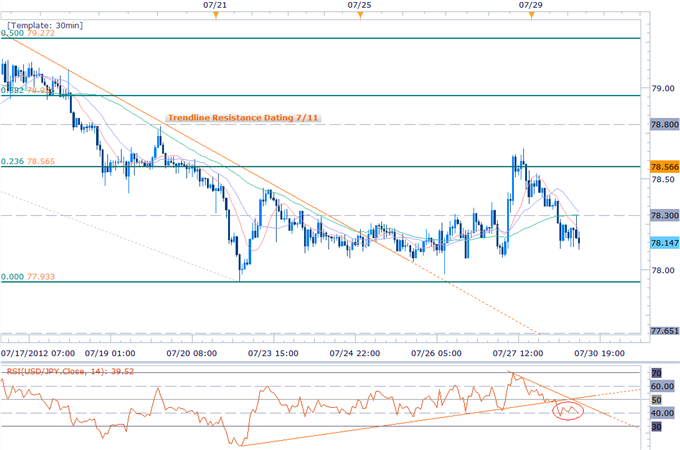 The hourly scalp charts shows the pair breaking back below soft support (now resistance) at 78.30 with subsequent support targets seen at the July lows made last week just below the 78-handle, 77.65, and 77.35. A breach back above interim resistance eyes the 23.6% retracement taken from the June 24th decline at 78.55 backed by 78.80 and the 38.2% retracement at 78.95. Note that with a daily average range (ATR) now just coming off lows not seen since January, scalps in the USDJPY are not recommended but rather should be used as reference for longer-horizon trade setups. 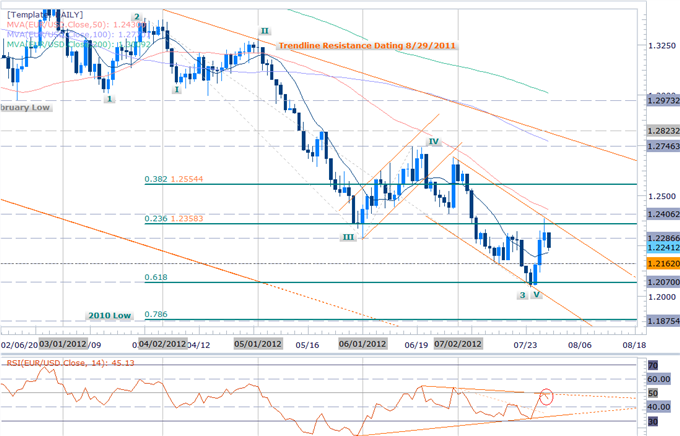 The euro is the weakest performer at noon in New York with a loss of 0.63% on the session. The EURUSD has continued to trade within a newly formed descending channel formation dating back to the June 29th high with the price action making a clean 5-wave decline before encountering key Fibonacci support at the 61.8% extension taken form the March and June highs at 1.2070. The decline satisfies the 5th wave of a larger 5-wave decline off the February highs. Look for the pair to correct higher with a breach above the 23.6% retracement taken from the March to July decline at 1.2358 eyeing topside targets at the 1.24-handle, backed by the 38.2% retracement at 1.2550. Initial daily support rests at 1.2161 (7/16 swing low), 1.2070 and the 1.20-figure. Note that the ECB rate decision is on tap for Thursday, with investor focus fixated on further central bank easing amid ongoing concerns regarding stability and sustainability of the euro area. 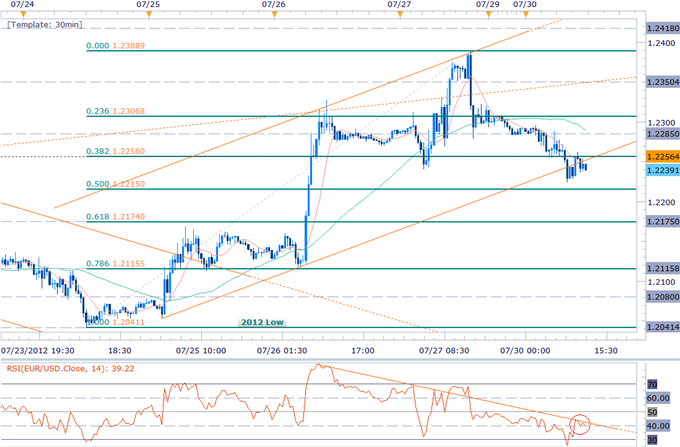