EUR Eyes Interim Top Ahead Of ECB– 1.24 in Focus Heading Into August 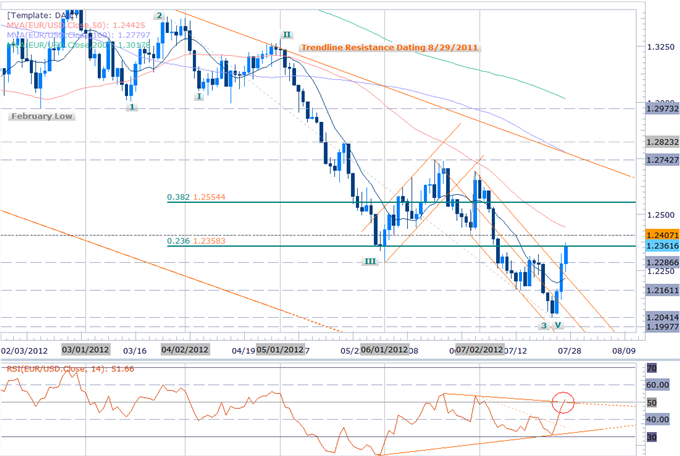 The euro is the strongest performer against a weaker greenback ahead of the European close with an advance of 0.68% on the session. Risk sentiment remains well supported today after stronger than expected US economic data with 2Q GDP coming in at 1.5% vs. consensus estimates of 1.4%, and University of Michigan confidence survey up ticking to 72.3 from 72.0. The single currency has continued to rally on the back of ECB President Mario Draghi’s remarks yesterday with the EURUSD breaching above the upper bound trendline of the descending Andrew’s Pitchfork formation with the pair now testing interim daily resistance at the 23.6% Fibonacci retracement taken from the top of wave 2 (March highs) to the lows made this week at 1.2358. This level is backed closely by the June 28th swing low at 1.2406 and the 50-day moving average at 1.2440. A 5 wave descent off the March highs has now satisfied wave 3 of the larger structural decline with a correction higher likely into the end of the month before resuming lower. Daily support now stands at 1.2285 (June 1st low), 1.2161 (July 13th swing low) and the yearly lows at 1.2041. Although further topside advances are likely in the days to come, our medium-term objective remains the 1.20-handle with only a daily RSI close above the 60-mark threatening our broader bias. Note that the ECB rate decision is on tap next week, with investor focus fixated on further central bank easing amid ongoing concerns regarding stability and sustainability of the euro area. 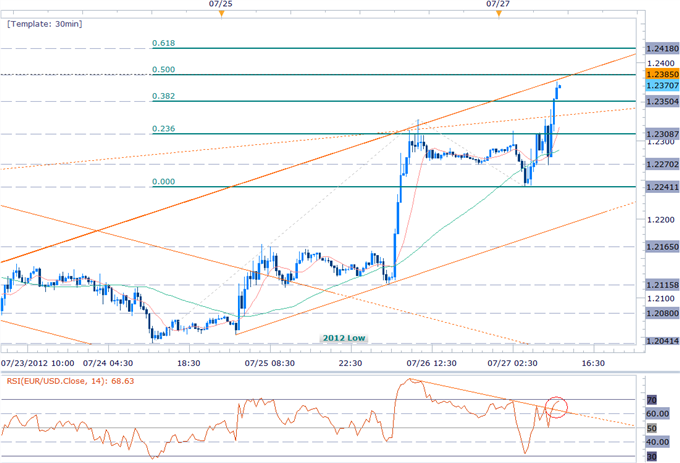 A look at the 30min scalp chart shows the EURUSD trading within the confines of a newly formed ascending channel formation with the pair now completing a 5-wave advance off the lows. Interim topside resistance is now seen at the 50% Fibonacci extension taken from the July 24th and overnight lows, at 1.2385. Look for a pullback after this late week three-day rally before making another high to complete the correction. Subsequent topside resistance levels are eyed at the 61.8% extension at 1.2418 (initial objective on a pullback), 1.2465, and the 1.25-handle. Interim support rests with the 38.2% extension at 1.2350 backed by 1.2309, 1.270, and 1.2241. 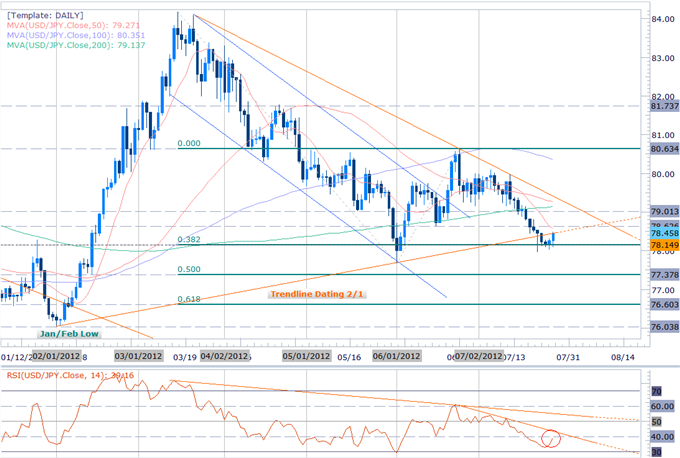 The Japanese yen is the weakest performer for a second consecutive session with a loss of 0.23% on the session despite broader dollar losses. The improved risk appetite has continued to reduce demand for the low yielder with the yen falling against all its major counterparts in early US trade. The daily chart shows the USDJPY holding above the 38.2% Fibonacci extension taken from the March and June highs at 78.15 with interim resistance eyed at the June 15th swing low at 78.63. The three wave rally off the June 1st lows seems to be corrective in nature, suggesting that the broader bias on the pair remains weighted to the downside. Seeing as how this interpretation goes against our broader fundamental bias, we remain neutral at these levels pending a run-up to the trendline resistance dating back to the March highs (currently around 7940) or a break below the 78-figure. 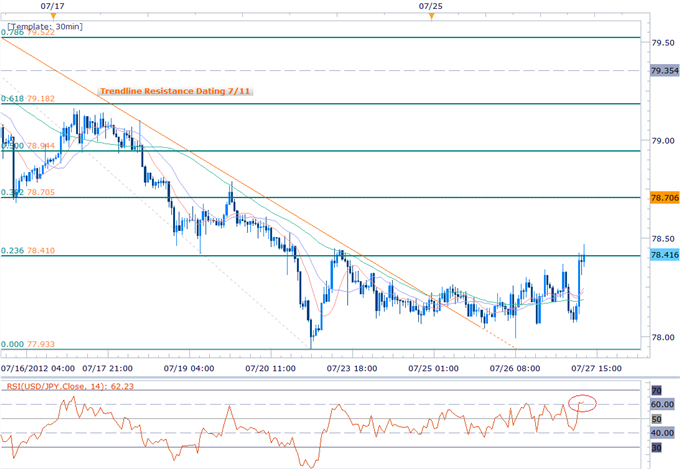 The hourly chart shows the USDJPY testing interim resistance at the 23.6% Fibonacci retracement taken from the July 11th decline at 78.40 with a breach above this level eyeing subsequent topside targets at the 38.2% retracement at 78.70 and the 79-handle. Intra-day support levels stand at 78.07 backed by the July lows at 78.93. Note that with a daily average range (ATR) now just coming off lows not seen since January, scalps in the USDJPY are not recommended but rather should be used as reference for longer-horizon trade setups.