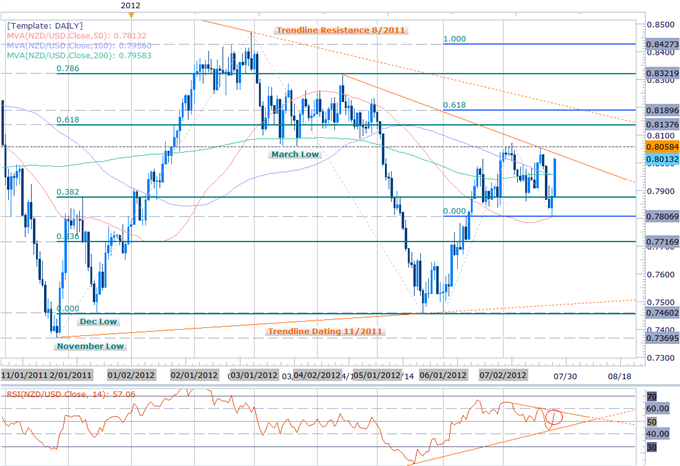 The New Zealand dollar is the top performer against a weaker greenback at the close of European trade with an advance of 1.58% on the session. Risk sentiment surged today on the back of remarks made by European Central Bank President Mario Draghi who vowed to defend the euro at all costs. While we have heard this type of rhetoric before, markets have taken solace amid expectations for further central bank easing with global equity markets posting a substantial rally across the board. On the data front, the Reserve Bank of New Zealand left rates unchanged at 2.50% last night for the eleventh straight meeting with Governor Alan Bollard citing risks from Europe’s fiscal crisis and a tamed outlook for inflation. It seems as though the RBNZ may be nearing the end its easing cycle with the central bank well positioned to start normalizing policy should global economic conditions stabilize. The release prompted a rally in the kiwi that lasted into the open of US trade today with our medium-term bias now shifted to the topside.

The NZDUSD broke above the confluence of the 100 & 200-day moving averages around 7955 with the pair now eyeing trendline resistance dating back to April highs. The three wave decline off the July highs looks to be corrective in nature, suggesting that medium-term bias weighted to the topside. That said, it’s important to note that a breach (regardless of magnitude) above the monthly highs satisfies expectations of this rally with an RSI breach above the 60-mark eyeing initial objectives at the April lows at 8087 the 61.8% Fibonacci extension taken form the November and May lows at 8137. Interim daily support now rests with the 38.2% extension at 7880 backed by the confluence of the monthly low and the 50-day moving average just above the 78-handle. 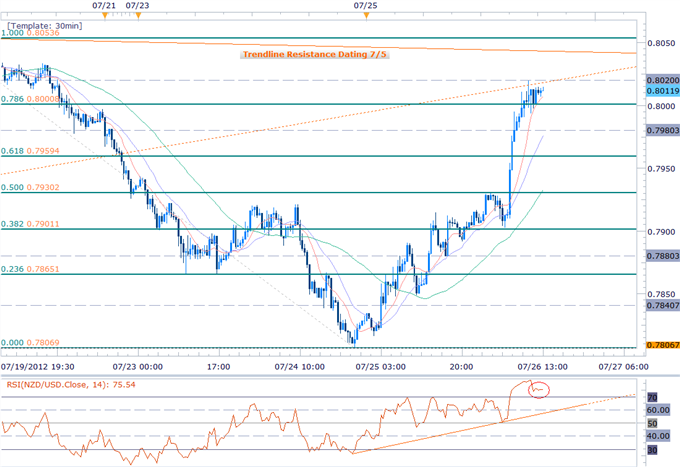 A look at the 30min scalp chart shows the NZDUSD encountering soft resistance at 8020 with a breach above this level eyeing subsequent ceilings at 8053 (7/19 high) and 8075 (monthly high). Interim support rests with the 78.6% Fibonacci retracement taken from the July 19th decline at the 80-figure backed by 7980, the 61.8% retracement at 7960, and 7930. Note that RSI remains at elevated levels with a break below the 70-mark suggesting a short-term correction before continuing higher. 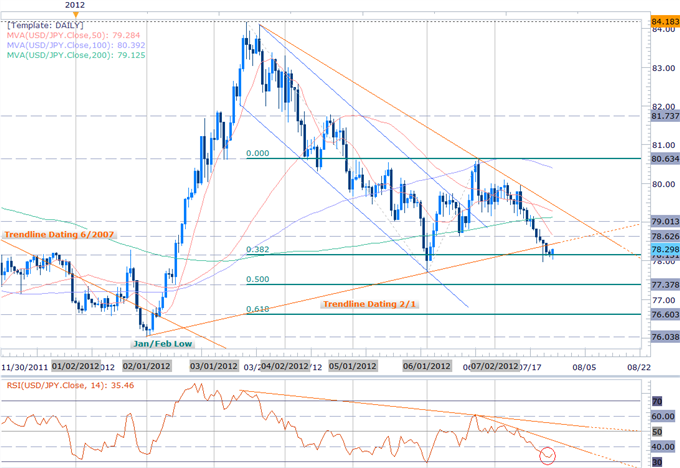 The Japanese yen is the weakest performer with a loss of 0.20% on the session despite broader dollar losses. The improved risk appetite has reduced demand for the low yielder with the yen falling against all its major counterparts in North American trade. The daily chart shows the USDJPY holding above the 38.2% Fibonacci extension taken from the March and June highs at 78.15 with interim resistance eyed at the June 15th swing low at 78.63. The three wave rally off the June 1st lows seems to be corrective in nature, suggesting that the broader bias on the pair remains weighted to the downside. Seeing as how this interpretation goes against our broader fundamental bias, we remain neutral at these levels pending a run-up to the trendline resistance dating back to the March highs (currently around 7940) or a break below the 78-figure. 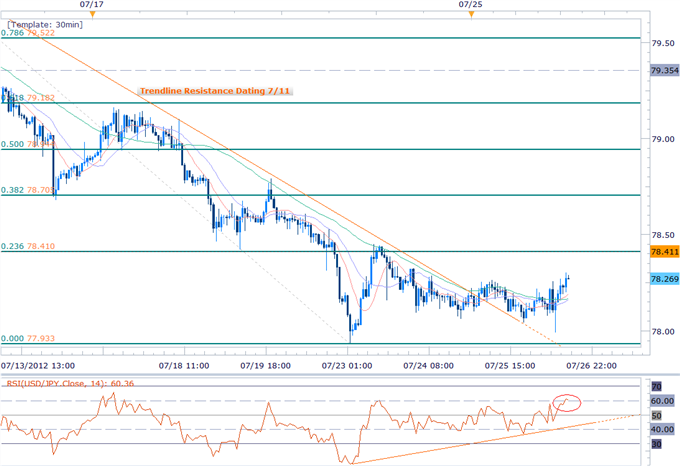 The hourly chart shows the USDJPY holding an incredibly tight range over the past few sessions as the pair drifts between the monthly lows and the 23.6% Fibonacci retracement taken from the July 11th decline at 78.40. Subsequent topside resistance targets are eyed at the 38.2% retracement at 78.70, 78.95 and the 61.8% retracement at 79.18. A break below interim support at 79.90 exposes support targets at 77.65 (June low) and 77.35. Note that with a daily average range (ATR) now reaching lows not seen since January, scalps in the USDJPY are not recommended but rather should be used as reference for longer-horizon trade setups.