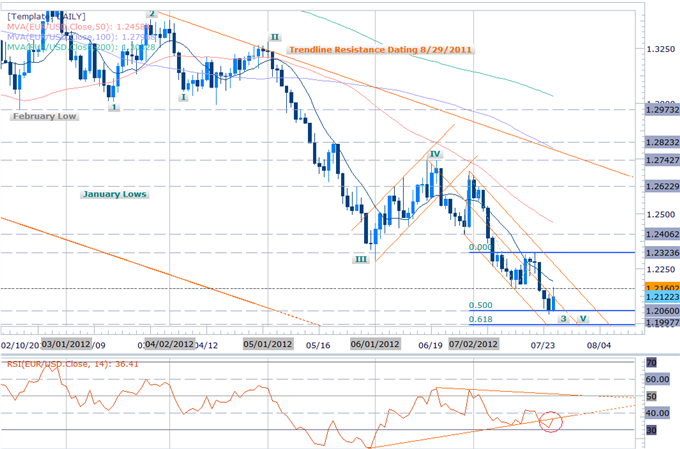 The euro is the strongest performing currency at the close of European trade with an advance of 0.55% on the session. Markets have taken a reprieve from the recent risk sell-off after remarks made by ECB policymaker Ewald Nowotny suggested that there is now a stronger argument to grant the European Stability Mechanism (ESM- Europe’s permanent bail-out fund) a banking license. While this step does little to address the underlying structural deficiencies within the union, the move temporarily eased liquidity concerns with yields on periphery debt softening in early US trade.

The EURUSD rebounded off the 50% Fibonacci extension taken from the June 29th and July 19th crests at 1.2060 before breaching above the bisector line of a descending Andrew’s Pitchfork formation. The advance encountered resistance at the July 13th low at 1.2160, with an RSI breach above former trendline support likely to fuel a rally up to channel resistance (currently around 1.2240). Our broader bias remains weighted to the downside with rallies in the single currency offering favorable short entry positions. A break below interim support at 1.2060 eyes our primary objective at the 61.8% extension at the 1.20-handle. 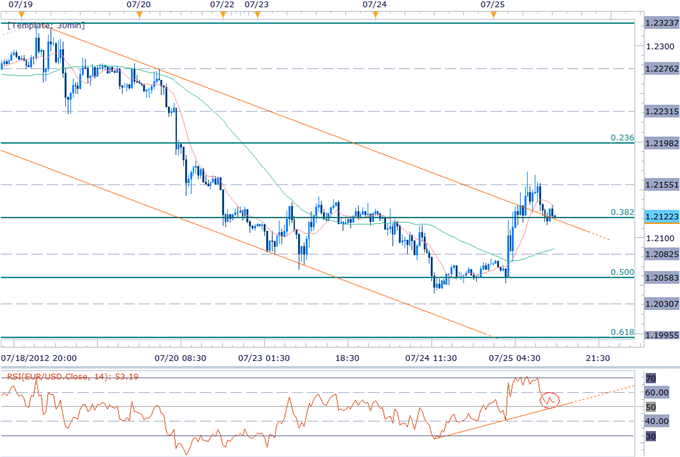 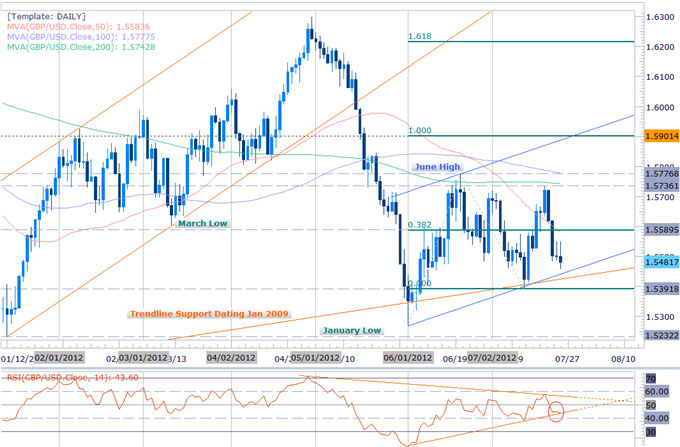 The British pound is the weakest performer on the session with a decline of 0.21% on the session despite broader dollar losses. Second quarter GDP data released today has continued to weigh on the sterling after the report showed the UK economy contracting at an annual pace of 0.8%, far surpassing expectations for a contraction of just 0.3% y/y. The data suggests that the austerity measures recently implemented may be weighing on growth prospects with the scenario opening up the door for further easing measures from the BoE.

The GBPUSD remains within the confines of an ascending channel formation with losses likely to be limited over the next 24-hours amid ongoing dollar weakness. Daily resistance stands at the confluence of the 50-day moving average and the 38.2% Fibonacci extension taken from the June 1st and July 12th lows at 1.5590. A breach here targets the July high at 1.5736 backed closely by the 200-day moving average at 1.5743. Channel support currently rests around 1.5445 backed by long standing trendline support dating back to the January 2009 lows and the July low at 1.5390. Our medium-term bias remains neutral with long-term technicals suggesting further advances in the pair moving later in the year. 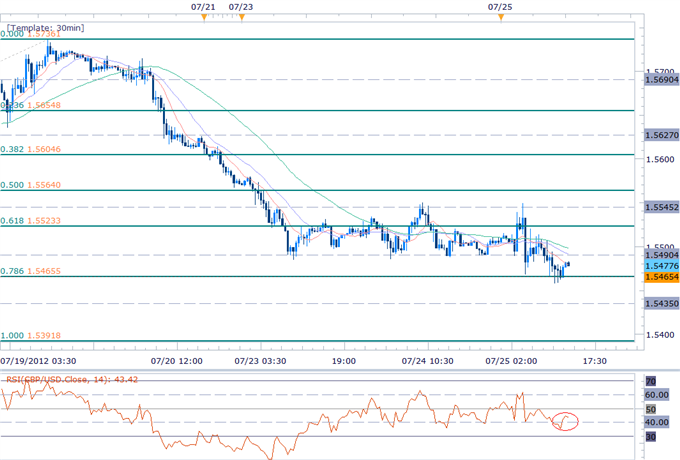