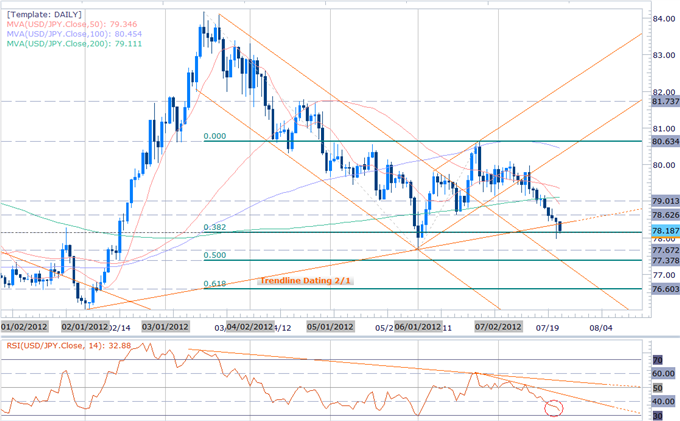 The Japanese yen is the top performer against the greenback for a second consecutive session with an advance of 0.26% on the session. Risk aversion has persisted in early US trade with equities deep in the red after an extremely disappointing miss on the Richmond Fed Manufacturing Index and ongoing concerns regarding rising yields in periphery government debt with the Spanish 10yr climbing to a record 7.51%. US Treasury yields are weaker on the session with the 10yr now at a record low at 1.40%.

The USDJPY continues to hold just above key daily support at the 38.2% Fibonacci extension taken from the March and June highs at 78.13. While a long position here is tempting from a risk/reward standpoint (buying against the June lows at 77.67), it’s important to note that the pair may remain under pressure amid persistent risk-aversion flows as positive real interest rates in Japan continue to support the yen. A break below the June lows eyes strong support at the confluence of former channel resistance and the 50% extension at 77.40. Interim resistance stands at 78.60 (June 15th swing lows) backed by the 79-handle. Look for a daily RSI break above trendline resistance dating back to June 21st to signal the possible onset of a reversal for the pair. 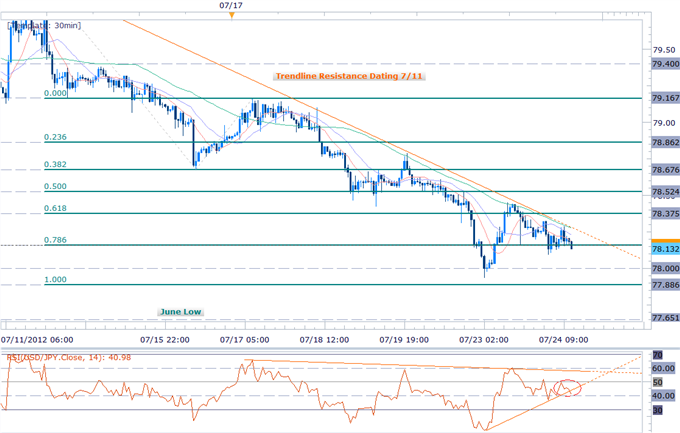 A look at intra-day price action sees the USDJPY continuing to hold below trendline resistance dating back to the July 11th high (noted in yesterday’s report) with the pair currently probing below interim support at the 78.6% Fibonacci extension taken from the July 11th and 17th crests at 78.15. A break below this mark eyes subsequent floors at the 78-figure, the 100% extension at 77.88 and the June lows at 77.67. A breach above trendline resistance alleviates further downside pressure in the near-term with such a scenario eyeing topside targets at the 61.8% extension at 78.37, 78.52, and the 38.2% extension at 78.67.Note that with the daily average true range now reaching lows not seen since January, scalps in the USDJPY are not recommended but rather should be used as reference for longer-horizon trade setups. 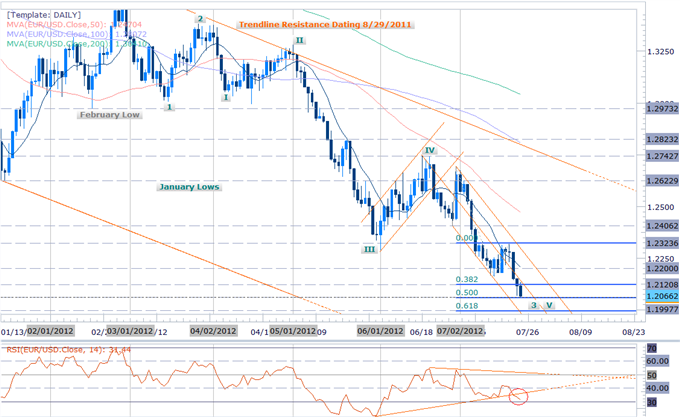 The euro is the weakest performer at the close of European trade with a decline of 0.39% on the session. The single currency has now triggered our initial objective at the 50% Fibonacci extension taken from the June 29th and July 19th crests at 1.2060 with the pair continuing to hold within the confines of a descending Andrew’s Pitchfork formation. Key daily resistance now stands at the confluence of the channel bisector line and the 38.2% extension at 1.2120 and is backed by the 1.22-handle. A break below interim support eyes our primary objective at the 61.8% extension at the 1.20-figure. Note that the RSI break below trendline support bodes well for our setup with a move below the 30-oversold level triggering shorts to our primary objective. 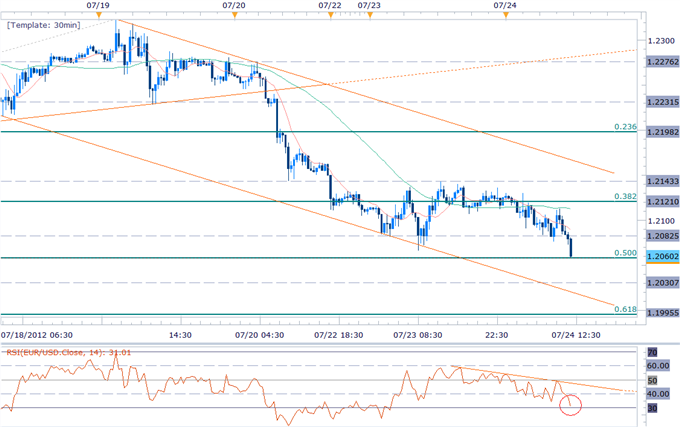 The scalp chart shows the EURUSD trading within the confines of an embedded descending channel formation with the pair testing interim support at the 50% extension at 1.2060. Subsequent intra-day support targets are eyed at 1.2030 and the 1.20-handle. Interim soft resistance stands at 1.2082 backed by 1.2120 and 1.2145. A breach above the July 13th swing low at 1.2161 alleviates further downside pressure in the near-term with such a scenario risking a rally up to the 1.22-figure.