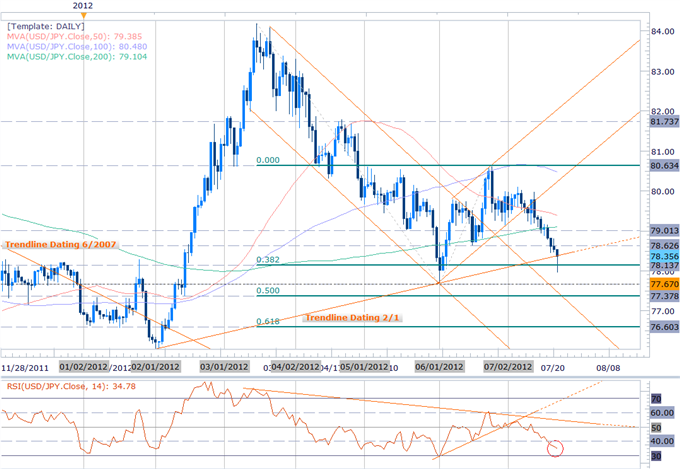 The Japanese yen is the top performer against a stronger greenback early in the week with USDJPY off by 0.32% on the session. Equity markets kicked off the week substantially weaker across the board with ongoing concerns over rising yields on Spanish debt and a possible Greek exit prompting risk-aversion flows to the benefit of the Japanese yen and the dollar. The US 10yr Treasury note hit record lows in overnight trade at 1.43% as investors rushed into the perceived safety of US debt with equities off by 1.1-1.8% across the board in early New York trade.

The USDJPY broke below trendline support dating back to the February lows before briefly probing below the 38.2% Fibonacci extension taken from the March and June highs at 78.13. Although our long-term bias on the pair remains weighted to the topside, it is very difficult to justify a short yen trade in a falling interest rate environment with continued risk-off flows likely to limit topside advances in the interim (notwithstanding any intervention threats from Japanese officials). However, the snapback in early US trade does suggest we may hold this low in the near-term with a breach above soft resistance at 78.63 (6/15 swing low) likely to alleviate further downside pressure. Note that daily RSI has now broken below the 40-mark for the first time since early June, suggesting that the broader trend for the pair still remains weighted to the downside in the near-term. 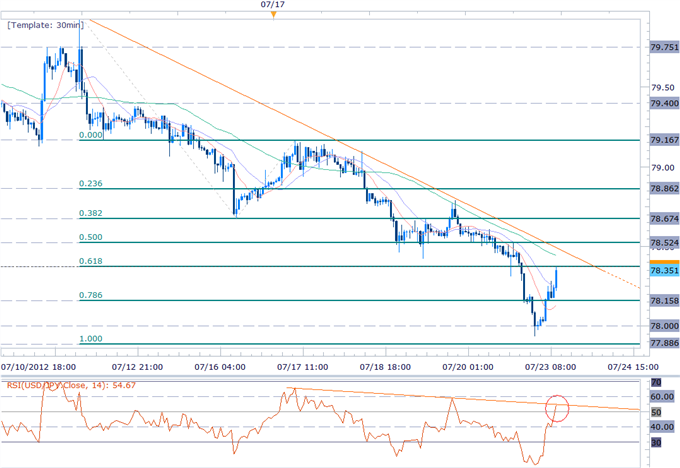 A look at intra-day price action sees the USDJPY rebounding sharply at the 78-handle, just above the 100% Fibonacci extension taken from the July 11th and 17th crests at 77.88. Interim resistance stands at the 61.8% extension at 78.38 backed by 78.50 and the 38.2% extension at 78.67. Support rests with the 78.6% extension at 78.15 backed by the 78-figure and 77.88. Note that with the daily average true range now reaching lows not seen since January, scalps in the USDJPY are not recommended but rather should be used as reference for longer-horizon trade setups. 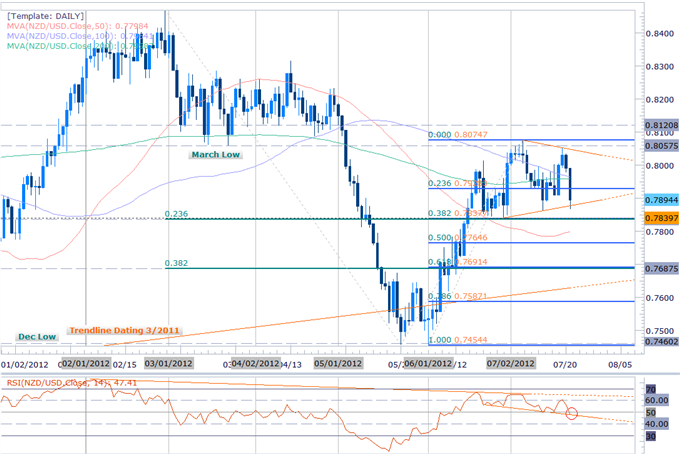 The New Zealand dollar is the weakest performer at the close of European trade with a loss of 1.28% on the session. The NZDUSD broke below the 23.6% retracement taken from the June advance at 7930 before encountering trendline support dating back to the June 28th lows. Critical support, which we highlighted a few weeks back in the Kiwi Scalp Report, remains at the confluence of the 38.2% retracement and the 23.6% Fibonacci extension taken form the February and July highs at 7840. A break below this mark eyes subsequent floors at the 50-day moving average at the 78-figure and the confluence of the key 61.8% retracement and the 38.2% extension at 7690. Interim daily resistance stands at the opening range high for this week at 7990. 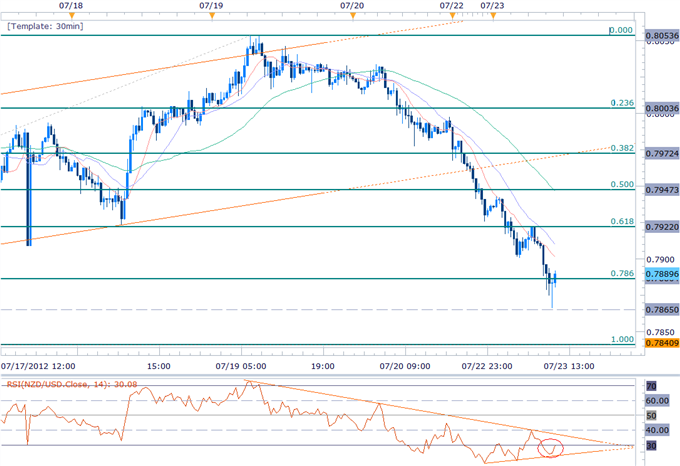 The scalp chart shows the NZDUSD rebounding of soft support at 7865 before attempting to mount the 78.6% Fibonacci extension taken from the July 5th and 19th crests at 7885. Note that RSI has continued to consolidate into the apex of a wedge formation with a pending break-out likely to offer an intra-day directional bias from here. Interim support targets are eyed at 7865 and the 100% extension at 7840 (level highlighted on our daily chart). Resistance stands with the 61.8% extension at 7922 backed by 7850 and 7970. Look for a pullback in the pair over the next 24 hours with rallies offering favorable short-entries.