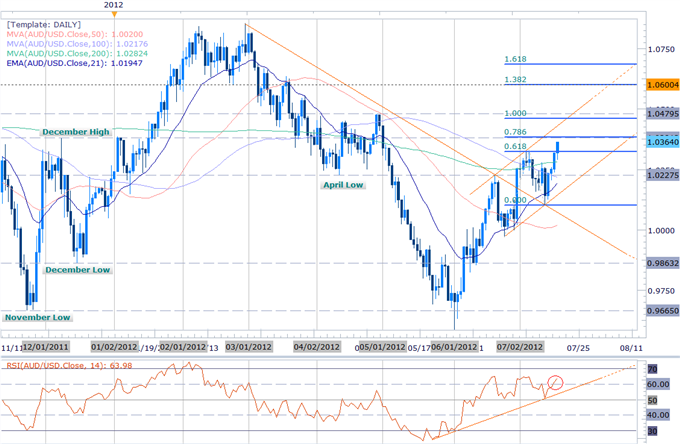 The Australian dollar is the top performer for a second consecutive day with an advance of 0.44% on the session at 1pm in New York. Equity markets are well supported on the back of Fed Chairman Ben Bernanke’s testimony before the Senate Banking Committee yesterday and the House Financial Services Committee today with market participants renewing expectations for further easing from the central bank. Despite broader market interpretations, we maintain our view that the Fed is unlikely to move on policy at the next meeting as the June employment report precedes the FOMC rate decision, with the central bank unlikely to implement further easing measures ahead of the critical NFP report. As such, we maintain our broader bias with the recent aussie advance likely to persist in the short-run.

The daily charts shows the AUDUSD breaking above the former July high at 1.0330 with the pair now trading within a newly identified ascending channel formation dating back to June 25th low. We noted this possibility in yesterday’s report with the move now invalidating our previous daily setup. Topside daily resistance is now seen at the confluence of the December highs and the 78.6% Fibonacci extension taken from the June 25th and July 12th lows at 1.0380 with subsequent ceilings seen at channel resistance (currently around 1.0420), the 100% extension at 1.0460 and the April highs at 1.0480. Interim daily support now rests with the 61.8% extension at 1.0325 backed by the 200-day moving average at 1.0280. 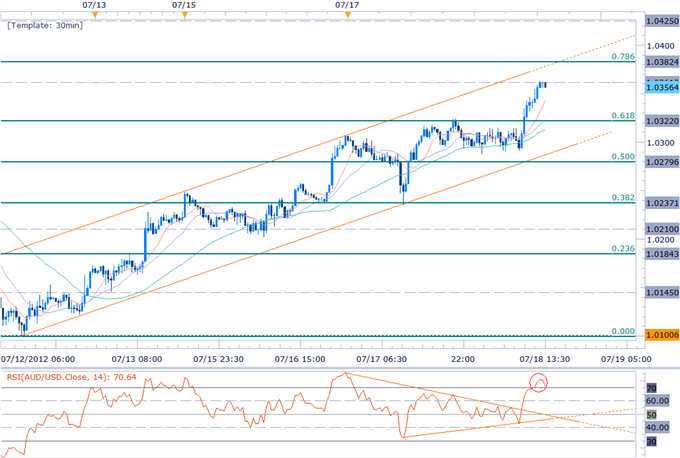 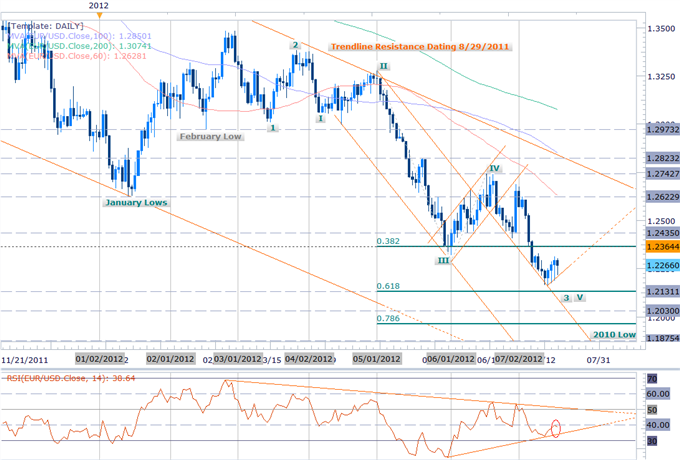 The euro is the weakest performer against the dollar with the pair off by 0.20% late in the session. The losses as yields on periphery debt continued to climb with the euro struggling to find direction over the past few sessions. While the broader bias for the single currency remains weighted to the downside, the pair is likely to remain in consolidation in the near term as daily RSI continues to narrow into the apex of a wedge formation. Our initial objective remains the 61.8% Fibonacci extension taken form the May and June highs at 1.2130 backed by 1.0230 and the 78.6% extension at 1.1965. A breach above the weekly high at 1.2315 eyes daily resistance at the 38.2% extension at 1.2365 backed by soft resistance at 1.2435. 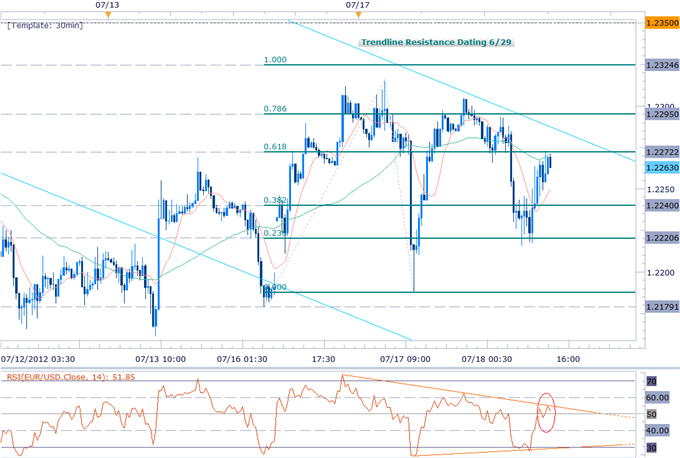 The scalp chart shows the EURUSD trading within the confines of a descending Andrew’s pitchfork formation with a short-term Fibonacci extension taken from the July 16th and 17th lows highlighting interim resistance at the 61.8% Fibonacci extension at 1.2272. Note that RSI continues to hold below trendline resistance with a topside break risking a breach above channel resistance, with such a scenario subsequent ceilings at 1.2295, the 100% extension at 1.2325 and 1.2350. Interim support rests with the 38.2% extension 1.2240 backed by 1.2220 and the weekly low at 1.2180.