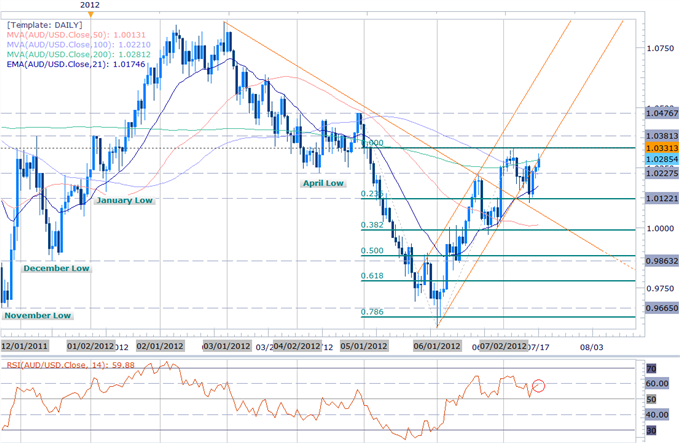 The Australian dollar is the top performer on the session with an advance of 0.34% in New York afternoon trade. Minutes from the latest RBA policy meeting proved to be more optimistic than anticipated with investors paring back expectations for further rate cuts from the central bank. Credit Suisse overnight swaps are now factoring a reduced 48% chance of a 25basis point cut at the next meeting with twelve month expectations still calling for another 100basis points in additional cuts. Fed Chairman Bernanke’s testimony before the Senate Banking Committee today fueled whipsaw action in currency markets as his initial remarks offered no new hope for any immediate additional easing from the central bank. Interestingly Bernanke did note that a weaker greenback may be beneficial for the domestic economy, with the dollar surrendering early gains to trade lower on the session.

The daily charts shows the AUDUSD struggling to break above the confluence of former channel support and the 200-day moving average at 1.0281. A close above this mark exposes subsequent resistance targets at the July high (1.0330), 1.0380 and the April highs at 1.0475. Interim daily support remains with the April lows at 1.0227 backed by the 23.6% Fibonacci extension taken from the April and July crests at 1.0122. We maintain our bearish outlook on the aussie so long as 1.0330 is respected with a break above this mark invalidating this particular setup. 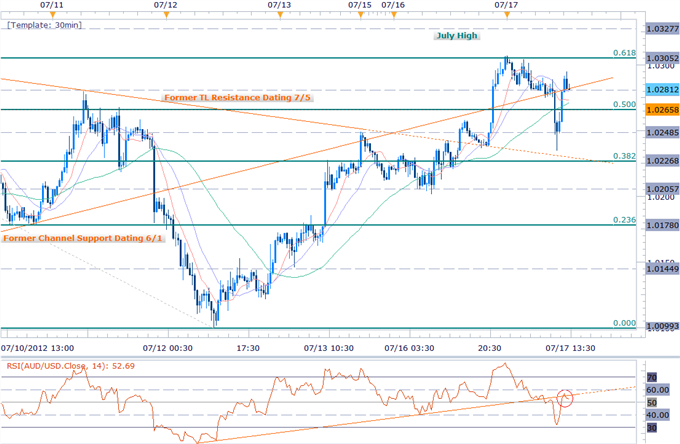 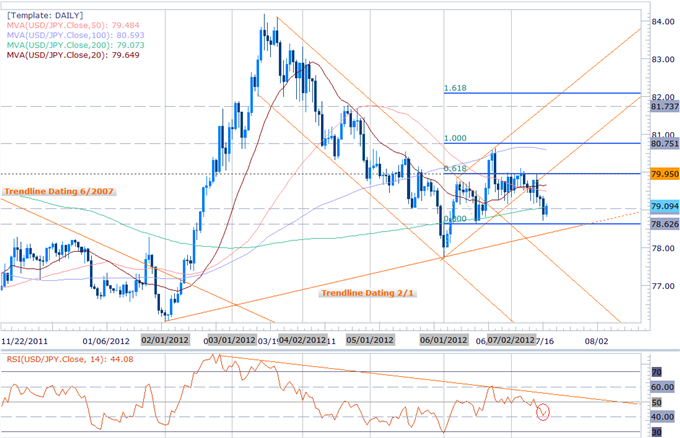 The Japanese yen is the weakest performer against the greenback with a decline of 0.28% on the session. The low yielder is lower against all its major counterparts today as yields on US Treasuries rose with the USDJPY moving back above the 200-day moving average just above the 79-handle. Although the rebound bodes well for our longer-term directional bias, the pair may yet see further downside before continuing higher with daily support seen at the June 15th low at 78.62 backed by trendline support dating back to the February lows. A break below this level invalidates our bias. Initial topside resistance is eyed at the Sunday high at 79.37 backed by the 61.8% Fibonacci extension taken from the June 1st and 15th troughs at 79.95 with breach above the 100% extension at 80.75 (June highs at 80.63) offering further conviction on our bullish outlook. 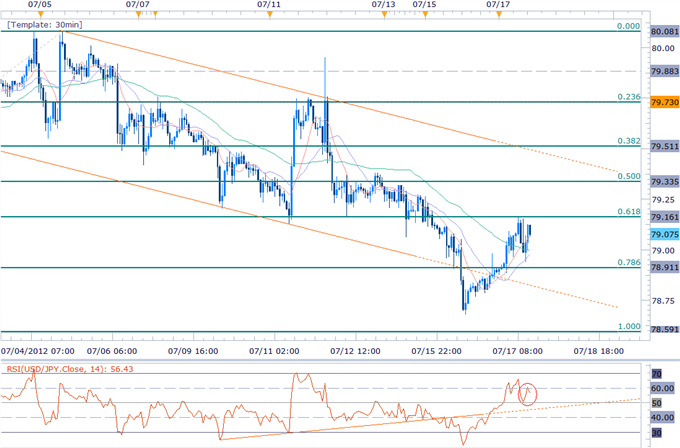